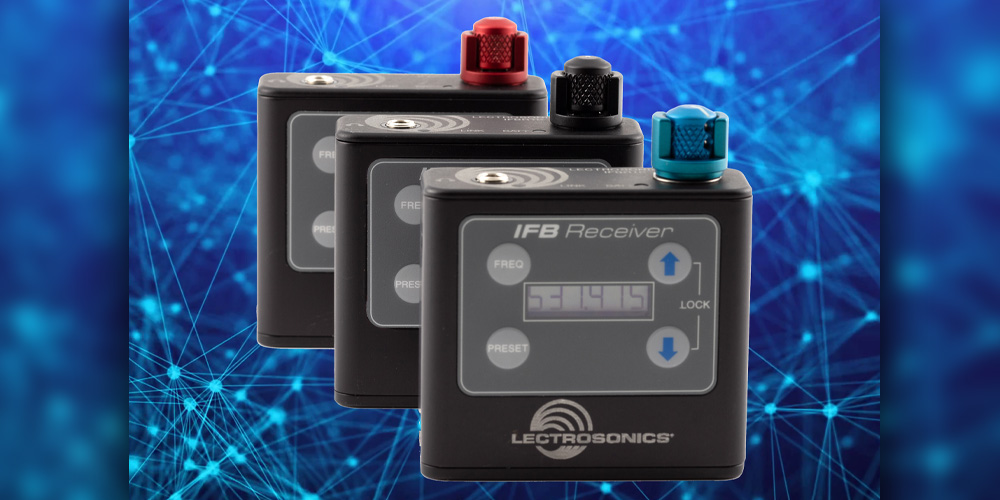 Rio Rancho, NM (March 17, 2020) -- Lectrosonics is pleased to announce the introduction of a new miniature IFB (Interruptible Foldback) Receiver pack, the IFBR1B, as well as the companion CHSIFBR1B Dock Charging System. The next-generation receiver unit is nearly half the size and weight of the industry-standard IFBR1A receiver that it is replacing and uses a slim 3.7V LB-50 rechargeable lithium ion battery instead of the archaic 9V type. The new IFBR1B is fully compatible with the existing line of IFBT4 transmitters, so that adding the convenience and new features of the IFBR1B receivers to existing Lectrosonics IFB systems is quick and easy. With a backlit LCD and membrane buttons, the new receiver is easy to set up and use, offering 10 presets which are easily programmable from the front panel.

Five tuning ranges are available for the new IFBR1B receiver: the VHF version (red knob) covers 174-216 MHz, the A1 (470-537 MHz), B1 (537-614 MHz) and C1 (614-692 MHz) versions (blue knob) cover the UHF TV frequencies for most countries, and the 941 Band version (black knob) covers the North American license-only 941-960 MHz range. Future firmware updates can be installed in the IFBR1B in the field via the USB jack on the bottom of the unit. The IFBR1B comes standard with a wire belt clip for light weight and easy placement. An optional “clamp” style belt clip, part number IFBR1BBCSL, is also available, and easily installed with two small screws.

The system’s new companion dock charging system, the CHSIFBR1B, is capable of charging up to four receivers or four batteries in any combination. The charging dock can be also be ganged in groups of up to four, powered by a single power supply, allowing charging any combination of up of to 16 units or 16 batteries.

“Building upon the years of success of the IFBR1A, Lectrosonics is responding to input from our valuable customers who have been asking for a smaller unit with dock charging capability and some additional convenience features,” explains Karl Winkler, VP of Sales and Marketing at Lectrosonics. “We are very pleased to announce our new IFBR1B receiver to meet those needs.”

The new IFBR1B receiver pack and CHSIFBR1B charging system will be available in Q2, 2020. MSRP for the receiver pack is $996, and the charging dock is $665 (not including power supply). Available in April 2020.