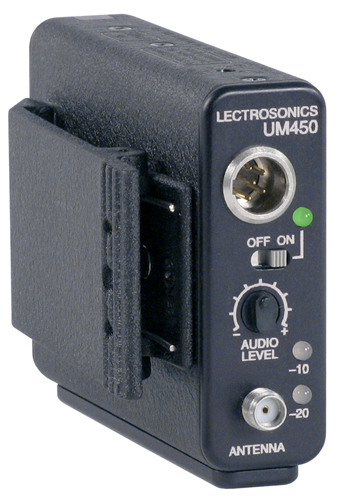 Rio Rancho, NM – April 2007… Lectrosonics, recognized the world over as a leading manufacturer of wireless microphone systems and audio processing products, is introducing a new transmitter and new versions of its most popular transmitters at NAB 2007 (booth # N8116) in Las Vegas, Nevada. The UM450 is a new Digital Hybrid Wireless™ belt-pack transmitter with a current-servo input and 250mW RF output for exceptional range and resistance to interference. The UM400a, a new version of Lectrosonics’ most popular transmitter, is also gaining the current-servo input circuit originally developed for the SM Series. The new input enables a wider range of microphone sensitivities and provides a straightforward microphone wiring method.

In the revised SM Series, including the SMa 100mW transmitter, SMDa dual-battery unit, and SMQa 250mW transmitter, a variable high-pass filter has been added with control via the front panel menus. A 3 dB down point is selectable between 35 Hz and 150 Hz, allowing the transmitters to be optimized for full range audio or voice transmission, depending on the intended application. In addition, all the transmitters in the SM Series will now include a Gore-Tex™ pressure-equalizing membrane to prevent moisture from entering the housing resulting from expansion and contraction of the air inside the unit due to rapid temperature changes.

On the MM400C, the formerly removable antenna connector (SMA) has been replaced by a newly developed, fixed antenna to increase the water resistance for the most severe weather and environmental conditions.

All current Lectrosonics 400 Series transmitters feature Digital Hybrid Wireless™ technology, thus avoiding distortion due to compandor artifacts when used with compatible receivers in 400 Mode. In addition, these transmitters offer compatibility with analog receivers from Lectrosonics and two other manufacturers.