Gotham Sound Gears Up for Lost in Space with Lectrosonics 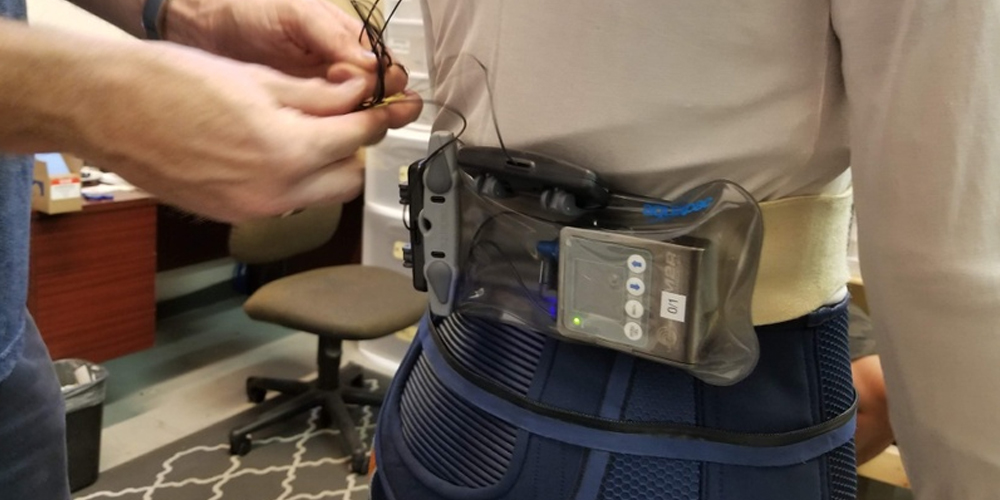 “If we could do season 2 over, we would still use the Lectrosonics Duet system!”

Long Island City, NY (December 24, 2019) — The Netflix series Lost in Space was recently re-upped for a second season, scheduled to premiere this Christmas. The reimagining of the iconic 1960s sci-fi series earned an Emmy nomination, and for season 2, New York-based Gotham Sound faced a challenge equal to the Robinson family surviving on a strange planet: Design a communications and IFB system on which actors clad in space suits could hear everything - and integrate the whole think into Production Sound Mixer Graham Timmer's rig in time for the start of season 2 while adding minimal gear to the already elaborate costumes. Gotham’s Peter Schneider chose the Duet system from Lectrosonics, comprising two M2T transmitters and eight M2R receivers.

“The need was to have a system where all the actors could hear each other as well as direction,” explains Schneider. “They really needed each actor to have their own mix, minus their own voice when they spoke. Number one, it would bleed into the microphone mounted inside their space suit, and it’s distracting. Number two; there was the possibility of feedback because the acoustics inside the space helmet were very lively. It was designed to be visually appealing. It was mostly glass, which made it a very small echo chamber. If there were only one IFB mix for all the actors, any one suit having feedback issues would be heard by all.

“Here’s why I immediately spec’d out the Duet in-ear system,” Schneider continues. “First of all, dialogue on season 1 was recorded via Lectrosonics SMQV transmitters mounted inside the suits, and the team was very impressed with their reliability and sound, so we were going to continue using those and needed something that would dovetail with them in terms of frequencies. As for the M2Ts, I chose them because of the quality of the audio and also the spectrum efficiency. Each unit is only a half-rack in size, and has two channels but because of the digital transmission, I can get two talk paths from one carrier signal. So that’s four talk paths per unit. With two M2Ts side by side, that’s eight audio paths in a single rack space, which was important because the rig had to be very portable.”

Given the nature of the costumes, Lectrosonics’ reliability, agile frequency pairing, and “set it and forget it” operation proved to be of very practical value on the Lost in Space set. “As I learned when I got on set for some preliminary testing, the space suit is time-consuming to put on and take off, requiring the help of two other people. So, once the M2R was in place, having to get in there to tweak something would be a huge interruption to the production. We went with a combination headset from DPA, inherited from and established on Season 1, which included both mic and earpiece, and had two connectors. The mic was routed to the SMQV via a TA5F connector, and the earpiece portion took the actor’s IFB mix from the M2R via a 1/8-inch mini plug. This was hidden inside the space helmet.”

How did these setups perform in the hostile environment of an alien world? “It definitely lived up to the challenges,” reflects Schneider. “Lectrosonics support was there hand-in-hand for us the whole time. They went above and beyond and I’m really grateful, but the bottom line is, the system worked. The reliability of the reception from the actors’ SMQV packs to the mixer, then the reliability of the IFB transmission back to the actors’ M2Rs, were both unmatched.”

As if dialogue and IFB mixes for eight actors isn’t taxing enough on the available frequency spectrum, production mixer Graham Timmer pointed out that the RF environment could get even more crowded still. “We were shooting in Iceland at one point,” he recalls. “They already have 5G networks all over the place — basically the whole island is wired. We still had no problems with the Duet system, even though we were pushing the range to its limits. I just had them on whips, not power-boosted antennas or anything, and the sound quality and channel isolation were bulletproof. I really liked that you could have a single transmitter sending a different talk path to each of four receivers.”

“We were even able to pump in ‘voice of God’ plus a channel so the assistant director could talk to actors if he put his walkie-talkie on a certain frequency,” adds Schneider. “The wideband nature of the whole system really saved us. Another thing is that the system natively runs on 12 volts DC, which was important as we did so much traveling.

“We think this setup is pretty unique for a film or TV set,” Schneider sums up. “If you were to talk about mics, transmitters, and receivers pressed up inside very tight space suits, maybe that’s not a use case Lectrosonics’ engineers thought of in advance, but the gear performed brilliantly. “If we could do season 2 over, I’m sure we’d find ways to improve our workflow, but one thing is for sure: We would still use the Lectrosonics Duet system!”