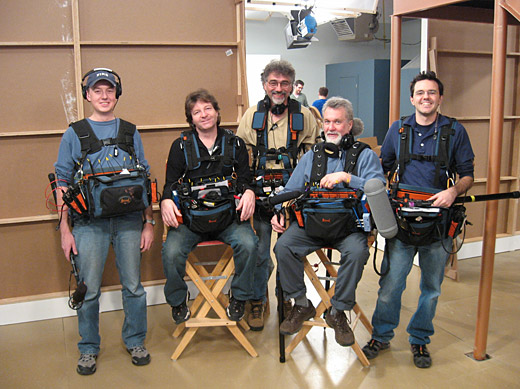 Toronto, Canada… The prospect of using as many as sixteen wireless transmitters on any project is enough to make many audio engineers more than a little apprehensive, but that’s exactly what Peter Hamilton faced at the start of Season 2 production for From the Ground Up with Debbie Travis, a reality-based TV show that airs on Global Television, one of Canada’s three national TV networks. Compounding the challenge was the fact that much of the production takes place within a 45 x 90 foot space, and all 16 transmitters were to operate within the same narrow frequency range. While this may sound like a recipe for catastrophe, Hamilton made it all work—thanks to solid audio engineering skills and the Digital Hybrid Wireless™ technology found in Lectrosonics wireless equipment.

Produced by Toronto-based RTR Media Inc.—a partnership between Hans Rosenstein, Debbie Travis, and Kit Redmond— From the Ground Up with Debbie Travis focuses on home building and design. Through the instruction she provides to her on-camera protégés, the show helps viewers better understand and appreciate how the various trade skills can help them achieve great living. Debbie’s House, as it’s known among those involved with the show, is shot on location—primarily throughout Ottawa, Ontario.

Peter Hamilton, the show’s Audio Supervisor, discussed the circumstances that led to using so many wireless transmitters within such a narrow frequency range, or block. “When it came time to start production, we were only able to acquire sixteen block 24 microphones, so because of the time constraints in terms of putting the show’s technical aspects together, we did some research and spoke with the folks at Lectrosonics in order to better grasp the challenge and, hopefully, ensure we weren’t going to have any major RF complications on site when we were shooting. We quickly discovered we were the first in Canada, if not elsewhere, to use the equipment in this capacity and, I should note, we encountered no issues whatsoever.”

“Because there are sixteen available frequencies within a block and we were using all of them,” continued Hamilton, “we knew the potential for crosstalk and other RF issues could rear its ugly head. Thanks to some very skilled and savvy mix engineers, we’ve been able to operate successfully throughout production. We’ve been shooting simultaneously with four and sometimes five cameras, so we’ve had one mixer assigned to each camera, and each mixer was equipped with four Lectrosonics UCR411a receivers. Depending upon what any given camera was shooting, the mix engineer could dial up any of the sixteen RF microphones as required to compliment the boom mic. I consider our success a direct result of skilled engineering capability and well designed wireless equipment.”

As of this writing, Hamilton and others on the production crew of Debbie’s House are finishing up the final episode for the new season. Season 2 will begin airing in late spring 2007 and run through February 2008.

Reflecting on the nearly completed Season 2 production schedule, Hamilton summarized his experience with Lectrosonics equipment. “I’ve used Lectrosonics equipment off and on for several years,” said Hamilton, “but I only began using the SM Series transmitters last year. We had no equipment failures in regards to the RF, and reliability has been exceptional. Similarly, the 411s performed flawlessly. I can’t recall so much as a single dropout occurring. I’m currently specifying equipment for a new show that will start production in February of this year—another national reality-based TV show—and I’m planning on going with Lectrosonics!”

The Lectrosonics equipment used on Debbie's House was provided by the Trew Audio rental department in Toronto, CA.