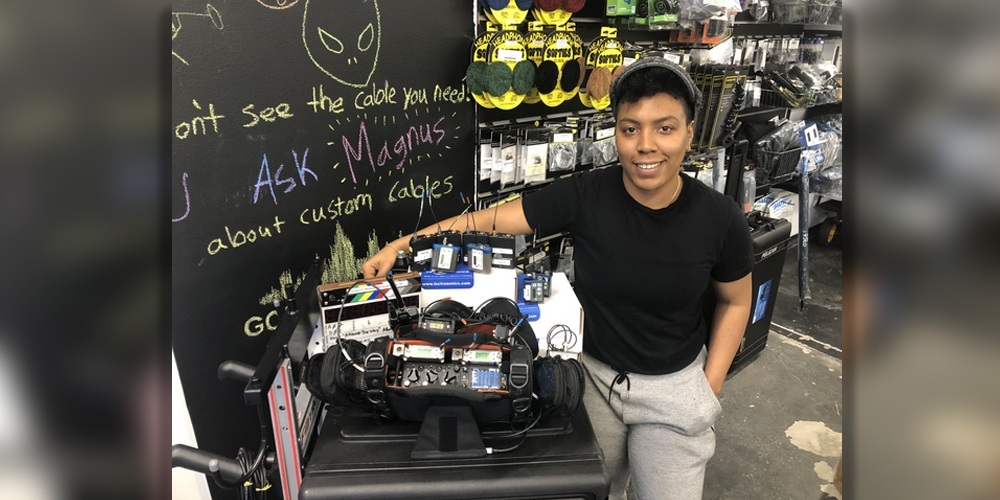 “I exclusively use Lectrosonics because they’re known in the industry for their rock-solid equipment and how well they perform on dialogue.”

Atlanta, Georgia (March 12, 2019) – Sound mixer Chykeria Thompson is a power-house of skill, heart, and drive bringing her brand of positive personality and professionalism to each of her projects. Founder of Sound Speeds, Thompson’s list of credits include TV series such as The Walking Dead, Emmy award-winning television show Atlanta Eats, documentaries This World is Not My Own and Hope & Fury: MLK, the Movement and the Media, and the upcoming Around the Way for Hulu. Sound utility credits include well-known films like The Hunger Games: Catching Fire starring Jennifer Lawrence and Lila & Eve starring Viola Davis and Jennifer Lopez. Thompson’s commercial clients include Adidas, Apple, Coca-Cola, Home Depot, Hyundai, Lexus, Nike, Nikon, Porsche and Spanx. Wherever her impressive clients take her, Thompson packs her full arsenal of Lectrosonics gear which includes the SMQV belt-pack transmitter, the SPDR and PDR portable digital audio recorders, and IFB systems.

“I exclusively use Lectrosonics because they’re known in the industry for their rock-solid equipment and how well they perform on dialogue. I was trained as a utility on Lectrosonics was and when I was able to buy my own gear I bought Lectrosonics and still use the gear more than 12 years later,” says Thompson.

Thompson started her career with the help of Atlanta-based sound mixer Whit Norris after graduating in 2010 from The Art Institute of Atlanta with a BA in Audio Production for TV and Film. Norris’ introduction to other people in the industry lead Thompson to sound utility for five years where she worked on other projects including Family Feud, Hunger Games, Necessary Roughness starring Scott Cohen and Callie Thorne and Drop Dead Diva starring Brooke Elliott.

“I have few other mentors in Atlanta that work on major movies and TV shows that use Lectro as well, so why wouldn’t I,” states Thompson. “Producers are used to seeing Lectrosonics. When they glance at your cart, they want to see Lectro because then they know their gear works best on dialogue in the field.”

After joining IATSE in 2011, Thompson launched her own company Audacity Production House in 2013 and then joined IBEW and Nabet in 2015. She started a new company, Sound Speeds in 2019, to support the location sound mixer.

“I was dedicated to becoming a sound mixer and I knew I was ready to work for myself. That’s when Audacity was born. So I created Sound Speeds, which is a group of talented diverse sound mixers. We are proud to say we use Lectrosonics on all shoots. I want to be in a position to help others with their career, the same way I’ve been helped. I always find talented mixers if I’m not available for a job.”

Most recently, Thompson worked on various projects in preparation for the Super Bowl Super Bowl including the EA sports bowl, team interviews, celebrity documentaries and Docuseries around the city.

“My favorite Lectrosonics gear includes the SRC and SMV transmitters and the SPDR recorder. We work with lots of talent; at times their wardrobe is difficult. I depend on Lector’s compact transmitters for concealing the mic and pack. Lectro makes it easier for us to wire people with difficult/form fitting clothes which makes it easier to hide on the talent.

“I also like the PDR. If talent goes out of range of the antennas it’s ok, it still records. Whenever I do a car scene, I use the PDR a lot and I love it!”

Thompson and Sound Speeds Production House have more films on the docket this summer and Thompson is excited for what Atlanta and other destinations have to offer.

“Sound Speeds loves Lectrosonics and we are proud to let the world know we use them exclusively.

Sound Speeds was founded a decade ago by location sound mixer Chykeria Thompson, whose extensive credits include Around the Way, Atlanta Eats, Hunger Games, Lila & Eve, Walking Dead, and commercial work for clients such as Adidas, Apple, Coca-Cola, Home Depot, Hyundai, Lexus, Nike, Nikon, Porsche and Spanx. For more information about Sound Speeds and to find the ideal sound mixer for your next project, visit www.soundspeeds.com.