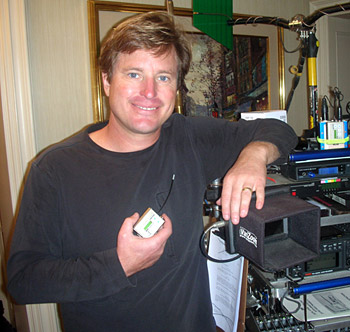 Rio Rancho, NM – November 2006… Bobby, the highly anticipated MGM/Weinstein Company film debuting November 17th in time for the crucial Holiday film period, chronicles the events of the June 6th, 1968 assassination of U.S. Senator Robert F. Kennedy at The Ambassador Hotel in Los Angeles. Written and directed by Emilio Estevez and featuring a star-studded cast that includes Martin Sheen, Helen Hunt, Anthony Hopkins, William H. Macy, and others, Bobby was quite a challenge in terms of capturing its production sound—and that challenge was met and exceeded by veteran production sound mixer Coleman Metts using a Venue wireless system from Lectrosonics.

Metts, whose credits include the films Donnie Darko and Dancing at the Blue Iguana, was charged with the task of recording production sound for Bobby. While capturing clean, uncluttered dialog free from the ambient environmental noises is never easy, the challenge compounds itself when there is excessive body contact, such as that incurred during a drug-induced brawl that occurs during a tennis court mishap in the film—as Metts explained.

“There’s a scene where Helen Hunt and Martin Sheen are dressed in their tennis whites—playing tennis—and their game is interrupted by stray balls wandering into their court,” noted Metts. “Clearly annoyed by this intrusion, the focus shifts to an adjacent court, where two guys in business suits (played by Brian Geraghty and Shia LaBeouf) are high on drugs, goofing around, and being generally obnoxious. This leads to one of the men collapsing over the net while fumbling for the ball and, in short order, the two are falling over one another, laughing, and being extremely rude.”

Metts reports this scene was captured late in the day, the cast and crew were rapidly losing daylight, and a school across the street was just letting out—so there was an abundance of peripheral noise. “Recognizing we were likely to get only one take,” said Metts, “the DP (Director of Photography) decided to place one camera up high on a 15-foot step ladder and the other one at ground level on a dolly while I wired the actors up and placed the transmitters in their pants pockets—it was time to go.”

“Throughout this scene,” acknowledges Metts, “I was not only concerned about the quality of audio I might get, I was extremely anxious about the ability of my transmitters to endure this. All four actors were speaking at once and there was all this commotion—not to mention the noise from the nearby school. When the scene was over, I checked my recording and the sound quality was great. When I went to see what condition my transmitters were in, the actors told me they had forgotten they were even wearing them. Much to my surprise, the transmitters held up really well, with just a few minor scratches. My Lectrosonics gear performed beyond all expectations.”

Metts attributes the success of this project to the diminutive size of his SM Series Super-Miniature Digital Hybrid Wireless™ transmitters. “The small size of the transmitter is something everyone comments on,” says Metts. “It is a tremendous help in hiding the unit from the camera, enabling us to put a transmitter on the talent in ways that, previously, wardrobe would never have allowed.”

Metts’ Venue Modular Receiver System is fully stocked with six VRT receiver modules, which have identical audio performance characteristics to the standard VRS modules, but carry the added benefit of an auto-tuning front-end RF filter scheme. After countless projects in the trenches, Metts reports solid performance from his Lectrosonics gear and equally capable support from the company. “The range and sound quality of this system is excellent,” said Metts. “Lectrosonics always goes the extra mile. When I’ve needed support, it’s been easy to get someone on the phone. The company is very responsive. All in all, my Lectrosonics gear has performed beyond all expectations”

For additional information about Coleman Metts, visit him online at www.colemanmetts.com. 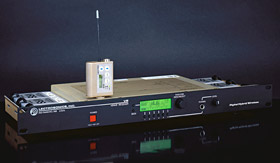 About the Lectrosonics Venue Wireless System and SM Series Super-Miniature Transmitter
The Venue Receievr system is a modular UHF design that operates with Digital Hybrid Wireless™ transmitters, and a variety of analog transmitters. It consists of a Venue Receiver Master (VRM) and one to six plug-in receiver modules. The SM Series transmitter family brings Digital Hybrid Wireless™ technology to miniature transmitters in several different configurations for essentially any wireless microphone application with a lavalier microphone. The tiny size of the single battery SM model makes concealment easy, yet with a full 100 mW output, it does not sacrifice performance.