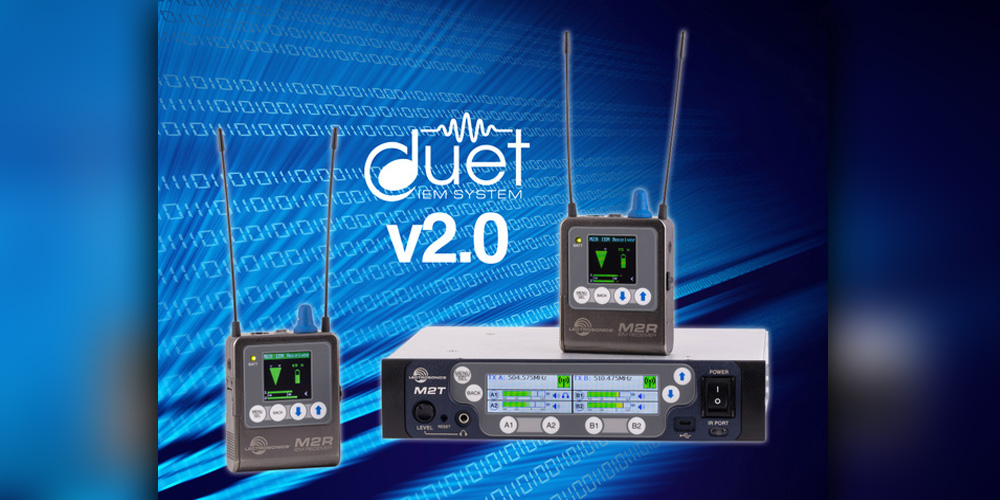 V2.0 Update Includes a Host of New Features as a Result of Valuable Customer Input

Rio Rancho, NM (November 27, 2018) — Lectrosonics is pleased to announce a major firmware update for their acclaimed Duet digital wireless monitor IEM/IFB system, V2.0. The 2.0 Firmware update includes a host of new features and improvements that are the result of valuable customer input, including improved audio quality, shortcuts on the front panel to assist in quick setup, a volume lock and additional flexibility in setting the audio gain and limiter functions. With the new update, users can now do a front panel IR sync operation and similarly turn on or off the RF transmission without requiring access to the menus.

Added flexibility to the M2R receiver audio setup now includes an option for negative gain on the limiter screen, allowing adjustment to the maximum gain available, for instances where artists may be using extra sensitive earphones. The limiter screen now also features a meter showing the amount of gain reduction acting on the signal. Additionally, there is now also a “threshold off” setting, which allows users to bypass the limiter altogether for a more dynamic audio response.

The M2R receiver now lets users turn the LEDs on or off, by pressing the “up” or “down” arrow buttons on the pack, for cases where users might want to minimize the visual impact while worn on talent. And, since many users are employing the Duet system as an IFB solution for broadcast facilities, mono earphones may be used with the receiver. Thus, a stereo/mono earphone selection is available in the menu.

“The Duet system has been an incredibly successful product for us in the past year since its introduction,” says Karl Winkler, VP of Sales and Service at Lectrosonics. “We’ve enjoyed learning about the variety of ways that this equipment is being used, from churches to tours to TV studios. All the user input during that time has been invaluable in terms of improving the product and adding these new features.”

The Duet system consists of the M2T dual-stereo half-rack transmitter and M2R diversity belt pack receiver. The Duet covers the UHF frequencies of 470-608 MHz in a single range, uses digital modulation for transmission, and can accept analog or Dante digital inputs. The new system is designed and developed with professional touring, installation, theater, filmmaking and broadcast customers in mind.

The Duet firmware V2.0 is available for download from the Lectrosonics web site. Lectrosonics Wireless Designer software is required to perform the update. Once the update had been performed, Wireless Designer must also be updated to V1.3.13 or higher to communicate with the M2T. (Please also note that V2.0 must be installed on both M2T transmitters and M2R receivers, as the new version is not compatible with any 1.X versions.)