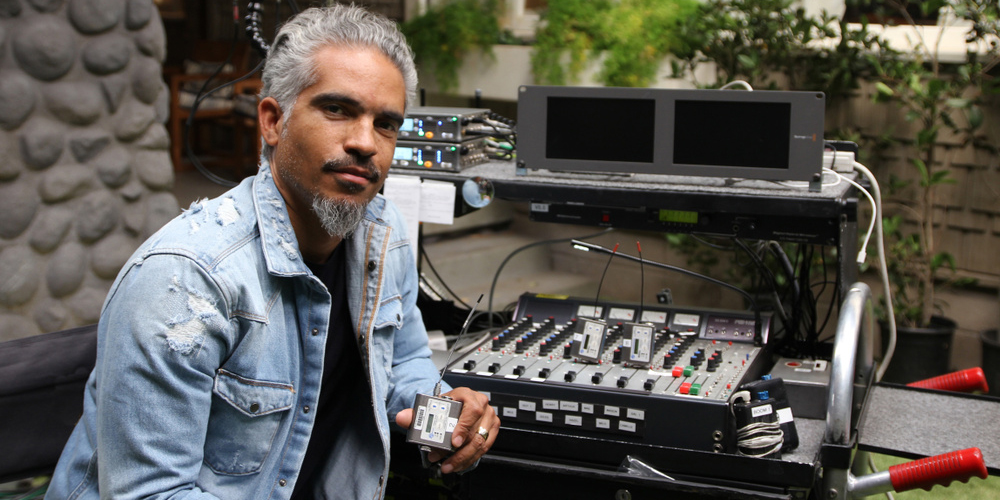 “On the set, Warner Brothers offers me all brands of gear but I choose Lectro. And I have friends mixing for other productions on the Warner lot as well. And all the sound engineers there I know are all using Lectro too.”

Burbank, CA (October 23, 2018) – Los Angeles-based Bryan Sol Aponte has worked as a sound mixer since 2000, working for major networks such as BET, ABC, E! Network and CBS. Over the years some of his credits have grown to include Me, Myself and I, MADtv, Workaholics, The Voice, Lopez Tonight, The BET Honors, American Gangster, and E! True Hollywood Story. In his newest ABC produced comedy TV series, Splitting Up Together, Aponte uses Lectrosonics SM Series transmitters, Wireless HMs, and IFBT4 IFB transmitters with 14 IFBR1a receiver packs as well as a Venue Receiver.

Filmed on the Warner Brothers lot, season two of Splitting Up Together stars Jenna Fischer and Oliver Hudson and chronicles a couple’s relationship suddenly reignited by their divorce. “On the set, Warner Brothers offers me all brands of gear but I choose Lectro,” says Aponte who started his career after graduating from the Institute of Audio Research in Sound Engineering and Long Island University in Media Arts. “And I have friends mixing for other productions on the Warner lot as well. And all the sound engineers I know there are all using Lectro too.”

In 2004, Aponte received two Emmy nominations for his work on the television series The Young and the Restless, where he did post-production sound for over 540 episodes. Throughout his career as sound engineer and producer, Aponte has relied on Lectrosonics.

From his experience on other productions in the past, Aponte knows frequencies can sometimes be a challenge. “Outside of the Warner Brothers lot when I’m shooting on location, one of my challenges is the RF signal, so I use Wireless Designer from Lectrosonics and it’s amazing. The software connects to my Venue Receiver and helps me coordinate frequencies quickly. It’s easy to use and it’s a quick fix.”

In 2010, Aponte founded Full Frequency Media, a full-service production company specializing in the creation, development, packaging, and distribution of media content across all platforms. Aponte recently produced the award winning short film ’90 DAYS’, starring Teyonah Parris and Pauletta Washington and ‘Beyond the Talent’, a celebrity interview series streaming on Amazon Prime. Aponte was also an associate producer for ‘Skin in the Game’ a feature film directed by Adisa, starring Erica Ash, which premiered at Urban World Festival in New York.

Aponte plans on adding more Lectrosonics equipment to his arsenal, including the SRCs because of their small size and light weight.

“I like Lectro because they’re the best in the business. I’ve tried other brands and I don’t like their interfaces, they’re not user-friendly like Lectro. Lectrosonics is reliable and their equipment lasts a long time.”

Full Frequency Media is a full service production company specializing in the creation, development, packaging and distribution of media content across all platforms. Our outside the box approach has allowed us to successfully produce programming that can currently be viewed around the world. For more information, visit: www.fullfrequencymedia.com.