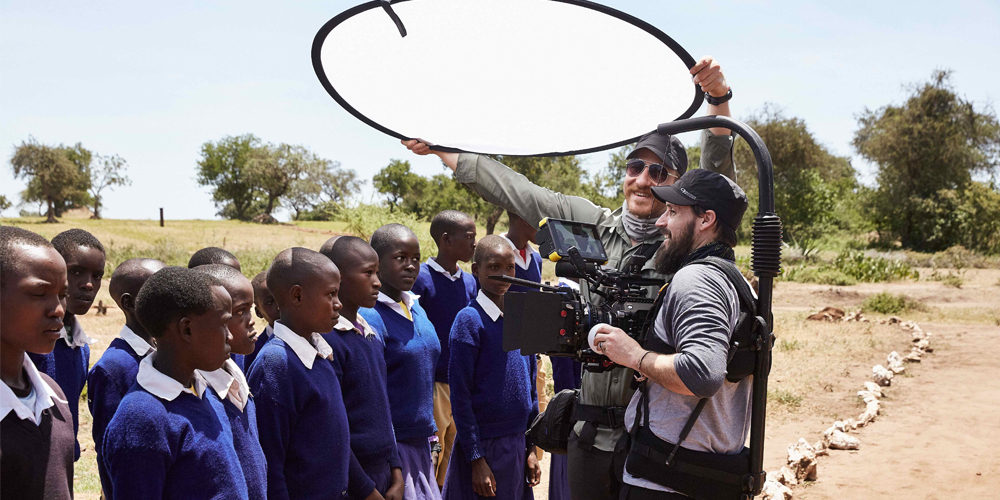 “We chose Lectrosonics because of the durability of the units. We’re always going, going, going, and jumping out of cars and off mountains. Their equipment is built like a tank and for the type of filming we do, that’s exactly what we need.”

Louisville, KY (July 31, 2018) – Global film company, Nadus Films, works with socially responsible companies and nonprofit mission-driven organizations to film scripted and non-scripted work, ranging from promotional material and short film to feature films and TV Series. To capture the authentic and unique voice in each of their films, Nadus makes use of Lectrosonics Digital Hybrid Wireless Technology, including LT Series Transmitters and LR Receivers, which they use with the LectroRM App and LT Battery Eliminator.

Founded in 2005 by Coury Deeb, Nadus Films represents Sudan spelled backwards. The film company began after the founder heard a lecture by Dr. Celestin Musekura, speaking about his work in southern Sudan, reconciling tribes and governments. Inspired, Deeb approached Musekura at the conclusion of his talk and offered to tell his story through film.

“Now more than ever we’re inundated with what is needed globally because of social media. It struck me after listening to Musekura that I knew what I needed to do socially, use what I’m good at to serve others. At that time, I was a still photographer but I told him I’d film free of charge, so I raised my own money and that’s how it started. A few weeks later I was puddle jumping in Sudan and I’ve been back 7 times since.”

Nadus Films has an impressive portfolio of films including Waterboys, working with Doug Pitt and Chris Long of the Philadelphia Eagles, documenting their mission to bring clean water to one million people in East African countries. The company also collaborates with the Jennifer Lawrence Foundation, whose mission is to bring needed resources to charitable organizations working with children and the arts. Another notable work by Nadus is the Emmy nominated TV Series Us Against the World with Comcast and NBC, which follows racial tensions of a rural town in Kentucky as a black coach turns a losing group of basketball kids into a winning team.

“We’ve traveled the world several times filming in India, Bangladesh, Tanzania, Kenya, Uganda, Ethiopia, Guatemala, and Iraq,” Deeb says. “When we film we don’t want a target on our back, particularly in certain countries, so we try to be as efficient as possible with equipment and time, and for safety reasons we’re there no longer than 4 to 5 days.”

For efficiency, Nadus Film uses the Lectrosonics LT Battery Eliminator. “When we build our rigs, we include the Lectro battery eliminator so we don’t have to juggle AA batteries along with all our other equipment,” says Drew Layman, second cameraman and assistant editor of Nadus Films.

In Iraq, Nadus Films worked with ShaiFund, a non-profit organization that provides humanitarian assistance and disaster relief, to tell the story of the first family to return to the city of Qaraqosh two years after seventy thousand people fled overnight from ISIS.

“We used the Lectro App in Iraq, which was incredibly helpful. After the transmitters are carefully placed on people, I was able to adjust the settings wirelessly through the app,” says Layman. “If we’re interviewing someone in one location and we need to jump in a car and take them to another location I can put the unit to sleep so the battery doesn’t run down. I can also turn it back on without having to take it off the person we’re filming and redo everything. It saves us time, which is what we need in a lot of the areas we film.”

Along with the Lectro App Layman says Nadus relies on the L-Series quite frequently.
“We chose Lectrosonics because of the durability of the units. We’re always going, going, going, and jumping out of cars and off mountains. We put our equipment to the test and we need something that will last. Their equipment is built like a tank and for the type of filming we do, that’s exactly what we need. The antennas on the L-Series are detachable, which is great because it means it’s less likely to break, which we need when we’re in some of these countries. It’s peace of mind knowing the equipment isn’t going to go down while we’re there.”

Upcoming film projects include Wake, which takes people on extreme transformative journeys to bring them to their life purpose, as well as Embedded, in which retired military personnel conduct black-raid missions to rescue victims of human trafficking.

Nadus Films is creating work with global impact and not only did they choose Lectrosonics because of the durability to make their mission possible, but also because “The quality of the equipment is really clean,” says Layman who hopes to add more Lectrosonics Digital Hybrid Wireless gear to their arsenal in the near future.