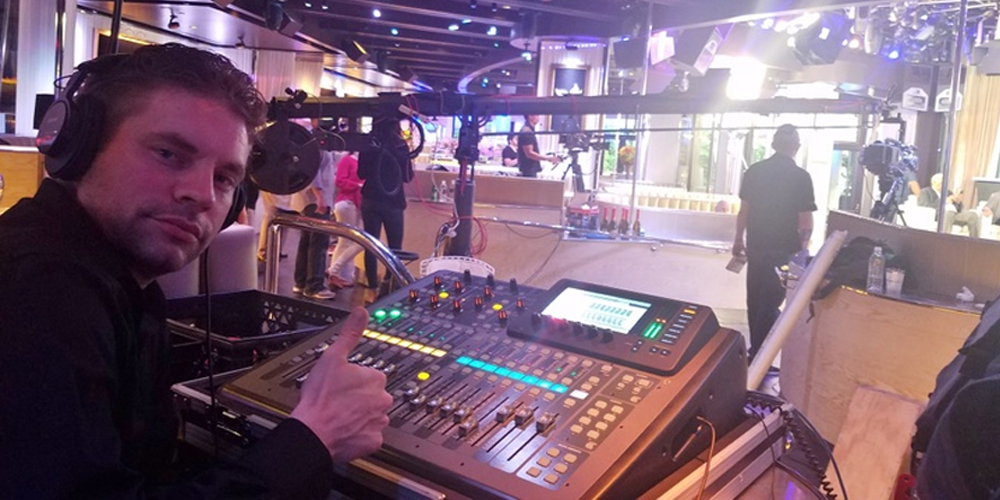 Las Vegas, NV (July 10, 2018) — Working in Las Vegas, independent production sound mixer Neil Curschman of NC-Sound has to be prepared for anything, from interviewing celebrities on the red carpet one day, to profiling a casino show performer the next day and then covering a major event at the convention center the day after that. Whatever the situation there is no margin for error, so Curschman relies on Lectrosonics Digital Hybrid Wireless® equipment to get the job done, including SMQV belt pack transmitters, bagged SR Series receivers and a pair of racked Venue2 receivers.

“There are different types of productions that come into town,” says Curschman, whose client list includes television networks, film companies, ad agencies, fortune 500 companies, celebrities and numerous others. “There are so many challenges, and you can’t mess up. It’s all about your skill set, your professionalism and the way you interact with people, but the equipment is a big part of it, too. It cannot fail; it has to be consistent; it has to be reliable. That’s where Lectrosonics gear has been great for me.”

In contrast to the variety of work that he typically experiences, Curschman reports, eight months of the past year were occupied by seasons one and two of the Food Network’s Vegas Cakes reality show, for which he was the audio supervisor. The show centers on Freed’s Bakery, a Las Vegas institution for almost six decades, and showcases the extravagant custom cakes that the multi-generational family-owned business creates for high-profile clients such as Wayne and Kathleen Newton, Cirque du Soleil’s Ka, Blue Man Group and Donnie and Marie Osmond.

“The main location is the bakery. That’s when I use my Lectrosonics Venue2 receivers,” he says. “I set up antennas at different locations in the bakery to get RF coverage everywhere; mic-up six to eight people with Sanken COS11D lavs, put SMQV transmitters on everybody and let them run wild.” The receivers are racked with a Sound Devices 970 recorder, with all three units networked over Dante.

When Vegas Cakes participants move outside, to deliver a cake to a customer on the Strip, for example, Curschman transitions to a bag system. “I have a field kit with a Sound Devices 664 mixer and Lectrosonics SR receivers, all tuned to the same frequencies that I have on the Venue2 rack system. That way, I don’t have to change freqs when I go from the bakery out into the field,” he says.

Cake deliveries present Curschman with another challenge. “A lot of times we will be delivering a cake to a client at a show on the Las Vegas Strip, so we’re going right into that challenging RF environment. All these shows keep their transmitters on throughout the day and sometimes it’s difficult communicating with the techs, or they aren’t even there yet. There is a lot of RF, but we have to plunge ourselves right into it. Time and time again my Lectrosonics gear has proven itself to overcome the challenges.”

Curschman makes regular use of the Wireless Designer management software, which is bundled with the Venue2, and also uses the LectroRM acoustic remote control smartphone app for his SMQV transmitters. “LectroRM is particularly useful for controlling a transmitter that is not easily accessible, such as under someone’s work clothes”, he says. “Also, sometimes I use it to just turn them off at lunch to save the batteries for an hour.”

In 2003, at age 18, Curschman went straight from high school into working as a production assistant on a reality show. He started getting work as a boom operator: “This was back when there were a lot of two-man sound teams, even on smaller shoots,” he says. In 2008 he went back to school and got a Bachelor of Science in Audio Production. “By the time I graduated in 2011 I hit the ground running and started working pretty much full time as a production sound mixer, doing post production sound on the side.” He has recently also added live sound production services.

Regarding his reliance on Lectrosonics equipment, he says, “When you decide to go all-in on being a production sound mixer, you have to use the best gear. When you start working in the field, getting bigger and bigger jobs, you start working with the gear that the high-level professionals are working with. As a young professional, you’re just trying to learn how to use the gear that you know you’re going to have to deal with daily—and Lectrosonics gear was something that I came across a lot. The more you work with it, the more you see the advantages of using Lectrosonics. So it’s a wise investment.”

Variety is the spice of life for Curschman. “One day I might be at the Billboard Music Awards doing a red carpet interview. There are hundreds of channels of wireless going and I have to work out how to run two channels, so I can have my host miked-up and also have a wireless handheld with a mic flag. The next day I might be at a Microsoft convention with RF activity everywhere, running around with a miked-up host to the booths and doing interviews. The next day, I’m doing a sit-down interview with Celine Dion. I’ve very lucky to have the opportunity to work with so many different great clients. It gives me and my Lectrosonics gear the opportunity to do a little bit of everything.”