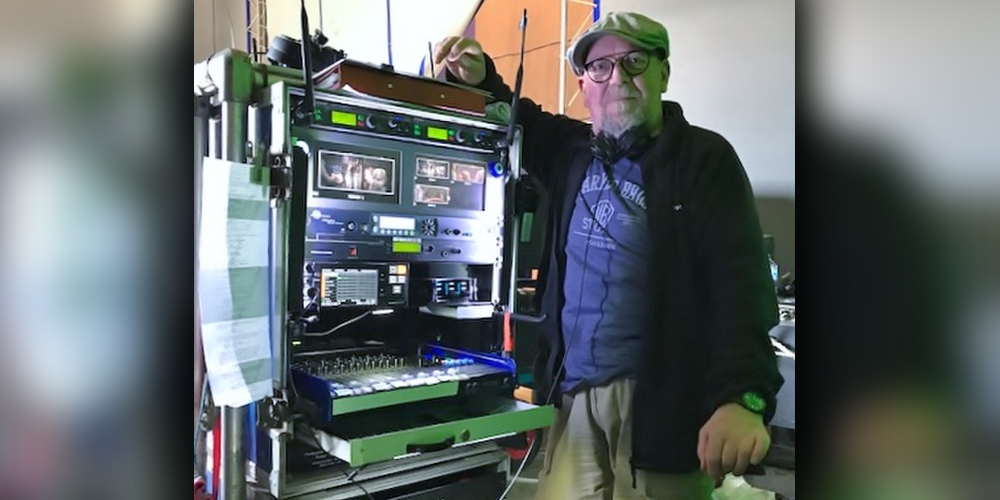 “My Lectrosonics equipment has travelled well and always been reliable. Having the ability to increase the output of the transmitters has helped on several occasions.”

Worcester, UK (May 8, 2018) — UK-based Colin Nicolson has worked as a production sound mixer and recordist since the eighties, first in television and documentaries then increasingly in motion pictures, over recent years racking up credits including Murder on the Orient Express, T2 Trainspotting and The Theory of Everything. In 2013 he began to invest in Lectrosonics Digital Hybrid Wireless® equipment, initially for Edgar Wright’s The World’s End including HM plug-on and SMV belt pack transmitters and SR dual channel and Venue receivers. And he has been steadily expanding his Lectro inventory ever since, most recently adding SSM micro belt pack transmitters.

Nicolson purchased a pair of SSM micro belt pack transmitters for his current production, Walt Disney Pictures’ Artemis Fowl, which started principal photography in March and is scheduled to shoot in England, Northern Ireland and Ho Chi Minh City. The film, directed by Kenneth Branagh, stars Judi Dench, Josh Gad and a newcomer, Ferdia Shaw, in the lead role. It is based on the young adult fantasy novel by Irish author Eoin Colfer, featuring the battles of 12-year-old genius Artemis Fowl II against a powerful, hidden race of fairies who may be behind his father’s disappearance, is set for release in August 2019.

According to Nicolson, his initial two SSM transmitters had proved very useful when used with some of the tightly tailored costumes that he encountered on recent productions. For example, he says, “The SSM transmitter was useful for hiding on Alicia Vikander when I mixed the UK part of Tomb Raider. So much so that I bought another two for my current production, Artemis Fowl.”

Nicolson made his first major investment in Lectrosonics equipment for The World’s End, starring Simon Pegg, Nick Frost and Martin Freeman and directed by Edgar Wright. “Because The World’s End was fast, comedic dialogue with at least five principals, the on-set sound had to be the 'final' recording, as Edgar didn’t want to have to use ADR for such fine-tuned performances,” he explains. “I decided to upgrade my wireless and Lectrosonics was the obvious choice because of their great reputation in the industry.”

For that initial Lectrosonics purchase, he says, “I chose the Venue receiver, two SR Series receivers and eight SMV transmitters: Venue because its 19-inch rack mounting fit comfortably on my cart and the SMVs because of their size. The SR Series receivers could be used with my Sound Devices 633 when we had to go 'portable,' but could also be used as extra channels on my cart,” he says.

Nicolson soon had several opportunities to test the reliability of Lectrosonics under adverse conditions. “The next major feature I used Lectrosonics transmitters and receivers on was Victor Frankenstein, where their reliability on a very wet set for the castle scenes at the end was seriously tested—and well passed. A great demonstration, if one was needed, of the build quality,” he says.

“The same was true when I mixed on Sacha Baron Cohen’s The Brothers Grimsby. The transmitters were submerged in a sinking car and subjected to elephant 'nastiness' in the womb!” he says.

Having already added two HM transmitters for use on booms and placement mics, Nicolson continues, his next production sound project, Murder on the Orient Express, featured a very large cast—including Kenneth Branagh, Tom Bateman, Penélope Cruz, Willem Dafoe, Judi Dench, Johnny Depp, Josh Gad, Derek Jacobi and numerous others—that placed even greater demands on his location sound kit. “I had to increase my channel count. I invested in a Venue 2 receiver and more SMB transmitters, another HMa and two SSMs.”

Typically, he adds, “I mix with a Professional Sound Corp. Solice audio mixer and record on a Sound Devices 970, but for this production I invested in a Yamaha QL1 mixer. I took advantage of the higher track count of the 970 using the Dante digital audio protocol.”

Before Nicolson reunited with Branagh for the current Artemis Fowl production, he acquired a third SR Series dual-channel receiver, which also came in handy on his most recent shoot. “A third SR allows six channels in portable mode, which came in very useful on The Kid Who Would Be King, which is being released the beginning of 2019, when we filmed at several locations with very difficult access,” he says.

Nicolson has filmed in countries in Europe and the Far East, including in some difficult locations, but the Lectrosonics gear has always been up to the task, he reports. “My Lectrosonics equipment has travelled well and always been reliable. So far, apart from Rome, which has an infamous RF problem, I’ve not had any RF issues. But having the ability to increase the output of the transmitters has helped on several occasions.”