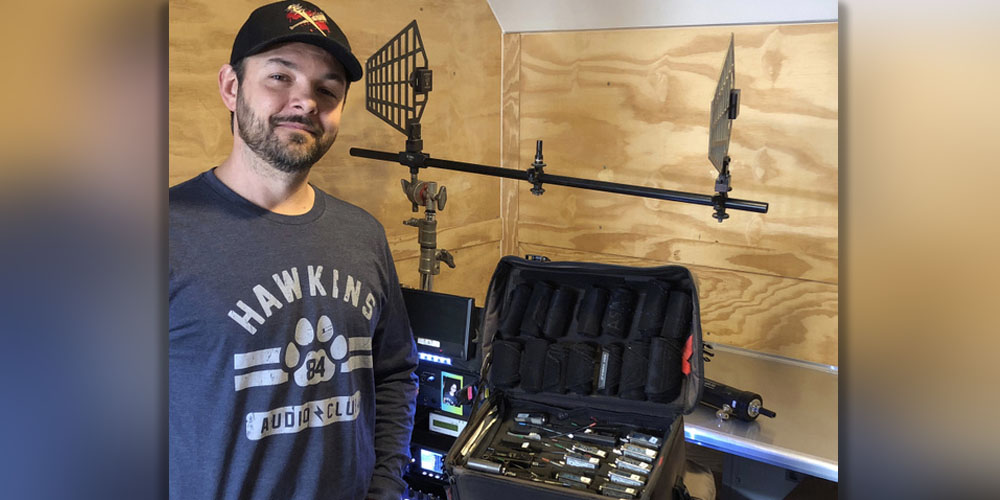 “I’ve kept all my Lectro equipment, and it’s been great, because I’ve been able to make multiple packages all using the same gear. I’m able to jump from one to the next without having to change transmitters or frequencies or blocks. That’s a huge advantage, especially in the fast-paced world of television.”

Stranger Things may be set in Indiana, but it’s actually filmed in Georgia. Clark, an 18-year veteran of production sound who is based in the Atlanta area, previously worked on the pilot and first season of Halt and Catch Fire — where Georgia locations stood in for Texas — and has so far racked up more than 85 episodes of The Walking Dead, both for AMC. He started his career on Good Eats, working on 185 episodes of the Food Network show beginning in January 2001.

There is quite a contrast between The Walking Dead and Stranger Things, as Clark explains. “The Walking Dead production is gigantic; we’ve got 20 main characters and when they all get together it’s quite a big day for us. On Stranger Things, however, there were only a couple of scenes in season two where we had the entire ensemble of heroes in the house. That was a heavy wireless day, as expected, because there were

so many people all over the place in a confined area. I topped out at eight actors, all on set at once, with dialog.”

Stranger Things is a two-camera show, but treated largely as a single-camera show with setups with wide and tights, he reports, which enables the team to use booms outfitted with Lectrosonics SMQV transmitters. On scenes where the director shoots wide shots and he must wire the actors for RF, Clark can select from his collection of Lectrosonics beltpack transmitters, including two SSM, 10 SMV and seven UM400a models, paired with DPA Microphones 4060, 4061 or 4071 elements. The choice of equipment “depends on the actors, the wardrobe, volume and where we have to place the mic,” he says.

“One of my mentors was a diehard Lectrosonics fan who got started on 185, 190 and 195 transmitters and had been in the business for 20 years before I met him,” says Clark. “So I was very accustomed to Lectros and how they worked and when I started to buy my own gear that was what I chose. They always worked, and they were durable.”

As Clark expanded his arsenal of Lectrosonics gear over the years, graduating from bags to carts, he says, “I’ve kept all my Lectro equipment, and it’s been great, because I’ve been able to make multiple packages all using the same gear. I’m able to jump from one to the next without having to change transmitters or frequencies or blocks. That’s a huge advantage, especially in the fast-paced world of television.”

On Stranger Things, much of which was shot indoors or on a stage, he planted mics around the set to supplement the booms whenever possible. “We use plants as much as we can. We don’t like to use wires on the actors if we don’t have to. Plus, we want to give post production those options. It’s great because I have all those channels available to me, so I can really plant out if I need to,” says Clark, who mixes to a 12-track recorder.

Plus, he says, “We’re always using plant mics in car rigs. We typically use the SMQV boom transmitters, so we can get a little extra out of that big metal box.”

While Clark has heard horror stories about wireless problems from other production sound mixers, he has had a largely trouble-free experience, he says. Even when he started out, he says, using a basic system, the performance of his Lectrosonics equipment was always reliable. On Good Eats, he used four UCR411a compact receivers, he recalls. “I would put them in a little box and run them off to the set, because I didn’t have shark fins or an antenna distribution system yet. I had to run four XLR cables out there to get the best signal. I was still building and acquiring and doing the best with what I had. Which was great with Lectrosonics, because just with the whip antennas they still perform amazingly well.”

He comments, “I’ve always had great luck with Lectrosonics. We get great performance just using two shark fin antennas and the Venue receiver, and. I power two ALP650 antennas straight out to the set. Sometimes I’m far from the set; I’m usually the last technical department in line when we shoot on roads and out in the woods and on location. I have to be on set and no one really wants us there. So having that range is crucial. And I very rarely get any dropouts.”