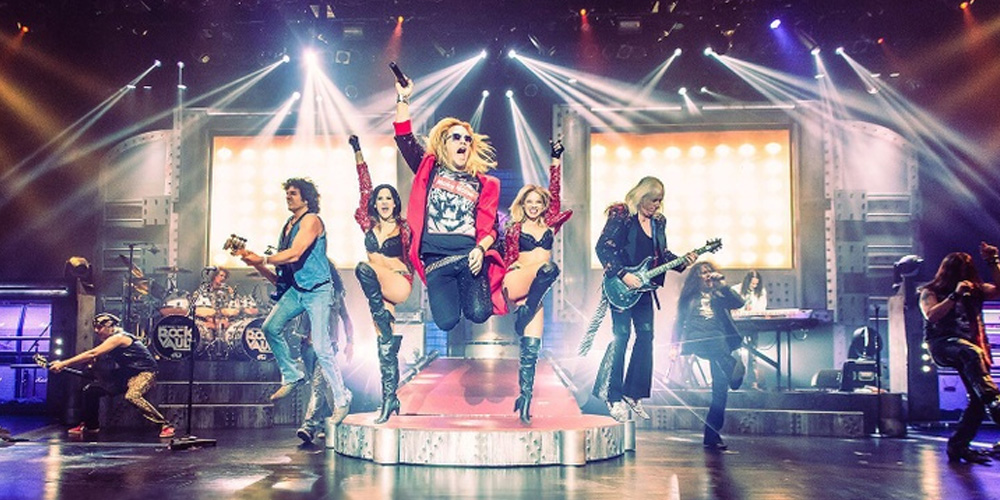 “We have 20 or more wireless frequencies open at any given moment, and none of the Lectrosonics gear has ever had a problem with dropouts, noise, or crosstalk. None of the handhelds, guitar or bass rigs — they all perform great.”

Las Vegas, NV (February 13, 2018) The Raiding the Rock Vault show is a tribute to the classic and heavy rock of the 1960s through the ’80s, featuring classic songs from famous artists like The Rolling Stones, The Who, The Doors, Jimi Hendrix, Led Zeppelin, Deep Purple, Free, Eagles, Fleetwood Mac, Queen, Boston, Aerosmith, Van Halen, AC/DC, Pat Benatar, Foreigner, Heart, Journey, Bon Jovi, Whitesnake, and many more. Iconic songs are performed by a rotating cast of musicians from many of those bands, headlined by Heart guitarist and Rock and Roll Hall of Famer Howard Leese. To make sure the always-packed house at the Hard Rock Hotel hears every member of this dream team loud and clear, production manager Rob Valenti relies almost exclusively on Lectrosonics digital hybrid wireless audio systems, including LT bodypack transmitters, LR receivers, Venue 2 modular receivers, and HHa handheld microphones.

Valenti, a road veteran who has managed tours for the Jason Derulo, Goo Goo Dolls and Adam Lambert, had heard of Lectrosonics during his tenure with the latter. “I first learned about them from Gary Stokes, who was our monitor engineer with Adam Lambert,” he recalls. “Gary was a huge fan of Lectro and we were trying to put together some travel gear. We were doing lots of promos and one-offs and previously always had problems getting constant wireless on the road.” Gary turned me on to Lectrosonics, so I knew about them when I came to Raiding the Rock Vault.”

There are two main applications for wireless in the Rock Vault show: connecting electric guitar and bass with amps or pedalboards on the constantly danced-upon and therefore cable-unfriendly stage, and bringing direct signals from mics, acoustic guitars, and bass to the mixing console. Given the sheer number of channels required, Valenti has found Lectrosonics’ ability for any transmitter-receiver pair to find exactly the clearest frequency — then tenaciously hold onto it amidst all the other RF activity — to be invaluable in ensuring every performance goes off without a hitch. Valenti details which setups he uses where:

“As we have two guitar players at any time, we run wireless on both sides of the stage,” Valenti explains. “At stage left, Howard Leese typically uses four guitars for the show, and we have two belt packs we swap between those guitars as necessary.” The LT belt packs worn by guitarists are half of the IS400-compact systems, which pair with LR receivers parked in tech worlds' stage left and right. With a frequency response of 32Hz to 20kHz, the system is capable of reproducing tones from the low B of a five-string bass to the highest harmonics a shredding lead guitarist can dish out.

“At stage right, we have two Gibson double-neck guitars, and depending on who’s playing we may have an additional three to six guitars,” Valenti continues. “There’s an acoustic guitar there for [vocalist] Andrew Freeman as well. Another acoustic channel is at stage left for [vocalist] Paul Shortino. Acoustic guitars are on LT belt pack transmitters and work with the Venue2 receivers; electric guitars are mic’d at their cabinets.”

“Then we have six handheld HHa mics transmitting to receivers at the console,” Valenti says, referring to the Venue 2 frames, which also receive acoustic guitar and bass DIs, and can be outfitted with up to six channels in a single rack space via flexible VRT2 receiver modules.

“In total there’s something like two electric guitar channels each at stage left and right, an acoustic channel on each side, a bass channel, and the mics,” Valenti sums up. “Ten people perform on any given night. The point is, we have 20 or more wireless frequencies open at any given moment, and none of the Lectrosonics gear has ever had a problem with dropouts, noise, or crosstalk. None of the handhelds, guitar or bass rigs — they all perform great.”

All of the frequency management on Raiding the Rock Vault is handled using Lectrosonics Wireless Designer software.

Part of a great performance is audio quality, and for classic rock and heavy metal musicians, that comes down to the all-important tone of their instrument and amp. Valenti notes that Lectrosonics delivered in this arena as well: “We swap through maybe ten guitarists and five bassists — Hugh McDonald of Bon Jovi and of course Phil Soussan — depending on who’s on tour elsewhere. All these guys are highly conscious of tone and how cables affect it, and they typically don’t trust wireless. If they use it at all, they’re very picky about what they use. From the beginning, I have never heard a complaint from a single one of them about tone, expressiveness, or the immediacy between their instrument and their amp.”

“We’re coming up on our one-year anniversary of using Lectro for the whole show,” he concludes. “Hopefully, Raiding the Rock Vault will be what I’m doing for quite a while, but whatever I do in the future, I hope to bring in Lectrosonics and give it a good run!”

To learn more about Raiding the Rock Vault, visit www.raidingtherockvault.com.