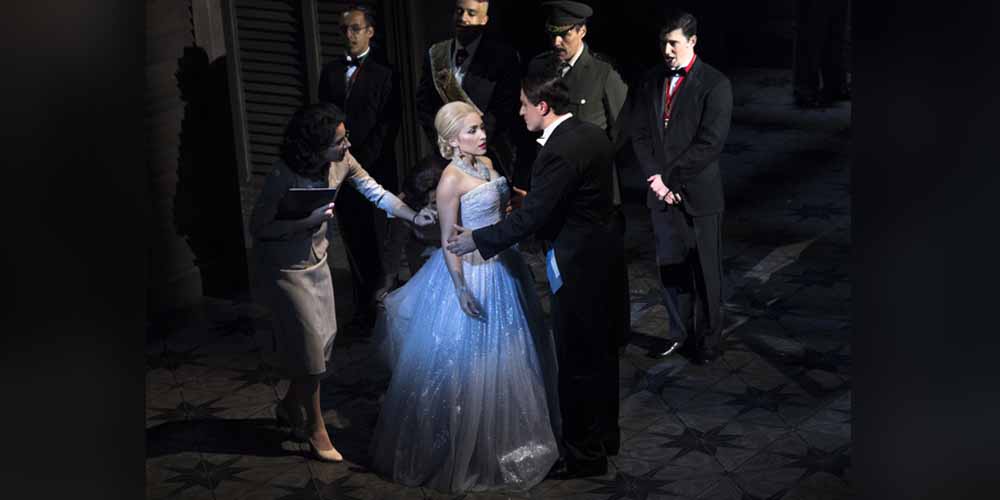 “The Lectrosonics SSMs are an ideal size for putting in wigs. If we have a principal that needs to be double-miked then we’re not taking up that much real estate on the actor’s body with them.”

Sarasota, FL (January 30, 2018) —The Asolo Repertory Theatre, the largest Equity theatre in Florida and the largest repertory theatre in the southeastern United States, increased its inventory of Lectrosonics Digital Hybrid Wireless equipment in time for the opening of its new season in mid-November 2017. The company, which primarily performs at the historic Harold E. and Esther M. Mertz Theatre in the Florida State University (FSU) Center for the Performing Arts in Sarasota, expanded its complement of Lectrosonics SSM micro beltpack transmitters and Venue2 receivers to 24 channels.

Asolo Rep’s Equity company, which attracts 100,000 patrons annually, performs a rotating repertory of plays, from classics to contemporary, from November to June. The company’s 2017-2018 season opened in spectacular fashion with an epic production of Tim Rice and Andrew Lloyd Webber’s award-winning musical Evita, directed and choreographed by Josh Rhodes. The pop-rock musical features a cast of 29 actors plus 13 musicians. It stars Puerto Rican singer, actress and dancer Ana Isabelle as Argentina’s First Lady, Eva Perón, who rose from poverty to become known as the “spiritual leader of the nation” before her untimely passing in 1952.

Matthew Parker, resident sound designer at Asolo Repertory Theatre since 1993, reports that the company’s Lectrosonics inventory has been bolstered in anticipation of the imminent loss of access to the 600 MHz band spectrum. Lectrosonics’ A1 block covers 470.100 to 537.575 MHz

“We’ve got 12 channels of Lectrosonics in the A1 block and 12 in the B1 block,” says Parker. “We just added 18 SSMs and we added six last year, so we now have a total of 24 channels.” Pascal Danon, director of the pro audio division’s operations at Focused Technology in Sarasota, supplied the Lectrosonics equipment.

“We use Countryman B6 microphone elements with a flat protective cap which are fully padded to optimize the gain structure through the Lectrosonics system,” Parker adds. He reports that the combination is working well on the rock-opera production of Evita, which features non-stop singing with no dialogue and utilizes a total of 28 channels of RF mics.

“The SSMs are an ideal size for putting in wigs,” Parker continues. “If we have a principal that needs to be double-miked then we’re not taking up that much real estate on the actor’s body with them.”

The wireless environment at the theatre is challenging, with the closest TV transmitter just 10 miles from the theatre, but the Lectrosonics equipment is reportedly equal to the task. “We’ve got wireless mics in the lobby for panel discussions and other events, so that’s another thing in the mix. So we’ve been dealing with the congestion, plus I’ve got a big I-beam underneath the stage. We just changed the IQ tracking filters on the Venue receivers to ‘narrow’ from ‘normal’ and that totally cleaned up the noise,” reports Parker, who has developed a new frequency coordination plan for the coming year.

In addition to Evita and Shakespeare In Love, which is based on the screenplay by Marc Norman and Tom Stoppard and adapted for the stage by Lee Hall, this season’s repertory includes The Morning After Grace, by Carey Crim; Rhinoceros, by Eugene Ionesco; Roe, by Lisa Loomer; and Ragtime, with book by Terrence McNally, music by Stephen Flaherty and lyrics by Lynn Ahren.

The Asolo Rep traces its origin back to 1960 at FSU when the company first performed in an 18th century theatre acquired by the John and Mable Ringling Museum of Art for its collection and transported from Asolo, Italy. In 1989, the company outgrew the theatre and moved to the

500-seat former Dunfermline Opera House, originally built in 1903 in Scotland and relocated to the FSU Center for the Performing Arts and renamed the Mertz Theatre in honor of its benefactors, Harold E. and Esther M. Mertz.