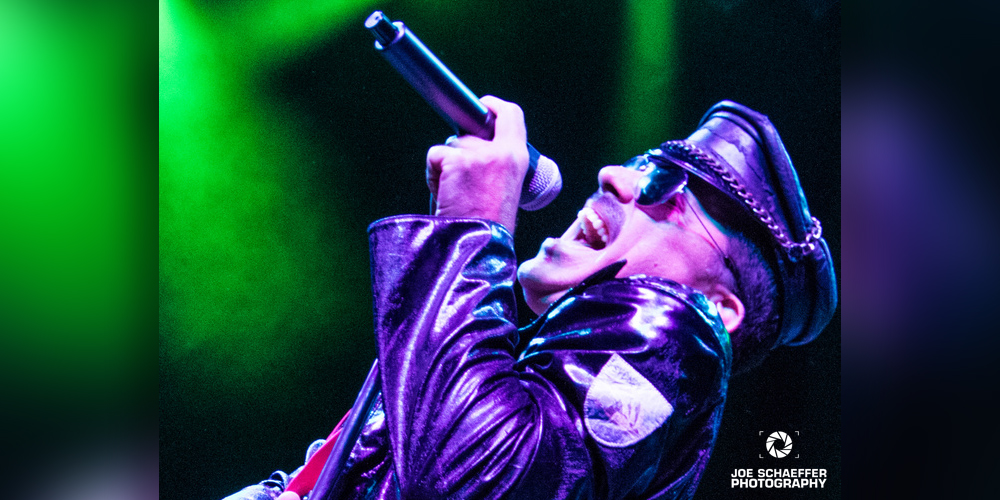 “I sing very loud. I can just blast the diaphragm of a mic to the point where the engineer almost can’t take enough gain out. But the HHa stands up to that better than any mic I’ve ever tried”

Los Angeles, CA (January 3, 2018) ― They sound like Queen. They look like Queen. They will, they will rock you like Queen. Lead singer Greg Finsley simply becomes Freddie Mercury in Queen Nation, the world’s longest-running and most popular Queen tribute band. When he auditioned the Lectrosonics HHa wireless microphone and companion LR receiver, as far as he was concerned every other wireless system … bit the dust.

“Lectrosonics was introduced to me by a very hospitable gentleman, Kelly Fair, who had seen us at a show in Redondo Beach,” recalls Finsley about meeting Lectrosonics’ Western Regional Sales Manager. “He noticed our tour schedule, and that we do concerts in every size venue from country clubs to large arenas. He asked, ‘Hey how’s your mic situation up there? Do you carry your own?’ At the time, I didn’t carry my own. Then he showed me the LR receiver module. He turned the thing on — we were in some random place like a restaurant — and I see the little line going across the screen to find the best frequency. Boom! Then he showed me how to pair it with the HHa mic, which has everything on its little menu — gain and all this other stuff. It was really helpful.”

Finsley, who previously had been using the wireless version of another brand mic, was in for a revelation. “I tried the HHa on my next gig and it was remarkable,” he says. “I used it for the next three nights in a row in gigs in Arizona. The front-of-house guys couldn’t believe how good the clarity was.

Singing exactly like Freddie Mercury has mostly benefits but a few challenges as well. The benefits hooked Finsley up with Queen Nation in the first place. “I’d actually worked in music instrument retail for 17 years between Dallas and New Orleans. My friend Brian Harris, who ran the guitar department at Brook Mays in Dallas at the time, heard me singing ‘Somebody to Love’ and suggested doing a Queen tribute. We called it Queen for a Day and blew the doors off some places. I guess that’s how Queen Nation heard about me, because they flew me out to California to, at first, be their sub — their lead singer was double-booked touring with another band. My first gig with them was the Napa Valley County Fair in August 2008, and it was a total ‘bromance’ from the start. And it’s been great running ever since.”

But channeling Queen has its challenges: “Here’s the thing. I sing very loud,” explains Finsley. “I can just blast the diaphragm of a mic to the point where the engineer almost can’t take enough gain out. It’s a weird thing. But the HHa stands up to that better than any mic I’ve ever tried, and I only have a basic 58-style capsule on it right now, so that’s a testament to the circuits downstream. With the gain set to 14 or 15, the HHa can both handle my voice with absolute clarity, and mow down a wall!”

Finsley also praises Lectrosonics’ legendary stability when it comes to the relationship between transmitter and receiver — especially in RF-dense environments like festivals, where the airwaves are saturated with other bands’ wireless gear, event staff walkie-talkies, police radio, concertgoers’ cell phones, and much more. “Nothing kills the moment like singing and having something else cut you off, which I’ve had happen,” he says. “But with Lectrosonics, there have been absolutely no dropouts or any interruptions of any kind. It’s been stellar.”

He also notes that once the initial, quick, and near-automatic pairing process is complete, “I can click the mic or the LR off, replace the batteries on the fly, click them back on, and they come right back to the same frequency without having to find each other again. Even with other guys running other wireless systems close by, I’ve had no interference whatsoever. Once those little blue lights come on to show you’re paired up, you’re in business and nothing can stop you.”

Do any other members of Queen Nation have their eyes (and ears) on Lectrosonics? “Our bass player Parker Combs has this great rig with a boutique amp and in-ear monitors,” says Finsley, “so I think it would be beneficial to him. I actually showed him the Lectrosonics story about Phil Soussan’s bass rig for the Raiding the Rock Vault show in Vegas. As for me, I’m so grateful to

know about this stuff. I’m not going to part with it. It’s my football, so to speak.”

Speaking of football, all this makes it clear what song Queen Nation might dedicate to Lectrosonics if given the chance. Of course, it’s “We Are the Champions.”

Learn more about the band at www.queennation.com