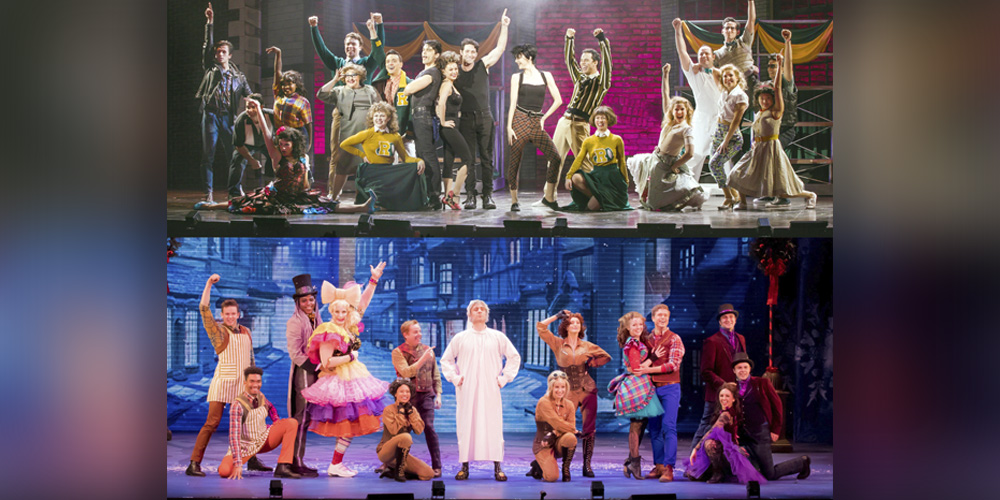 Toronto, Canada (December 12, 2017) — Canadian sound designer and theatre consultant Peter McBoyle, whose long list of credits include Come Fly Away on Broadway and The Wild Party in Toronto, is currently at work on two simultaneous productions of Grease and A Christmas Carol at the Elgin and Winter Garden Theatre Centre, a rare double-decker venue in downtown Toronto. For both productions, McBoyle is using Lectrosonics Digital Hybrid Wireless equipment, with 24 SSM micro beltpack transmitters and Venue receivers in place upstairs at the Winter Garden for Grease, while downstairs at the Elgin 12 SSM micro beltpack transmitters and Venue receivers are at work on A Christmas Carol.

“It is a very sweaty, exuberant show, especially this production, which is directed by Josh Prince, who up until recently has primarily been a choreographer,” says McBoyle. “There are huge dance sequences — ‘Greased Lighting,’ ‘The Hand Jive’ and all those big, famous numbers that the crowds love — that have been really given some energetic and exciting choreography. As a result, the mics and mic packs take a real beating with sweat and physicality. But the Lectrosonics SSMs have held up very, very well.”

McBoyle has deployed the SSM super slight micro transmitters on the production paired with DPA Microphones’ d:screet™ 4061 omni lavalier mics. The ultra-compact form factor of the SSM body pack has been especially beneficial for the actors playing Danny, Sandy and Rizzo. “The three principals are double-packed,” says McBoyle. “The body packs have to be hidden under their costumes in various locations. The small size of the SSM pack certainly helps us to conceal them.”

Downstairs in the Elgin, McBoyle is using the SSM transmitters and Venue receivers with DPA 4061 mic elements, on A Christmas Carol, which puts a Canadian spin on the traditional British panto tradition. “Most of the principals in the cast of 14 are on SSMs and the five lead characters are double-packed,” he reports. “We also have a musician onstage who plays guitar and uses an SSM. It’s nice and easy to get instruments working with SSM packs; they integrate really easily.”

The stacked theatres are close to a couple of other venues that also regularly use wireless equipment. “On the same block is Massey Hall, which has a different band on every day, so we have to make sure that they are aware of our frequencies,” says McBoyle. “Then, just up the street, Bat Out of Hell is playing at the Ed Mirvish Theatre. And if you look up, you can see the CN Tower, which has a lot of broadcast and communications built into it. So it’s a pretty harsh environment, and the Lectrosonics equipment is worry-free.”

New York-based Sound Associates, which has an office in downtown Toronto, supplied the Lectrosonics transmitters and receivers for both Grease and A Christmas Carol, and handled frequency coordination for both theatres. Having so many RF channels in simultaneous operation, and with the theatre complex located in the heart of downtown Toronto, there was the potential for wireless problems. “Because I’m doing both shows we were able to do the frequency coordination well in advance,” says McBoyle. “The theatres are right on top of each other so there’s no margin for error. But everything has been very stable”

He adds, “I also used 12 SSMs on a musical that’s being developed in Toronto called Life After, in September. So it’s been an SSM fall for me.”

The Elgin and Winter Garden Theatre Centre comprises two Beaux Arts theatres stacked one atop the other, joined by a grand staircase. The Elgin, completed in 1914, seats 1,500. Above it, the Winter Garden, designed in the tradition of an enclosed rooftop theatre with trailing vines and tree trunks, accommodates nearly 1,000 patrons. The complex, the only double-decker theatre ever built in Canada, was designated a National Historic Site in 1982.