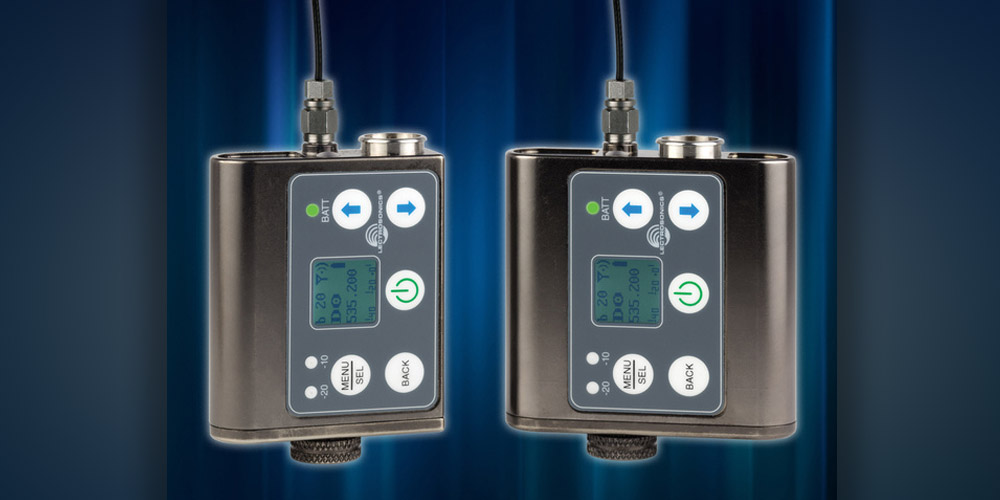 Rio Rancho, NM (October 11, 2017) -- Lectrosonics introduces two new transmitters as the latest generation in the award-winning Digital Hybrid Wireless® SM Series product line: the “wide band” SMWB (single AA battery) and SMDWB (dual AA battery). The two new transmitters have a similar look and feel to previous SM Series units, but with several innovative new features, including the ability to either act as a transmitter or as a body-worn recorder, as well as wideband tuning.

As with current Lectrosonics transmitters, the SMWB and SMDWB units tune across 3 standard frequency blocks and come in several frequency ranges: A1 (470 – 537 MHz) and B1 (537 – 614 MHz) for the North American and export markets, and B2 (563 – 640 MHz) and C1 (614 – 691 MHz) for certain export markets. RF power for these models is selectable at 100, 50, or 25 mW (North American version) and 50 or 25 mW (certain export markets). The SMWB and SMDWB feature the standard TA5 connector with servo-bias mic input. This input is also found on all previous SM Series units and all current TA5 beltpack units like the LT and LMb. Any lavaliere microphones wired for these other Lectrosonics transmitters will also work on these new models.

The SMWB and SMDWB units can be configured either as a transmitter or a recorder, with files stored on Micro SD card memory, allowing use as body worn recorders. Audio files are recorded in the industry standard Broadcast Wave (.WAV) format at 24 bits, 44.1 kHz sample rate. The Micro SD memory card can also be used to update firmware in the field.

The SMWB and SMDWB also feature the same large, backlit LCD found on the latest Lectrosonics transmitters, including the LT, HHa, LMb and DBa. The new models also include an IR port to allow for quick setup when using any IR equipped receiver such as the LR, SRc or Venue 2. This allows for easy integration with a larger wireless system using Lectrosonics Wireless Designer™ software for frequency management and system monitoring.

“The new wideband SMWB and SMDWB transmitters are a natural extension to our complete selection of Digital Hybrid Wireless equipment,” says Karl Winkler, Vice President of Sales and Service for Lectrosonics. “After listening carefully to what our customers have been asking for, we are very pleased to introduce them. The ability of these units to offer a choice of transmission mode or recording offers users a great deal of flexibility.”