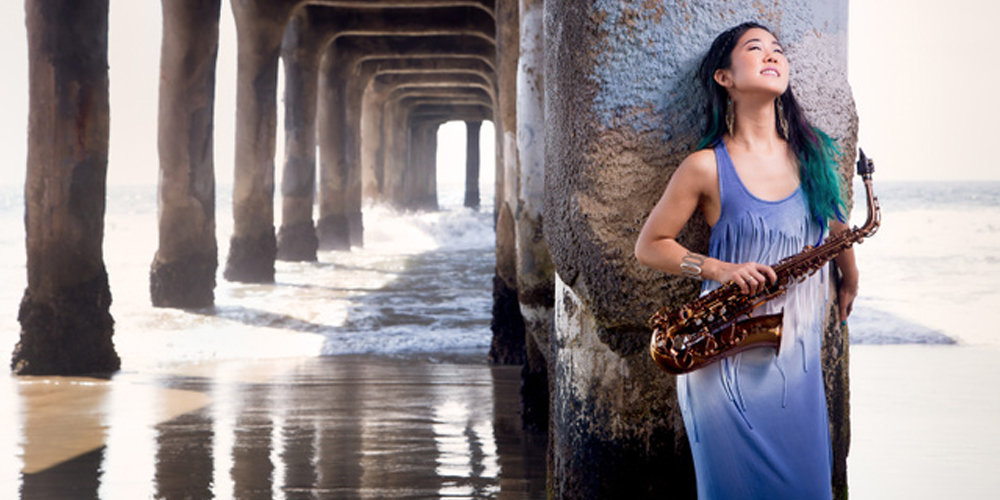 “It’s impossible to perform for every fan”, says Kelly, who has been playing live since the age of 12, when she recorded her first CD release. “Just before the New Year, I thought to myself, there’s got to be a way to get more of my content out there in a very fun, playful, sharable way. How fun would it be to just bring a saxophone to places where people don’t normally see it? Since it’s not with my full band I don’t want to be playing a solo saxophone piece that’s five minutes long, so I’ll just improvise a melody and do short clips.”

Kelly took the idea to her L.A.-based collaborator, Mehdi Hassine. “I said, this is my idea; how do we do it? He’s been my collaborator for all the visuals and audio. He not only has an ear but also an eye. We’ve had a lot of fun. It’s been a learning process with every pop-up.”

Kelly and Hassine record the spontaneous videos into a laptop running Apple Logic with an Apogee Electronics interface using her touring set-up of a Lectrosonics transmitter and receiver and gooseneck-mounted DPA microphone, typically in just one or two takes. “It’s interesting to hear how the ambience varies between locations,” says Kelly, who has shot videos in downtown Los Angeles, on Santa Monica Pier and in Haiti while on tour. “I did one in a parking garage where there’s amazing natural reverb. I did one on a Ferris wheel. They all sound different, which is fascinating to me. And Lectrosonics and DPA captured how the sound changes perfectly.”

“Lectrosonics and DPA is just such an incredible pairing,” she continues. “We were trying to go for the best possible sound. Because I’ve had such an amazing situation with Lectrosonics and DPA in my live shows, I thought, how can we make sure the videos have the same quality?” The answer was to use the same gear, of course. “The thing I love so much about it is being wireless. Whether it’s playing on top of my Prius, on a moving Ferris wheel or on a live show, it gives me such freedom.”

If Kelly’s hope was that the video clips would help her reach a larger audience without playing an impossible touring schedule, she has certainly been successful. “I was on the Blue Note at Sea Cruise as one of the featured performers, along with Marcus Miller, David Sanborn and Pat Metheny,” she recalls. “There was a day off, so I thought, let’s go do a pop-up in the water. It sounds scary, with all the electronics, but the water was calm and I only went up to my waist. I started playing [composer Antônio Carlos] Jobim’s ‘Wave’ and turned around and I had 10 people all with their iPhones out watching and loving it.” The clip, filmed in Haiti, has racked up more than a million views.

Expect to see more pop-ups, which Kelly releases every Thursday, as she and her band continue their busy touring itinerary. “We’re in full-on touring mode, which is my favorite. We just finished our West Coast tour where I just did a pop-up—I won’t give it away—that was very unusual and had big, live animals. Next I go to Spain then Sweden then we’re in Germany for all of May. I’m very excited for that, and hope to get some historical shots. And it’s fun to go to new places and have new audience members who found me from the pop-ups.”

For more of Grace Kelly’s music and to see her Pop Up Series, visit: http://www.gracekellymusic.com/.