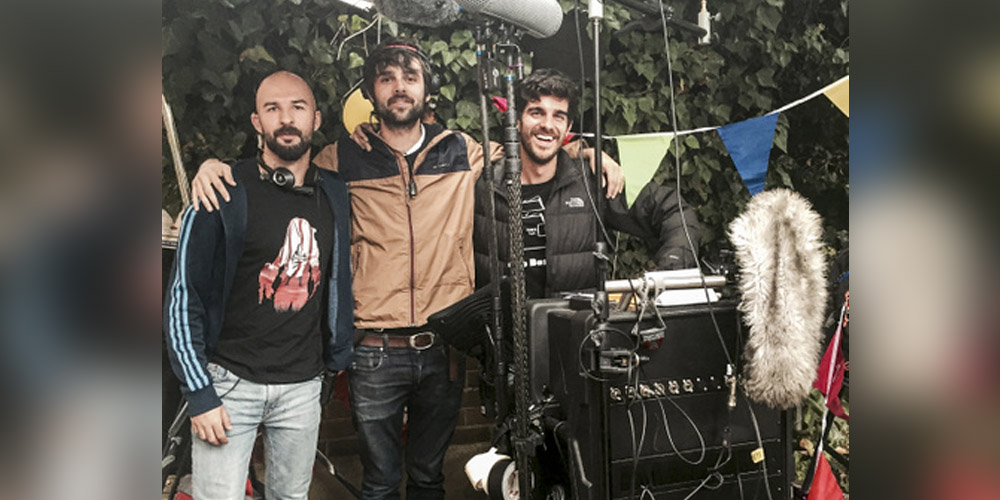 "What I like about Lectrosonics gear is that you get rock-solid RF, great quality audio, extremely easy remote control and superb build quality all in one package."

Barcelona, Spain (March 29, 2017) —Capturing dialogue between two half-naked actresses in the confines of a wide beam river boat on Regent's Canal in London might be a daunting challenge for some location sound mixers. But Diego Casares, with his collection of Lectrosonics Digital Hybrid Wireless equipment, including SSM micro belt pack, LT belt pack, UH400a and UM400a transmitters paired with UCR411a receivers, was up to the task recently during the filming of As We Like It.

"When you have a half-naked actress in a 3-meter by 3-meter room with a super-low ceiling, that's when the Lectrosonics SSM really shines," says Casares. During his 14 years in the audio industry he has collaborated with directors such as Alejandro Gonzalez Iñárritu, Michel Gondry and Jaume Balagueró and worked as a sound editor, ADR recordist and dubbing mixer He now runs the Spain-based location sound and postproduction company Let's Sound alongside the sound mixer Aritz Sanjurjo.

As We Like It, directed and edited by Spanish Academy Award-winner Carlos Marques-Marcet, and produced by Lastor Media (Spain) in coproduction with VennerFilm (UK) and La Panda Productions (US) stars Oona Chaplin, Natalia Tena and David Verdaguer and features a guest appearance by Geraldine Chaplin. Casares worked with boom operator Juan Montoto Ugarte on the six-week shoot in east London. Marcos Cardós assisted on scenes that required a second boom operator.

Marques-Marcet likes to give his actors freedom of movement, so anything might happen on-set, says Casares. "There was a scene where Eva [Oona Chaplin] and Kat [Natalia Tena] were supposed to have sex, so we were not allowed to mic them under their clothes as they could potentially take them off during the scene. That was when the SSM came into the action." Lectrosonics' SSM transmitter is so tiny that it can be easily hidden in clothing or, as in this case, an actor's hair.

"These special moments that Carlos and his actors uniquely create on-set would be impossible to recreate on the ADR stage," he says. "But with the help of Jesús Martos and Danae Gatell, the incredible hair and makeup team, and Oona's willingness to wear the SSM and mic capsule hidden in her hair, we managed to capture the performances."

Casares continues, "On my visit to London to scout this project I realized that we would need some quick-to-install but good-sounding plant mics to capture dialogue inside the boat. The boat was so small that it was difficult to place a boom in the sweet spot. I chose a pair of DPA 4098 supercardioid mics and could not have been happier. Through a Lectrosonics Digital Hybrid system they sound amazing."

The production sound team also paired Lectrosonics transmitters with Schoeps CMC641 supercardioid and Super CMIT 2U and CMIT 5U shotgun mics. They additionally used a selection of DPA lavaliers, a DPA 5.1 surround mic, an A-T BP4029 MS stereo shotgun and a hydrophone during the shoot. A Schoeps CMR amplifier enabled Casares to plug an MK41 capsule straight into a Lectrosonics transmitter. "That was one of our most valuable tools for the music scenes shot on the boat," he reports.

"I was extremely happy with the performance of the RF in our setup. We got around 75 meters [81 yards] range without dropouts on a Steadicam shoot with the LT transmitters and 411a receivers on a rainy day in Lower Clapton. And we didn't have a single dropout when mixing from outside the boat during three weeks at our main mooring position in Homerton."

He continues, "What I like about Lectrosonics gear is that you get rock-solid RF, great quality audio, extremely easy remote control and superb build quality all in one package. After more than 10 years on the market, the Lectrosonics UCR411a is still the best of the best for RF performance in portable receivers."

For a hidden-camera shoot on a busy London street in which Roger (played by Verdaguer) interacts with unsuspecting passersby, Casares assembled a Lectrosonics rig to capture the exchanges and enable the director to communicate with the actor. Verdaguer had a Lectrosonics LT and DPA 4098 hidden in a tray that he was holding and wore a cap that hid an SSM transmitter and Countryman B6 lavalier.

"The form factor of the SSM made it possible to hide both the transmitter and mic capsule in the baseball cap," says Casares. Marques-Marcet directed Verdaguer via a clip mic and Lectrosonics LT transmitter. Montoto Ugarte (boom op) stood near Verdaguer with a backpack containing a UCR411a receiver connected to a wireless transmitter that relayed the director's instructions to the actor's earpiece.

"We captured some unique moments during the shoot that made us believe we were doing something special," says Casares. "It also pushed the crew to do their best, shooting in a way where anything could happen in a scene. Because of that, and the small size of the boat interior, radio mics were essential — so the Lectrosonics kit we were using was one of our most valuable tools."