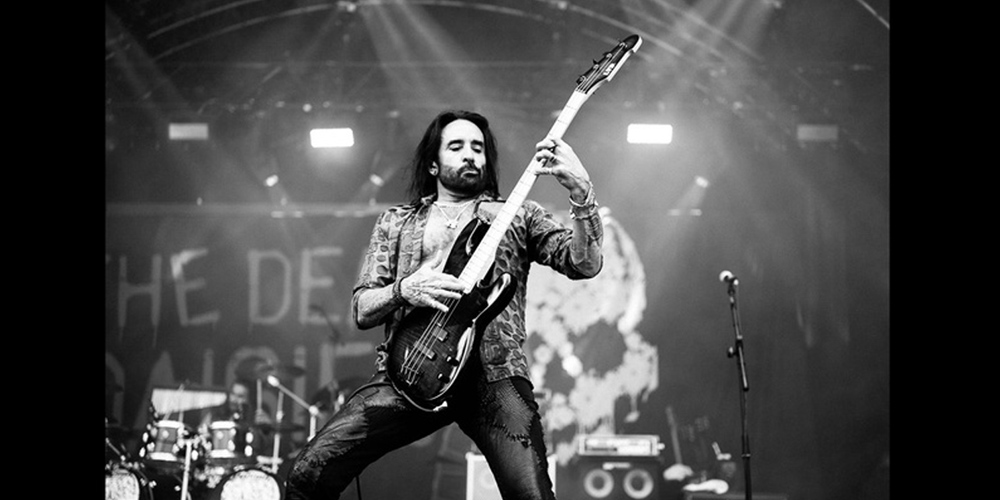 "When you're jumping around stage in city after city, with the stuff riding around on the truck in between, there is no better test. To have a wireless system that we can depend on around the world, like we do with Lectrosonics, is just priceless."

"We first heard about Lectrosonics from Doug Aldrich, who heard about their gear from Phil Soussan," recalls Mendoza. No surprise there, as Aldrich had also played with bassist and Lectrosonics user Phil Soussan in the Las Vegas revue Raiding the Rock Vault. "Doug was speaking very highly of his Lectro LT and LR systems. I have to admit I was the one who, at first, was just waiting for the glitches to happen. But we tried it out and were just blown away."

"We tour, literally, around the globe," Mendoza continues, "This past year we traveled through Korea, Japan, Europe, the U.S., Mexico, and we've had problems making other wireless systems work. Regulations about frequency bands vary from country to country, and not all systems are able to deal with all of them. Subsequently, you find yourself putting one system together for one country and another for the next, and so on." With up to 3,072 discrete frequencies selectable in a tuning range of 75 MHz, however, the Daisies finally found the solution for every stop on their hectic schedule.

That tuning flexibility comes in just as handy in multi-band settings, as Mendoza explains: "We often find ourselves in festivals with ten or 12 bands playing, and with other systems, the frequencies all get taken up. Everyone has their body packs, their wireless mics, et cetera, so the airwaves get really crowded. With the Lectrosonics stuff, you just push a button [to pair your transmitter and receiver] and it finds the clearest band for you.

"Another thing that comes into play is that they're so compact. You start putting a touring system together and every kilo costs you more in shipping or flying charges," says Mendoza. "So, I was the first to try Lectrosonics and now the whole band is on it."

Tone — the dynamic, responsive, and musical communication of players' interaction with their instruments — is important to performing musicians and their audiences, and the wireless system they choose has to be up to the task. "Being a bass player, I've worked with some other wireless gear that really didn't keep the integrity of the low end, which is paramount for a hard rock show," says Mendoza. "But the Lectrosonics stuff is as good as using a cable, and after just a couple of shows, the other guitarists in the band agreed."

On the technical side, the high-impedance, low-level output of most electric basses and guitars proves no problem for Lectrosonics as well. "Most of the time I'm not a fan of active pickups on my bass, so it's a straight-up passive guitar-level signal," says Mendoza. The bass goes right into the transmitter, which lives on my belt clip, and the receiver directly feeds my amp head. With the guitar guys, it's first in line in their pedalboards, and we get plenty of gain and headroom."

Mendoza also has high praise for Lectrosonics' reliability: "I know it can sometimes sound trivial to talk about 'the rigors of touring'," he says, "but believe me, when you're jumping around stage in city after city, with the stuff riding around on the truck in between, there is no better test. If a wireless system goes down in the middle of a tour, you have to take time out to check out other gear, make sure it works for all the countries, and so on. To have a wireless system that we can depend on around the world, like we can with Lectrosonics, is just priceless."

To learn more about The Dead Daisies, visit www.thedeaddaisies.com.