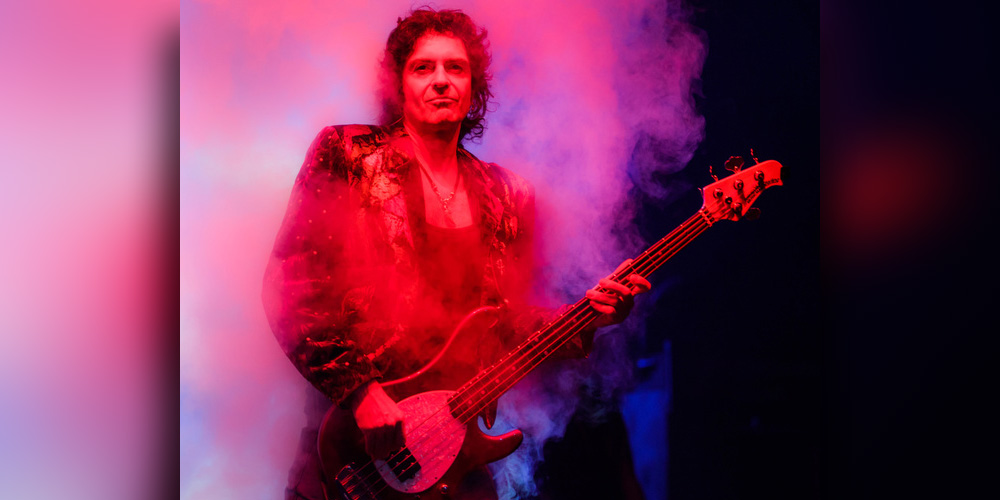 “These musicians are hardcore cable guys, and when both of them tried my system – they wanted their own straight away."

Las Vegas, NV (August 10, 2016) ― Bassist and guitarist Phil Soussan’s credits read like a who’s who of hard rock royalty, from Ozzy Osbourne to Mötley Crüe frontman Vince Neil, from Billy Idol to Jimmy Page and beyond. For his most recent residency at the Tropicana Hotel in the acclaimed musical revue, “Raiding the Rock Vault,” Soussan counts on Lectrosonics Digital Hybrid Wireless gear for the show for its high audio quality and portability, including LT belt-pack transmitters and an LR receiver.

“I have two LT transmitter units attached to my straps, and the LR receiver is first in the signal chain on my pedalboard, mounted there with Velcro, and they literally take the place of the cable that would be hanging from my bass guitars,” says Soussan. “It’s funny, because traditionally Lectrosonics receivers and transmitters are often more associated with video, broadcast and theatre performance. But they are the ultimate solution for performing musicians.”

First among the many virtues that Soussan points out to fellow hard rock titans is the high audio quality of the Lectrosonics wireless system. “I rotate on bass with Hugh MacDonald, who plays with Bon Jovi. Doug Aldridge, the guitarist of Whitesnake is also part of the lineup,” he says. “These musicians are hardcore cable guys, and when both of them tried my system – they wanted their own straight away. I’ve tried all of the usual brands for wireless —and Lectrosonics is the only system where I can literally say that I can’t tell the difference between it and a cable.”

“Wireless is important in a production like this, where you have visuals and moving props, and you have dancers. The less cables onstage which get in the way, the better,” Soussan adds. “I also do a lot of singing, so if I make contact with a mic I want to be as ground-isolated as possible. I’d rather not become a fuse,” he laughs. “So the only real cable goes from the output of my pedalboard, which contains various things for drive and a bit of chorus, to my amp. And that cable can be easily tucked away.”

Soussan also appreciates how well the LT “likes” his bass guitar signal. “One nice thing about the LT is that you can fine tune the input gain in 1 dB increments, and switch the output power between 50 and 100 milliwatts. I’m using active pickups for this show, and I’ve tried it on a variety of bass pickups and have never had any problems with input impedance changing my tone.”

Stability in venues full of devices that require wireless bandwidth is another key benefit. “At any show I do, the house will be using wireless mics, in-ear monitors, and so forth. Do a multi-band festival, and that compounds six or seven times. The Lectrosonics system has never given me a problem in these kind of RF-dense environments. No dropouts, no crosstalk, no worries. That's partially because where other manufacturers give you perhaps a hundred channels or so, my LT’s can do up to 3,072. It's really industrial strength.”

Being a bass player who relies on wireless also affords Phil the added benefit of allowing him to seamlessly swap instruments. “I like to use two [bass] guitars at minimum. I found that you could program two frequencies into the receiver as a group,” he adds. “So I just hit the switch on the LR receiver and switching guitars is a breeze.”

When you work as many different kinds of shows as Phil Soussan, extreme portability is also important. “I also do a lot of one-off shows, tributes, celebrity and benefit shows, that kind of thing,” he says. “Most of those are fly dates, and wireless systems typically involve a rack unit or something larger and heavier. But the LT and LR together literally add up to the size of a deck of cards. With them in my carry-on and a guitar case, I’m all set.”

Last but not least is the all-important durability factor. “The LT and LR are beautifully made,” says Soussan. “They’re all metal, machined from billet, and as careful as you try to be on the road, things get knocked around and stepped on — sometimes by a 250-pound roadie carrying a 4x10'' cabinet! The Lectrosonics stuff has survives, which I can’t say about many other things.”

When the show “‘Raiding the Rock Vault’ wraps up at the Tropicana this summer, the show has plans to be part of a PBS special and it will continue in the future at another hotel. Soussan will also be taking his Lectrosonics system on the road for another tour with Last In Line, which started out as the original Ronnie James Dio band. He also has plans for an upcoming record and a European tour beginning in October.

Learn more about Phil’s career and find out where he’s playing next at philsoussan.com.