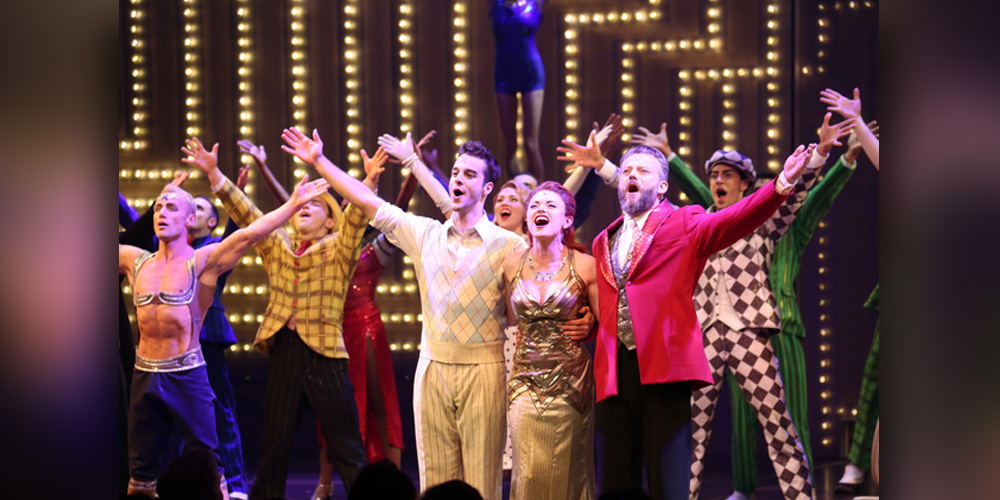 “With the SSM, the sound quality is better, and the manageability with the batteries and the remote functionality are bonuses. The battery life is also great. All this with the small form factor. The takeaway for us is that we want to specify them on all of our shows.”

New York, NY (July 19, 2016) — Montreal-based entertainment company Cirque du Soleil, which currently has more than 15 major shows running worldwide, recently opened its first musical theater production on Broadway, at the Lyric Theater. Paramour, a story set during the Golden Age of Hollywood about a woman who must choose between love and art, features a cast of over three dozen acrobats, musicians and singing actors that are exclusively equipped with Lectrosonics’ SSM Digital Hybrid Wireless micro belt pack transmitters.

“We’re using 36 SSM radio transmitters with Venue2 receivers” reports front-of-house engineer David Patridge, who is working with long-time collaborator John Shivers, the show’s sound designer. The equipment was supplied by theatrical sound reinforcement specialist company Masque Sound for use at the Lyric Theatre which, with an audience capacity of 1,896, is the second largest theater on New York City’s Great White Way.

“Every performer who has any kind of line or is singing is wearing one. We are also using the SSMs to amplify a wireless guitar, a wireless piano, a wireless trumpet; in fact, there’s a bunch of instruments that people wander around with on stage that are fitted with SSM transmitters,” says Patridge.

“Sonically, the SSM is terrific. From an audio standpoint, it really is a winning product,” he continues. “When it came out we were able to try it in the field opposite other radio transmitters. We compared the audio quality on an actor, A/B’ing back and forth, with two mic elements and two transmitters on the person. We really liked the quality of the SSM. So it was a no-brainer for this production.” Almost every SSM on the show is paired with a DPA Microphones d:screet™ 4061 miniature omnidirectional microphone, he reports.

But the SSM offers more than just superior audio quality, says Patridge. “The actors wearing them along with everybody in the hair and wig department love the form factor because they are substantially smaller than other transmitters that are on the market. It often becomes difficult to hide transmitters, but we heard a lot of positive comments made by all of the people who deal with hiding these things on the actors. So that is also a winning factor for the SSM.”

In fact, three of the principal actors are double-miked, he continues. “They’re out on the stage the whole time, and it would be very inconvenient to have to rip microphones off them; just getting them off the stage would be a problem. They each wear two SSM transmitters and we use a Sennheiser MKE 1 for backup. We set one of the mic elements back behind the head of the other mic, so it pretty much looks like one microphone, but we still have a second element in case something happens to the first one. Due to the small form factor of the SSM, the actual amount of real estate that the two transmitters take up on a performer is pretty much what a normal transmitter would take.”

The show’s production crew has also been enjoying the remote control capabilities of the SSM, Patridge reports. “We all downloaded the LectroRM application, to be able to send DTMF tones into the microphone in order to turn LEDs off, lock them, change gain and so on.”

Adopting the Lectrosonics SSM transmitter for this show has been an upgrade on several levels, according to Patridge. “With the SSM, the sound quality is better, and the manageability with the batteries and the remote functionality are bonuses. The battery life is also great. All this with the small form factor. The takeaway for us is that we want to specify them on all of our shows.”