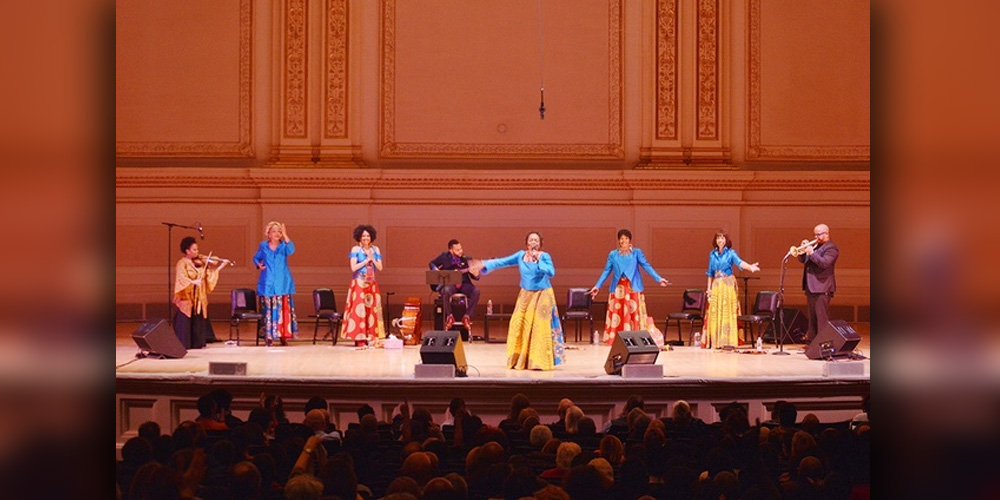 “All six Sweet Honey mics have to be fully active, so noise floor issues are the worst case in our situation. The HH transmitters are audibly quieter than other options, even compared one-to-one, and in multiple microphone situations are the only possible choice.”

Sunderland, MA (May 10, 2016) — Although Art Steele professes to a motto of marrying technology with music on the web site of Sweet Honey In The Rock®, the Grammy Award-nominated a cappella ensemble with whom he has worked for over three decades, his motto might also be: “Have bag, will travel.” Steele, audio mixer and technical director for the African-American female vocal group for over three decades, has put together two shoulder bags loaded with different sets of Lectrosonics Digital Hybrid Wireless® equipment, picking up the appropriate one for the next show as he heads out the door to the airport.

“Bag number one—we just worked at Carnegie Hall with this one in February—includes a Venue receiver with two spare power supplies and two SNA600 omni dipole antennas,” says Steele, who is the owner and manager of Sunderland, MA-based live production audio services company Audio Promedia. He is also a recording and touring blues guitarist and vocalist. “There are six SMDa belt pack transmitters paired with DPA 4088 headsets, four on Block 20 and two on Block 25, plus three UT400 handhelds with supercardioid mic capsules and five Shure WL185 cardioid lav mics fitted with Lectrosonics connectors.”

The other bag, which Steele most recently took to Sweet Honey’s double-bill dates with Ladysmith Black Mambazo in Texas in early March, also features a Venue receiver with two SNA600 antennas and spare power supplies. The more streamlined Lectrosonics gear complement is rounded out by five HH handheld transmitters fitted with HHC cardioid condenser capsules, operating on Block 24, with a sixth HH-HHC on Block 20, and Steele’s trusty Grado Labs headphones, which he packs in either bag.

“We are fans of the programmable soft button on the HH units,” says Steele. “We use it at festivals where the mics might have to sit in the stage wings for an extended time while other acts perform. At performance time it just needs a simple touch by the artists to go to ‘full on’ as they walk onstage. And on occasion we have used the switch in ‘cough’ setting, which offers a momentary mute.”

Having multiple wireless microphones all live at the same time cumulatively raises the noise floor, comments Steele. “Most performance groups use only one or two handhelds so this is less of an issue. However, all six Sweet Honey mics have to be fully active, so noise floor issues are the worst case in our situation. The HH transmitters are audibly quieter than other options, even compared one-to-one, and in multiple microphone situations are the only possible choice. Plus, the configurable Smart Noise Reduction [SmartNR™] in the receiver system reduces the noise floor even more.”

Steele explains that the Odyssey bag-style rack cases are 3U high but only eight inches deep. “So they fit in even the smallest commuter aircraft overhead, and they are ready to deploy with no external gear needed,” he says. “I also have a shoulder bag with two ALP500 sharkfin antennas that travels with either rack bag.”

Steele built a case to store the microphones and transmitters beneath each Venue receiver while the bag lids include a separate pouch for power supplies, spares and cables, making the bags fully self-contained. “I use hard-shell zip pouches to safely hold the transmitters with the headsets attached. They provide excellent protection and there is even room for batteries,” he adds.

Sweet Honey In The Rock was established as a quartet in 1973 in Washington, DC, subsequently expanding to six members. The group currently includes co-founders Carol Maillard and Louise Robinson, veteran members Nitanju Bolade Casel and Aisha Kahil, and Shirley Childress, Sweet Honey’s American Sign Language interpreter since 1981. Steele first encountered the group in 1978 in New England, working with them annually before being invited to join full-time in 1982. In more than thirty years of working with the group, Steele has only missed three shows.