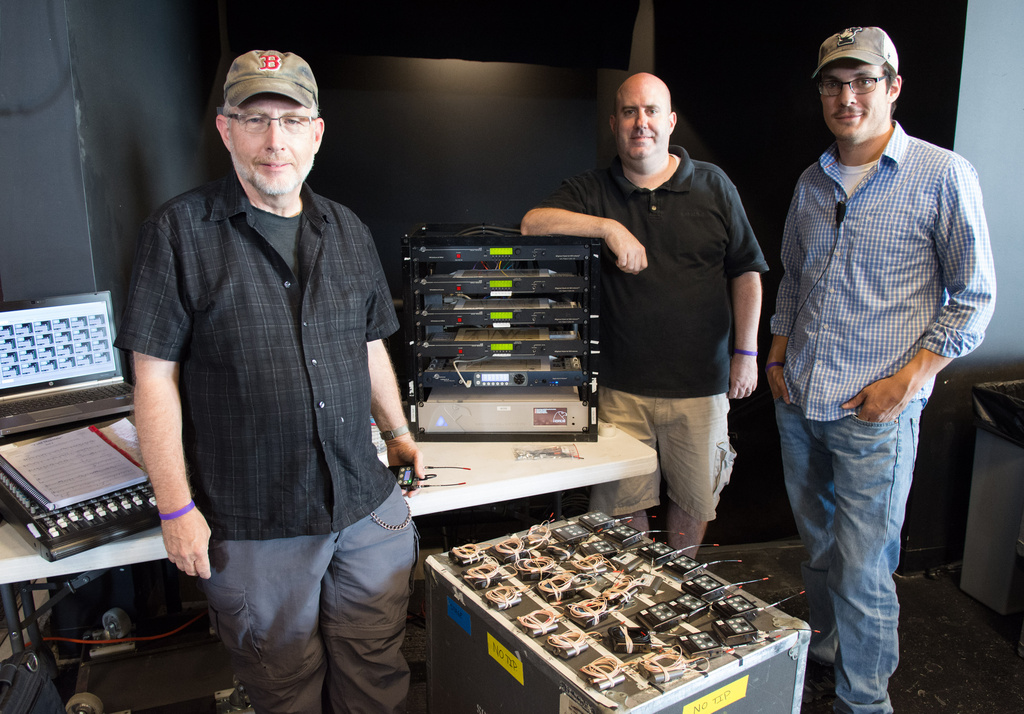 Santa Fe, NM (October 22, 2015) — Classical music recording and production company Soundmirror has been an early adopter of Lectrosonics wireless technology ever since acquiring the manufacturer’s 200 Series analog transmitters nearly 20 years ago. More recently, the company put the first Lectrosonics Venue 2 Digital Hybrid Wireless® modular receiver to work on the world premiere of Cold Mountain at the Santa Fe Opera in New Mexico, an opera composed by Jennifer Higdon with a libretto by Gene Scheer.

A number of transmitters were deployed in the minimalist scenery in order to unobtrusively capture some of the on-stage action. The dual-battery SMQVs were mainly reserved for the female singers, where the smaller pack was a better fit for the tighter costumes.

“The nice thing about the Venue 2 is being able to tune across three full blocks with a single unit,” comments Donahue. Designed to address the challenges of increasingly congested RF environments, the new receiver tunes across a wide 220 MHz range, matching the flexible tuning ranges of the SSM and L Series "large bandwidth" transmitters, including the LT body packs used on Cold Mountain. Each of the Venue 2’s six receiver modules covers 75 MHz, or three Lectrosonics blocks.

“From a logistical standpoint, walking into a location where we can use blocks 21, 22 and 23, it’s easy enough to find frequencies that work. But once you start operating all 30 wireless channels in close proximity to each other on a 46-foot by 28-foot stage there’s always a need to adjust some frequencies. Being able to move between blocks without having to think about what hardware we have is a quantum leap forward for us,” reports Donahue.

Williams says that Lectrosonics provided him with a plot of the available frequencies in Santa Fe, but the day before the opening he had to change some packs around. “The tuning on the Venue 2 is even quicker than on the transmitter—it’s very quick, very simple and very intuitive. The fact that the Lectrosonics stuff is so rock-solid meant that I didn’t worry about what I was mixing and matching. Working with them is just a joy,” he says.

“We’re using Lectrosonics exclusively, mostly because of sound quality, which has always been the reason to use Lectro,” says Donahue. “The first wireless units we owned were the 200 Series, and we bought them because they sounded better. Opera is a very, very different kind of vocal source from virtually anything else; it’s akin to putting a microphone in front of a jet engine. What we’ve found with Lectrosonics is that we can set them up so that we don’t get the pumping and distortion we would get with companding equipment from other vendors.”

Williams also got to work with the new Lectrosonics Wireless Designer software for the first time during Cold Mountain. "I love the new software,” he says. Each receiver window on the screen displays 10 seconds of history. “There is lots of continuous information, and the 10-second window is terrific. It’s very easy to enter information, too."

Donahue recorded 80 tracks at 192 kHz to redundant Merging Pyramix DAWs, with a laptop for back-up, via Merging Technologies Horus interfaces and a SmartAV Tango control surface. “We were outdoors, so we had to deal with a lot more environmental issues compared to working inside—wind and rain, as well as the highway, which is a little over a quarter-mile from the stage.” In such situations, he says, “We record as much as we can so we have as much material to work with as possible.”

The team recorded four performances of the opera, which, like the award-winning 2003 motion picture, is based on Charles Frazier’s best-selling and prize-winning Civil War-era novel. The production, which was in repertory during the month of August, is scheduled for release on the Pentatone label in surround SACD format.