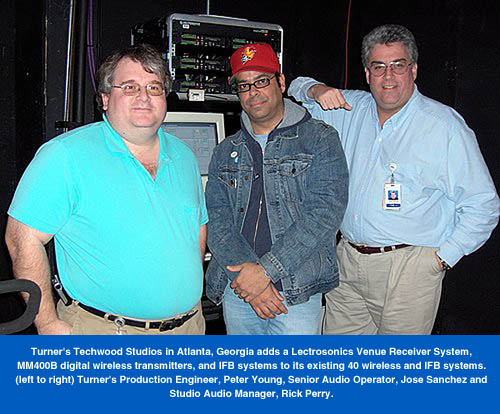 ATLANTA, GEORGIA: Turner Studios has added to its extensive inventory of Lectrosonics wireless microphone and IFB systems as the company expands its Techwood campus television production facilities in midtown Atlanta. A six-channel Lectrosonics Venue Receiver System, SM Miniature Digital Hybrid Wireless belt-pack transmitters, and multiple IFB systems have been purchased for the first of two new soundstages at the studio facility, where they will join 40 Lectrosonics wireless microphone and 19 IFB systems already in use.

A new eight-story building, that includes two massive soundstages on the lower level, has been constructed next to the existing studios at the Techwood facility. According to production engineer Peter Young, the man responsible for looking after all of the wireless systems at Turner Studios, "We're slated to start using the larger of those two stages by the end of March. This new Lectrosonics Venue Receiver we purchased is fully loaded and is for the first soundstage there.

Turner's Techwood campus has relied on Lectrosonics RF equipment for nearly five years, Young reports. "We started using Lectrosonics in the studios here in 2001. Our older systems had become problematic and weren't performing the way we wanted them to. Plus, our film and video unit had been using some Lectrosonics systems and really liked them. So we made the decision and bought six microphone systems for our NBA stage. They performed so well, and our audio operators liked them so much, that we started buying more systems to upgrade the different studios."

The six Lectrosonics UDR200c diversity receivers and UM200 belt-pack transmitters purchased for Studio A, which is dedicated full-time to NBA programming and has been renamed Studio J in honor of a former employee, are still in use, reveals Young. "When I put those first six mic systems into the NBA studio, I also put six of their IFB systems in there. We've been using all of those ever since. They're performing just great. I haven't really had a reason to change, but anything I'm buying now is the 400 Series Digital Hybrid Wireless stuff, and for all the newer systems I'm buying Venue Receivers."

He continues, "We generally have six mic systems assigned to each stage. Right now we have four sound stages that are in use. We already have one Venue Receiver in Studio C. That studio is where we shoot the Turner Classic Movies introductions. We have a set for presenter, Robert Osborne and a different set for Ben Mankowitz."

Young recollects that he first saw the Venue Receiver at the InfoComm trade show in Atlanta two years ago, along with the prototype of the SM miniature belt-pack transmitter. "We received our first four SM packs a month ago. Everybody loves them. When we're working on a show like 'Movie and a Makeover,' where we have female talent, the ability to hide that really small pack is very helpful to our guys."

Basketball fans tuning in to Turner's "NBA on TNT" will have noticed a new studio set for the live NBA broadcasts. In a testament to Lectrosonics and Turner Studios' audio crew, the studio's Lectrosonics systems made a smooth transition from the old set. "The NBA set is a very RF (Radio frequency) unfriendly environment due to the dozens of plasma screens and other electronics on the set. I reinstalled the antennas in there after the new set was completed, and since the start of the season I have not heard of any RF problems."