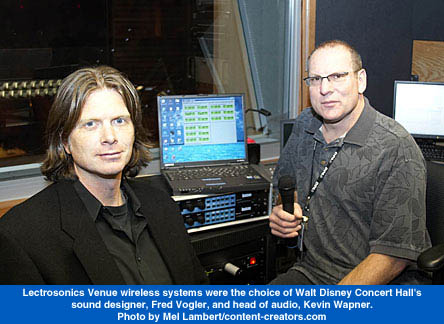 LOS ANGELES, CALIFORNIA: The world-famous Walt Disney Concert Hall, winter home for the L.A. Philharmonic, and venue for a wide range of musical events, has added an innovative wireless microphone system manufactured by Lectrosonics to match the environment's exacting technical requirements. The nine-channel Venue receiver system comprises a modular UHF design that operates with Digital Hybrid Wireless® transmitters, and/or a variety of analog transmitters. The receiver utilizes a mainframe assembly that includes an antenna multi-coupler, communications interface and mounting for up to six receiver modules.

According to Kevin Wapner, head of audio at Walt Disney Concert Hall, "We have a total of nine Lectrosonics SM Series belt-pa transmitters and nine UT Series handheld models equipped with AKG C5900 super-cardioid condenser capsules." The 18 Venue receiver modules are paired to offer nine channels of audio. The system's Ratio Diversity scheme blends the output of each two receivers based on which one is picking up the better signal. For belt-pack transmitters, the "Super Mini" SM units are being used with DPA 4066 headset microphones.

"The wireless system has performed flawlessly since it was installed in September 2005," Wapner confides. "We handle a number of jazz performances here at Walt Disney Concert Hall, together with operas and other musical events where we need mobile operation. The receiver rack is mounted in the ceiling directly above the performance stage, and is linked to the mix location in the rear of the auditorium. We can also remotely control a number of critical systems parameters from the mix position via a conventional laptop PC, including channel settings, as well as monitoring battery life and signal levels." Each Venue receiver is operated remotely using Lectrosonics' LecNet2 software protocol and a network connection. The firm's VR Panel control software is included with each Venue system. 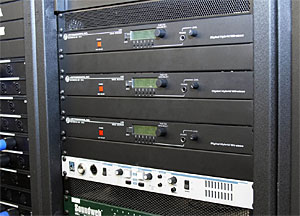 "We first tried out the Lectrosonics Venue system at the Hollywood Bowl - the summer home of the L.A. Philharmonic," recalls Fred Vogler, the venue's sound designer. "The results were spectacular and lead to a decision to add them at the Walt Disney Concert Hall. We have used the rig on a number of events, ranging from 'The Blind Boys of Alabama Christmas Show,' and our New Year's Eve 'Big Bad Voodoo Daddy Holiday Concerts,' to Manhattan Transfer and similar presentations. The belt-packs are extremely compact - and easy to conceal on a performer - while the handheld mics feature excellent AKG capsules.

"We always keep four handhelds near the stage area just in case we need them at the last minute. You never know when you'll need an announcer microphone or - as happened during a recent concert - a mike to cover a backline amplifier. Rather than have to run a cable across the stage, we can simply hand a mic to the announcer. Simplicity!"

"These wireless mics were cost-effective and have been 100% reliable. We have never lost a performance," Vogler concludes. "The remote control functions are excellent, while the ability to monitor system parameters, including battery life remaining for each transmitter, is invaluable. The wireless transmitters and receivers are also well built. Having visited the Lectrosonics manufacturing facility in New Mexico, I can vouch for the company's commitment to keeping the sound quality we can offer here at the Walt Disney Concert hall as high as possible!"