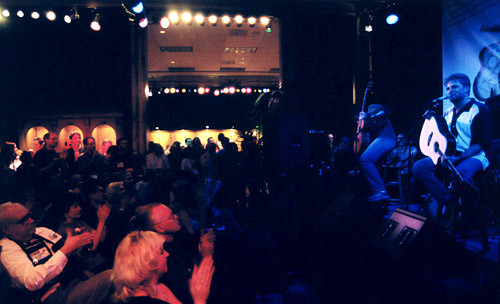 RIO RANCHO, NEW MEXICO: Prestigious guitar manufacturer, Taylor Guitars is set to wow NAMM attendees beyond their usual artists showcase at their Taylor Booth/Meeting Room 213 A/B at specific times during the show. This year Taylor's in-booth stage will host a variety of musical styles performed on a wide range of Taylor models backed by a stellar sound system designed by Gary Hedden together with SLS loudspeakers.

As in 2005, Taylor is using twelve channels of Lectrosonics Venue System receivers and twelve of their IM transmitters to deliver realistic dynamic range and extended frequency response while allowing for quick set changes and freedom of movement for the musicians. In addition, Taylor is using Lectrosonics UM400 transmitters and R400a receivers for other booth demonstrations. DPA 4065 headset mics are employed both for performers and for Bob Taylor's morning presentations.

Performing at the Taylor Booth is Johnny Rzeznik of the Goo Goo Dolls, double-platinum winning pop group, Switchfoot, and Styx/Damn Yankees guitarist Tommy Shaw. The Goo Goo Dolls, alternative rockers who evolved into a super-successful mainstream pop act, have forged a string of hits written, co-written, and/or sung by charismatic guitarist/front man, Johnny Rzeznik, beginning in 1995 with the Top 5 acoustic-driven ballad, "Name." Switchfoot is based in San Diego, and guitarist/leader, Jon Foreman, was one of the first recording artists to road-test Taylor's T5 electric/acoustic. In 1999, the group had a huge hit, and won a Dove award for the title cut of their second album, "New Way to be Human." 2000's "Learning to Breathe" showed a new, mainstream direction for Switchfoot. Tommy Shaw joined Styx in 1975, the year the band rocketed up the charts with "Lady." Shaw wrote much of the group's most memorable material, including "Fooling Yourself" "Blue Collar Man" and "Too Much Time on My Hands" and his songs have been recorded by Ozzy Osbourne, Alice Cooper, Vince Neil, Cher, and Aerosmith.