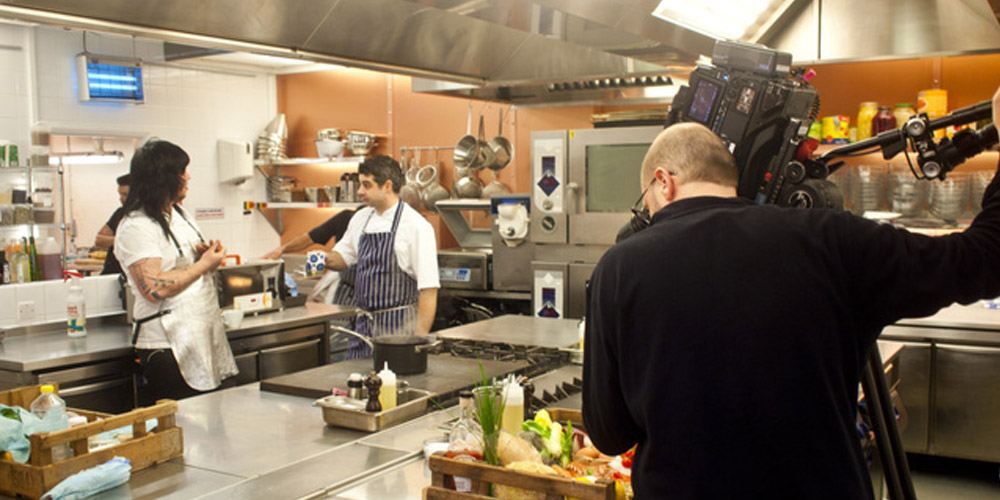 London, UK (May 7, 2015) — Lectrosonics caught up with Matt Bacon, one the UK's leading TV sound recordists, on the set of the hugely successful Great British Menu TV show, produced by Optomen for the BBC. Since 2005 Matt has been working as a freelance Sound Supervisor and Sound Recordist on television dramas, reality shows and documentaries as well as a variety of entertainment productions, including all ten series of Great British Menu.

The show is a prime time cooking contest in which the nation’s top chefs compete for the chance of cooking a course at the series banquet held for a topical cause. Each week three chefs from a region of the UK start by cooking their four course menu for a veteran chef of the competition, including previous GBM winners and 2-Star Michelin chefs Marcus Wareing, Tom Kerridge and Daniel Clifford. The veteran chef scores each course and ultimately decides which two chefs make it through to the judges’ chamber, where each chef must present their four course menu to judges Matthew Fort, Pru Leith and Oliver Peyton. The winner of each region goes through to the final where they must once again cook their four course menu for the judges in the hope one of their dishes is chosen for the banquet. Only the best four dishes chosen by the judges will succeed.

“I use Lectrosonics pretty extensively on the show,” says Matt Bacon. “In this kitchen I use four Lectrosonics SMDB transmitters on block 606 (UK Channel 38) to feed SRb receivers which are housed in an Lectrosonics Octopack that uses a combination of ALP 620 and SNA 600 antennae. I also use a Lectrosonics IFB system (a T4 transmitter with multiple R1a receiver packs) to allow the director to speak to the cameramen via covert earpieces.” 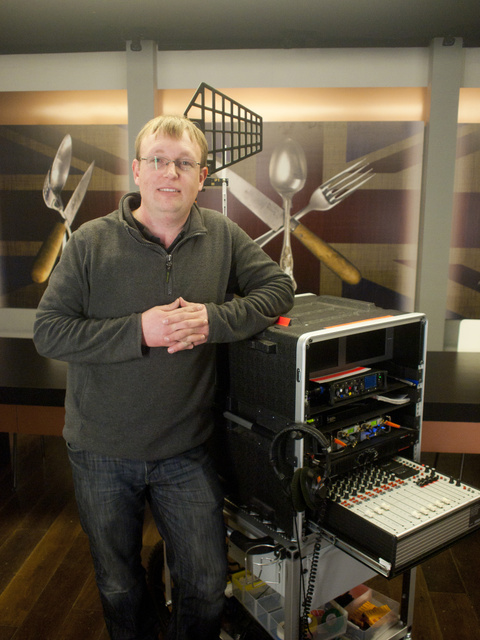 While the set up for the show is not complex, it needs to be rock solid as the action is recorded in real time. Filming takes place in sets across multiple floors and covers five filming zones (kitchen, judges’ chamber, tasting kitchen, the 360 space and the green room) where the Lectrosonics system works well without the need for having antennae distribution in each zone. The three chefs all cook in the kitchen at the same time which often leads to a great deal of unscripted and unprompted banter so can be a challenge to provide a broadcast mix - especially when blast chillers, vacuum pack machines, dehydrators, pressure cookers and ice cream makers are all being used.

“On this type of show we can't stop the whole kitchen for an interview because everything is so time critical so I often find myself having to mix two separate conversations at once which can be interesting at times,” adds Bacon. ”There are up to six cameras filming at any one time so they don’t miss a beat and neither can we in the audio department. In the finals week when all the eight regional winners return to compete against each other we are using around 20 frequencies so careful planning is taken to make sure everything is intermod free.”

“I was introduced to Lectro years ago when I worked as a boom op. Several mixers I worked with used T1 transmitters and R1 receivers as their IFB system of choice due to its rugged design, clear signal and reliability,” says Bacon. “Following OFCOM's decision a few years ago to move the PMSE market from Channel 69 to Channel 38, I took the opportunity to refresh all my wireless equipment. After demoing a number of systems, I found the Lectrosonics SMDB/SR series shone above everything else as being light (big consideration when you carry lots of receivers in your mixer bag) and ultimately the most flexible as the duel receiver could be slotted into a broadcast camera to be used as a link. I like that the company has a European Service Centre in the UK (Raycom Limited) and I like how the transmitters can be totally controlled hands free using an iPhone app. No longer do we need to carry a screwdriver, put our hands down a contestant's top or up their backs!”

“A lot of the shows I work on require me to work alongside other recordists and more often than not find they also have taken the Lectrosonics route. With bandwidth available for TV and Film use continually being reduced, it will be interesting to see what Lectrosonics comes up with next.” Bacon concluded.

The new series of The Great British Menu is due to be aired this summer.