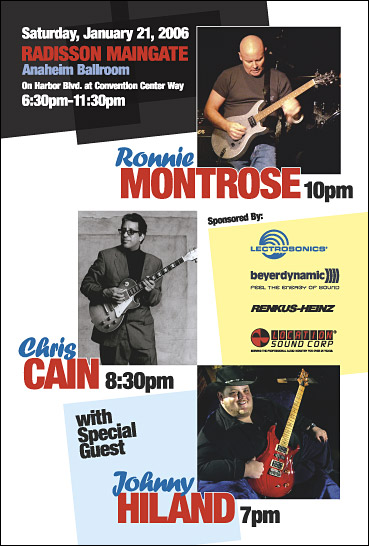 ANAHEIM, CALIFORNIA: Amidst a sea of musical equipment manufacturers, retailers and the very latest in equipment, one of the main highlights of the NAMM show in Anaheim every January is the first-rate talent on display. For guitarists, this year's show will be a special treat because three of today's hottest six-stringers will perform on Saturday, January 21st right across the street from the convention center. Starting at 7:00 p.m., Johnny Hiland will take the stage, followed by Chris Cain and then Ronnie Montrose, all at the Radisson Anaheim Ballroom in the Radisson Hotel on Convention Way.

NAMM favorite Johnny Hiland's playing can be found on records by Randy Travis, Toby Keith and Ricky Skaggs. In fact, Skaggs calls Hiland "the most versatile guitar player I've ever heard." Steve Vai signed Hiland to his own Favored Nations label after hearing a short demo left by Hiland's manager on Vai's voicemail.

At 8:30 p.m. Chris Cain brings his jazz-tinged bluesy guitar sound and B.B. King-style vocals to his enthusiastic audiences. Music critic Larry Nager says, "Cain is forging a unique style. With his own highly personalized songwriting, his album 'Hall Of Shame' is a giant step in the development of one of the most compelling young bluesmen on today's scene."

And at 10:00 p.m. guitar icon Ronnie Montrose will take the stage. Montrose has recorded countless records including those with Herbie Hancock, Van Morrison and Edgar Winter along with a number of his own solo projects.

Passes will be available on a first-come, first-served basis at these exhibitor's booths: Lectrosonics (Hall E, #1206) and Beyerdynamic (Hall A, #6500). Loudspeaker manufacturer Renkus-Heinz and Professional audio retailer Location Sound Corp. are also co-sponsors but will not be exhibiting at the trade show.