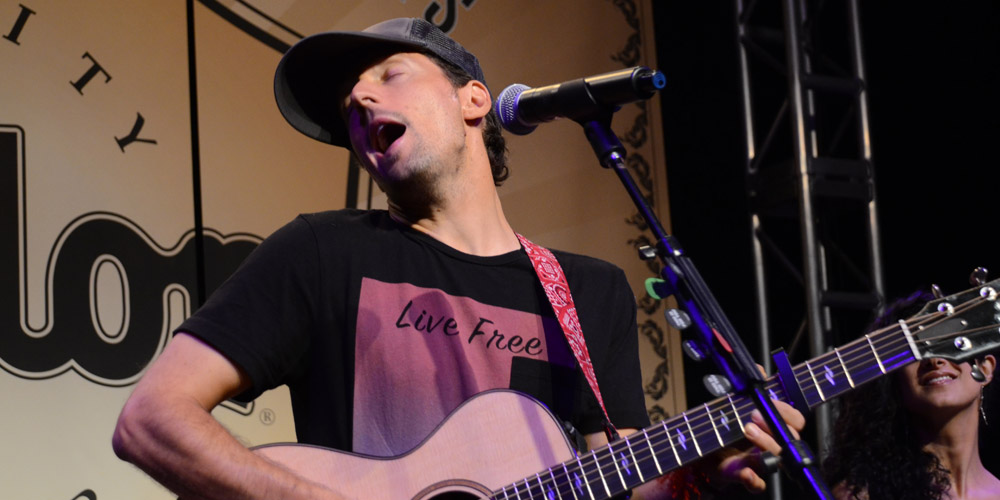 Anaheim, CA (January 22, 2015) — At the annual Winter NAMM Show, Taylor Guitars hosts performances in its demo room on the second floor of the Anaheim Convention Center by an array of eclectic artists who over the years, have included Taylor Swift, Jason Mraz, Coheed & Cambria, Night Ranger, Plain White T’s, Steven Curtis Chapman, Damn Yankees, Barenaked Ladies, Christopher Cross, Johnny Rzeznik (Goo Goo Dolls), and many others. For more than a decade, wireless microphone and instrument systems used on the performance stage, as well as in the guitar manufacturer’s dealer meetings, press conferences and product introductions have been Digital Hybrid Wireless® technology provided by Lectrosonics.

“Wireless systems rule the world. So you have to not only be compatible with them, but you also need to have systems that you can rely on a standard.” says David Hosler, head of applied creativity, new product development and design at Taylor Guitars. “I’ve always recommended Lectrosonics. It’s as close to using a wire as anything I’ve ever used.”

Hosler recalls that the relationship with Lectrosonics began in 2004 with the introduction of Taylor’s ES (Expression System®) series of acoustic instruments, which feature integrated, proprietary electronics, comprising a neck-mounted induction pickup plus two dynamic transducers on the soundboard feeding an on-board preamplifier designed by Rupert Neve. Starting at NAMM in 2005, Taylor has been demonstrating their acoustic instruments with Lectrosonics’ IS400 guitar wireless systems, including the LMa belt pack transmitter and R400a receiver, which has helped ensure delivery of the warm, natural acoustic sound of the instruments to listeners with no degradation of the signal.

Some artists do endorse a particular brand of microphone, of course, “But for anything that we’ve done wirelessly that we’re in charge of, we’ve always used Lectrosonics,” continues Hosler. For vocalists on Taylor’s performance stage at the NAMM Show, this now includes the HH handheld transmitter, which can be topped by a choice of Lectrosonics cardioid condenser capsules or compatible elements from other microphone manufacturers.

Over the years at the NAMM Show, for music performances as well as new product introductions and corporate events, Taylor Guitars has expanded its use of Lectrosonics Digital Hybrid Wireless products to also include Venue modular receivers, SMQV belt pack transmitters and HM172 headworn omnidirectional microphones.

Aaron Hedden, freelance FOH mixer and system tech for Taylor at NAMM during the past several years, added his thoughts about Lectrosonics: "When Nolan Rossi (monitor engineer) and I first heard the HH transmitter with an industry standard head on it, we were impressed with the sound quality. It was like a hard wire mic, only better! We really appreciate having the Lectrosonics gear for Taylor's huge demo room and all the performances at NAMM. It is always nice to know that there won't be any RF problems at our shows."

Lectrosonics Digital Hybrid Wireless technology is also employed by Hosler in the Taylor Guitars lab to test new product designs during development. “Karl Winkler, Lectrosonics’ director of business development, has been a big help to me in determining output levels of pickup systems, and technical details like that,” says Hosler. “We love their gear, and we love working with the company. There’s always been a good relationship between us.”

Taylor Guitars has evolved into one of the world’s leading manufacturers of premium acoustic and electric guitars since being established in 1974 by Bob Taylor and Kurt Listug. Renowned for blending an innovative use of modern technology with a master craftsman's attention to detail, Taylor guitars are widely considered the best sounding and easiest to play in the world. The company pioneered the use of computer technology, lasers and other high-tech tools and machinery. Outstanding playability, flawless craftsmanship, and stunning aesthetics are just a few of the reasons that many of today’s leading musicians make Taylor their guitar of choice. www.taylorguitars.com