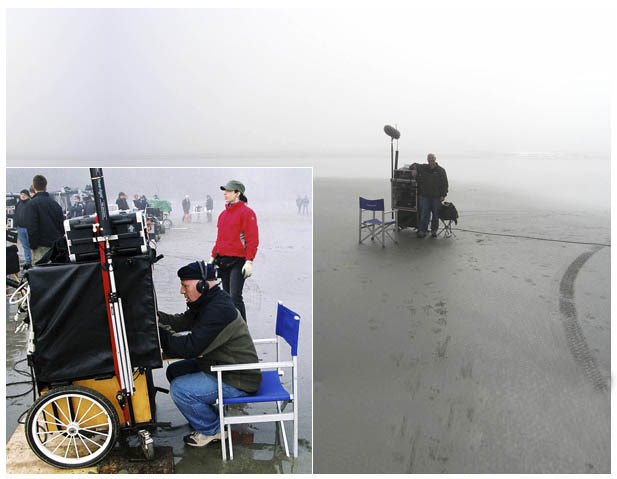 VANCOUVER, BRITISH COLUMBIA: Since 1986, location sound mixer Darren Brisker has enjoyed a successful career on countless sets of both television programs and notable feature films. Most recently, he and his newly updated sound cart ventured off to a Vancouver-area island to record production sound for the film "The Wicker Man," a thriller starring Nicolas Cage slated for release in 2006.

The Wicker Man's island environment could have been a major challenge for Brisker, as it required footage to be shot on large open vistas and up and down massive inclines. But thanks to his Lectrosonics Digital Hybrid Wireless™ microphone system, Brisker didn't chase the action and the actors. He simply stayed put and confidently recorded great production audio.

"We had these big exterior shots," Brisker describes. "The sets were literally hundreds and hundreds of meters square. Needless to say, I was a long way from the action a lot of the time. I've used a full-time wireless boom with Lectrosonics since they came out with their original diversity systems. The benefit of being wireless is that it gives the boom operator the mobility to move around without having to spend valuable time re-cabling. We can respond quite quickly to changing environments, or shots, or lighting, and it allows me to stay out of the way, which is a real benefit on a movie with sets as large as these.

But what about signal reliability over long distances? No worries, insists Brisker. He has come to trust his Digital Hybrid Wireless system enough to work comfortably while others do the roaming. "With Lectrosonics, I always have had rock-solid signal," Brisker says surely. "Being able to work at such long range is a big help, especially for this movie. Without this wireless system, I would have had to waste a lot of time wheeling my 100-pound cart up and down these incredibly long steep hills. Instead, I could just concentrate on how I wanted to get the sound, not where I needed to put my cart to get the sound."

Exactly how far does Brisker stay away from the action, thanks to bulletproof wireless signal integrity? "I'm comfortable working from a range of about a city block to a block and a half," he offers. "However, out on the countryside, I think that we've had ranges of two to three city blocks!"

Brisker's highly capable cart features six of the MM400a transmitters with UCR411 receivers along with a Zaxcom Cameo digital mixer. For recording he uses a brand-spanking-new Apple G4 PowerBook running audio recording software specifically designed for production sound recording called "Metacorder" by Gallery. Gallery is a UK-based pro audio design firm. "Gallery is much like Lectrosonics in a way," offers Brisker. "You can call the guy who runs the company and tell him you have a software improvement idea. If he likes it, you'll probably have the changes within the hour!"

Now having permanently abandoned his DAT machine, Brisker records all production audio with Metacorder, burning DVD-Rs for his dailies. "Unlike the DAT, which was able to record just two tracks at 16 bits, with the PowerBook, I have the ability to record as many tracks as I could ever need, and all in pristine 24-bit." says Brisker. "That's another reason why I went with the Digital Hybrid Wireless models. They eliminate audio companding, allowing for a real 'microphone cable' type of sound."

While the fidelity and reliability of his Lectrosonics gear keeps Brisker loyal as a customer, it is the company's dedication to customer service that keeps him happy. "Lectrosonics is just a fabulous company to deal with," he explains. "I'm always on the phone with Larry (Fisher, company president) asking for hardware or software changes, and they have always accommodated me. They have a really good attitude about it. They know that we, their customers, are all professionals who know what we need and want. As a result, Lectrosonics takes all feedback from their customers very seriously. It means a lot to those of us that are out in the field."

While his job may be highly demanding, which can often result in high pressure on set, Brisker insists that he simply loves his job. "Most of the other people on the set don't have a monitor, certainly don't have headphones, and they really don't know what the cast are saying and how things are going unless they go to see the dailies," he fondly explains. "I listen and watch it all day long, and really get to see it come together as it happens. It's a great job and I wouldn't trade it for the world."