Lectrosonics Wireless Proves Dauntless In Capturing "Life At The Extremes" 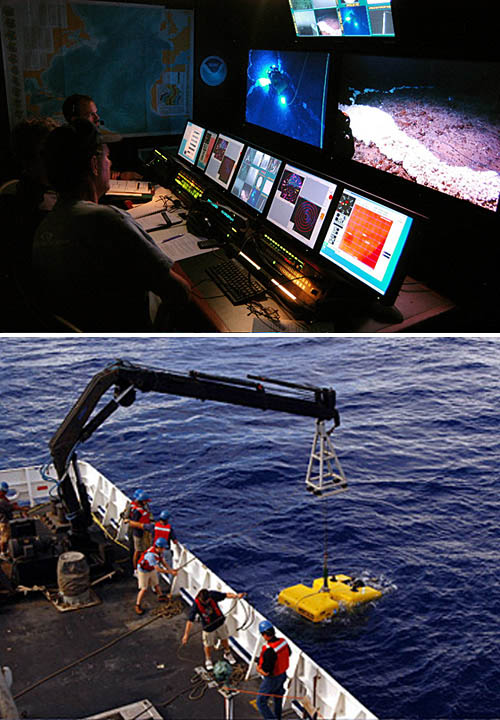 MID-ATLANTIC RIDGE, ATLANTIC OCEAN: 28 years ago, Dr. Robert Ballard discovered the existence of hydrothermal vent fields. Over two decades later, Dr. Deborah Kelley discovered what was dubbed 'the Lost City': wondrous examples of Ballard's discovery located 2,100 feet below the Atlantic Ocean's surface. This year, these two scientists joined forces in presenting a series of live cybercasts to 24 aquariums, museums, science centers, and school districts as well as to twenty Boys & Girls Clubs throughout the United States and Mexico. As a result, many interested viewers were able to witness unseen aquatic and microbial organisms in Immersion Presents' "Life at the Extremes," a series of live half-hour shows airing four times daily.

The Lost City's vent fields - different from previously discovered vents - were captured and broadcast via 'telepresence,' a term coined by Dr. Ballard to explain the expedition's innovative robotic and communicative operations. The scientists viewed the footage recorded with cameras attached to Hercules and Argus, disproportional yet adjoined underwater vehicles dipping down to as deep as 8,000 feet below sea level. Dr. Ballard watched from many feet above on the 'Ronald H. Brown' NOAA ship, while Dr. Kelley observed from a University of Washington command center.

Scot Charles, a location sound mixer, was tapped to wrangle audio for the broadcasts, which involved recording the narration of scientists and special guests, as well as all comments made on the Ronald H. Brown's intricate intercom system. "The job itself was a challenge," Charles explains. "All other things aside, just the fact that we had to get broadcast audio and high-definition video aboard a ship in the mid-Atlantic Ocean was a challenge. Not only did I have to make sure that the on-air talent was wired up and mixed, we had to interface with the intercom system. It was a very unique expedition. I've never been on anything like this before, and probably never will again."

Unlike recording location sound for a traditional television show or a feature film, Charles says that the presence of the film and audio crew was secondary to the main purpose of the event. "What made it most complicated for us was that the mission was first and foremost about science," he continues. "We needed to be unobtrusive. It wasn't like a TV program where the program is the main focus and everyone must cooperate. This was different. These were scientists on a real science expedition and our job was to capture it all without being in the way."

Tough jobs require tough equipment, and for Charles' "Life at the Extremes" gig, that meant using Lectrosonics 205 diversity wireless microphone systems with MM400a transmitters, alongside his trusty Sound Devices location mixer. "The Lectrosonics systems are designed to be rugged and easy to use," Charles insists. "It shows in the way they construct the belt clips and the easy-change battery compartment. The way Lectrosonics designs their stuff may not seem like a big deal when you're sitting in your shop or sitting on a sound stage, but when you're trying to wrangle three or four microphones in a hurry before broadcast time, the ship is pitching and rolling, and there's salt mist floating in, that stuff becomes much more important. Everything must be quick, easy, and reliable."

Charles utilized four Lectrosonics UCR205 receivers, which ran directly to his mixer. The mixer's output feeds were split and sent to a satellite codec and HD recording decks simultaneously. "The signals were coming back live from a big satellite feed," Charles explains. "They went from the ship's site, up to the satellite, and down to the University of Rhode Island where the whole program was directed and switched. There were signals coming from the University of Washington as well. During the live program, they talked back and forth, looked at the images and switched live."

The ship's intercom panel was also utilized. "We would wire into the intercom with a five-pin plug," Charles explains. "The intercom is a 16-toggle switch panel and it literally became a part of the system."

To further complicate audio matters, Dr. Ballard wanted to be anywhere the action was happening on-board, including various labs, as well as the spot where Hercules and Argus were loaded and unloaded. This presented atypical RF and radar interference as well as constant noise to deal with. "We're talking about a ship in the Atlantic Ocean," Charles illustrates. "Moving more than eight feet in reference to the satellites was a big deal. So these thrusters are grinding away to keep the bow and stern in the same position, no matter what the wave situation is. Plus, this ship has complete science labs and Dr. Ballard wanted to do some of the segments there. I had to find a way to get signal all the way to mid-ship, which required dropping tie-lines for the audio and finding the best way to broadcast IFB."

Thanks to thoughtful planning and bulletproof, water-resistant interference-bucking audio equipment, the "Life at the Extremes" was an extreme success. And for Charles, his gig eventually became easy enough to manage that he was able to enjoy the uniqueness of the show's environment and subject matter. "Once things settled down, it actually became a lot of fun," Charles fondly recalls. "I was then able to record the program and listen to content. I could focus on what they were actually saying. It was a great experience."