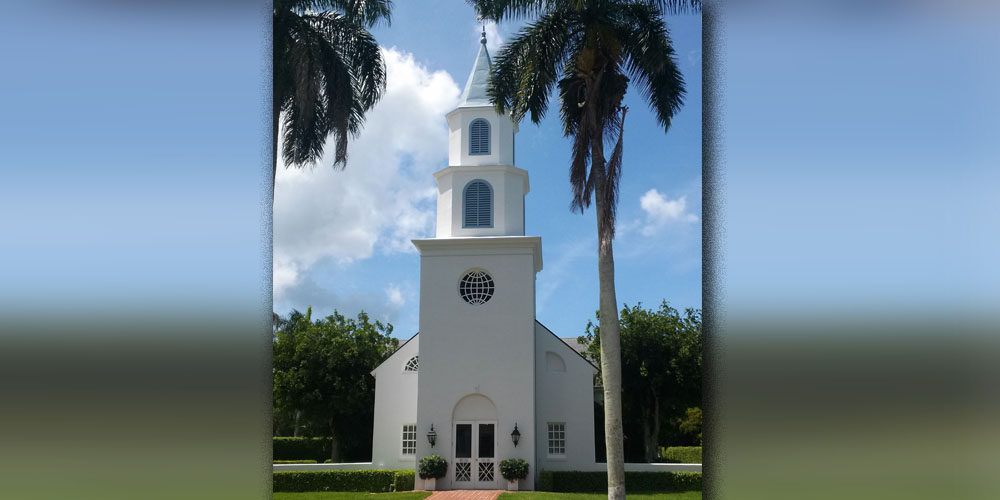 Naples, FL – October, 2014… With a history dating back to 1949—when worship services were held on the porch of the original Naples Beach Hotel— Trinity-by-the-Cove Episcopal Church is a small, beautifully maintained and picturesque house of worship originally designed by Palm Beach architect Howard Major. The church recently completed a significant renovation that includes a substantial upgrade of the sound reinforcement system in the sanctuary. And at the heart of that new system is Aspen Series signal processing drawn from the catalog of Rio Rancho, NM-based Lectrosonics.

Chicago, IL-based Kirkegaard Associates (“KA”), which provides consulting services in architectural acoustics, noise control, and audio-video systems, was contracted to evaluate and, ultimately provide recommendations for AV and acoustic improvement at the church. Jonathan Darling, Senior Consultant at KA, served as both the AV system designer and project manager. John Fenstermaker, Director of Music at Trinity-by-the-Cove, worked closely with Darling on the upgraded sound system, and Chris Burney of Naples, FL-based Scientific Sound handled the installation. Darling discussed the various considerations that ultimately resulted in the selection of the Lectrosonics Aspen SPN1612 audio processor.

“Trinity-by-the-Cove is an absolutely beautiful structure,” Darling reports. “The church is subtly cruciform in design with small transepts on either side of the nave seating. The church includes a wonderful organ and services feature a fine small choir. We chose the Aspen SPN1612 processor because of Lectrosonics’ reputation for superior sound quality, its ability to handle all system connections in one DSP unit, its input capability, and because of its ability to be controlled via an Apple iPad.

Scientific Sound’s Chris Burney added, “The Lectrosonics Aspen was our first choice because of dependability. Scientific Sound Systems has been using Lectrosonics for many years and they are always our go-to processing system for automatic mixers. The open-ended architecture, processing, and audio quality the unit provides is wonderful. We had used the Aspen processors in previous installs—controlling them with IR/serial touch panels in much of the same way as we did at Trinity-by-the- Cove. When it came time for the Trinity-by-the- Cove project, we were delighted that Lectrosonics had developed the ability to use iPads as controllers”.

“The ability to provide direct iPad control of the processor was a feature that was of particular importance,” Darling said. “This feature enabled us to remove a third-party control system with a significant reduction of project cost for control equipment and programming. There are actually two iPad controllers in the system—one portable and one wall-mounted in the sacristy. This dual-control feature was actually custom programmed by Lectrosonics, which they were very helpful in providing.”

The Lectrosonics Aspen SPN1612 audio processor features 16 inputs and 12 outputs in a 2RU form factor. With ultra-low noise input preamps, a full crosspoint matrix with 48 outputs, TCP/IP Ethernet addressability, and ultra-low latency among its many attributes, this processor is able to provide seamless auto-mixing and integration with echo cancellation, analog mixing consoles, and many other types of audio system components. With its numerous capabilities, quality technical support is crucial should questions arise during system programming or installation. In this regard, Lectrosonics’ technical support services proved highly beneficial on this project.

“I had a very positive experience with Lectrosonics’ technical support services,” Darling says. “The company’s willingness to provide programming that would keep the two iPads synchronized—which was not originally provided by the product—proved integral to the success of this project.”

The Trinity-by-the-Cove project was completed in January 2014 and, since that time, Darling reports the new sound system and the performance of the Lectrosonics Aspen processor have been well received. “Everyone was extremely pleased with the functionality, convenience, and sound quality of the Aspen processor,” he said. “The speech intelligibility in the church was significantly enhanced by a competitively priced renovation that was aided by the quality and cost savings provided by the Aspen processor using the iPad control option. The new system has been a win-win for all involved.”

Scientific Sound’s Chris Burney was equally enthusiastic of the project’s outcome, “With the success of the Trinity-by-the-Cove dual IPad control project in the books, our designer Kurtis August has designed and is installing another system—this one with two ASPEN SPN2412’s and dual IPad control for the local government boardroom. It’s an exceptional processor.”