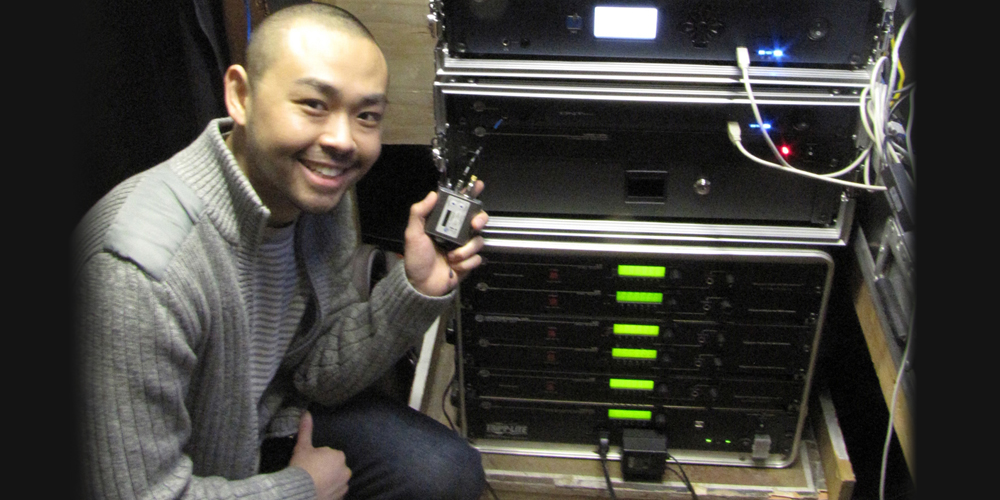 San Francisco, CA – June, 2014… The Color Purple is an inspiring family saga that tells the unforgettable story of Celie, a downtrodden woman who –through love – finds the strength to triumph over adversity and find her unique voice in the world. The musical adaptation of Alice Walker’s award winning novel and landmark film by director Steven Spielberg comes to vivid life on the stage. Set to a moving score featuring jazz, ragtime, gospel, and blues, The Color Purple is a story of hope, a tribute to the healing power of love, and a celebration of life. Helping to ensure the very best possible audio delivery, the technical crew behind the scenes deployed a combination of wireless microphone, DSP, and audio networking technology from Rio Rancho, NM-based Lectrosonics.

Sound Designer Alan Chang of San Francisco, CA-based Coral Canopy, an audio production services company that operates the broadcast, theatrical, and special events markets, was brought in to serve as the sound designer and mix engineer for the Hillbarn Theatre’s production of The Color Purple, which ran May 1st through June 8th. He discussed his involvement in the production and his reasons for deploying a wide range of Lectrosonics products.

For wireless microphones on this production, Chang deployed a combination of twenty-three Lectrosonics SMV and SMQV Super Miniature beltpack transmitters as well as LMa beltpack models. On the receiving end, he utilized five fully stocked Lectrosonics Venue receivers outfitted with a combination of VRS and VRT receiver modules configured for Narrowband, Wideband Mid, and Wideband Low performance. Additionally, a Lectrosonics UMC16B UHF Multi-Coupler was used for RF antenna distribution. This equipment was used in conjunction with DPA 4061 and Countryman B3 microphones.

Chang shared his reasons for deploying Lectrosonics wireless microphone technology. “The Color Purple is a 3+ hour-long musical, which entails very precise battery management that no other manufacturer offers,” he explained. “One such example is Lectrosonics’ remote capability to sleep the transmitters for battery conservation by playing a series of tones and beeps from the RM Remote or from the LectroRM app on a smartphone. In addition to the sleep capability, the RM remote and LectroRM have the capability to change audio gain levels, frequency channels, RF power levels, and locking features. This is a tremendous amount of capability that is particularly useful in theatrical environments where you don’t want to disrupt wardrobe.”

For signal management, Chang used a Lectrosonics Aspen Series SPN1612 16-in / 12-out digital signal processor to handle the majority of the music and vocal performances plus some sound effects cues. He also placed a Lectrosonics DM812 8-in / 12-out Digital Automatic Matrix Processor into service, which he specifically used for the sound-effects driven loudspeakers. Further, he used a Lectrosonics DNT0212 Dante™ network processor. This unit handled sound-effect playback through two networked computers (an Apple MacBook Air and a Mac Mini) and provided reverb processing and enhancement for the vocals.

When queried about Lectrosonics audio processing systems, Chang was quick to share his enthusiasm for the company’s Aspen Series processors. “With the Aspen processors, the amount of internal mix busses that one is able to create is very impressive,” he said. “I also really like the unit’s flexible internal matrix routing capability that enables a sound designer to create interesting and artistic sound system design.”

Before shifting his focus back to his work, Chang offered these parting thoughts, “We needed to specify a sound-friendly system design for The Color Purple that enabled us to have networked computers controlling sound effects cues as well as system management. The Lectrosonics ASPEN and DM processors were ideal for this purpose and Lectrosonics technical support services were great in their ability to assist us. Between the power of the Lectrosonics audio processing systems and the sound quality and versatility of the company’s wireless microphone systems, we created a setup that sounded terrific and delivered without any dropouts or hiccups. Everything proceeded very smoothly. With the use of Lectrosonics gear, we’ve been able to help this production deliver its very best.”

The Hillbarn Theatre’s production of The Color Purple was directed by Lee Foster with musical direction by Greg Sudmeier and choreography by Jayne Zaban. For additional information about the Hillbarn Theatre, visit www.hillbarntheatre.mcjr.net. To learn more about the services of Coral Canopy, go to www.coralcanopy.com.