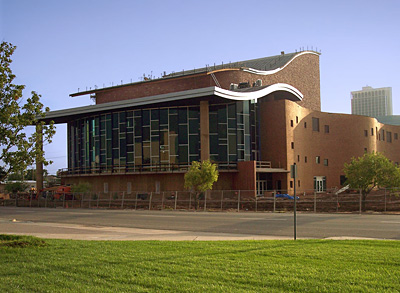 AMARILLO, TEXAS: For many in the operatic world, using vocal microphones for live performances is at worst viewed as a no-no, and at best, a necessary evil. Citing the numerous challenges of performing in an unflattering acoustic environment, Jim Elliott, technical director for the Amarillo Opera in Amarillo, Texas, has miked opera singers, but always quite regretfully. Finally, Elliott felt that it was due time for "a better solution" than their well-worn and 15-year-old Telex wireless microphone systems.

"The most important thing to know about opera is that it and microphones don't mix," explains Elliott, laughing. "It's an insult to most opera singers if you put a microphone on them - it's something that's just not done very often. Our problem is that we currently perform in a venue that seats 2,400 people and doesn't have a balcony. It's a long, flat room, and there are some definite dead spots. Even the best opera singer cannot fill that hall because of the acoustics. For the last ten years, we've 'sweetened' the sound of opera singers by miking them. The great thing about all of that is that we're getting ready to move into a venue where we won't have to do that anymore. But in the meantime, we needed a better solution."

So Elliott began his search for a well-built and unobtrusive wireless microphone system, something that would also offer superior frequency agility. "We now perform in a civic center, which has a coliseum right across the hallway," illustrates Elliott. "There are also two banquet and two exhibit halls in the building. With the coliseum hosting tractor pulls, hockey, and indoor football, we're always running up against strange frequencies. We needed a product that would search for frequencies and helped us re-assign quickly. With the help of Kyle McMenamin of Pro AV Texas, we found the Lectrosonics Venue System. After seeing local, Paramount Terrace Christian Church use it, and with just a little more research on our part, I knew the Venue was what we needed."

Pro AV Texas' McMenamin has been a fan of Lectrosonics gear for quite some time, a fact that allowed him to confidently recommend the Venue system to Elliott and the Amarillo Opera. "I can't speak highly enough of the Lectrosonics Venue," McMenamin offers. "Jim had been looking for a new wireless system, and I priced a Lectrosonics that actually beat the price of a much lesser system. He was gracious enough to give me the bid, and after using it, he felt that it was the greatest wireless system in the world. They had no more wireless problems."

The Amarillo Opera chose to purchase ten channels of the Lectrosonics Venue Receiver system in two chassis - one with six modules, and one with four. Citing "invisibility" as a clear perk, Elliott completed the wireless system package with Countryman IsoMax E6 EarSet microphones and the compact Digital Hybrid Wireless™ LM transmitter beltpacks.

To ease transport for the Amarillo Opera's numerous location events, the Venue units reside in a rack-mounted and castered road case with on-board distro system. "We're also going to use the Lectrosonics system with our outreach teams," explains Elliott. "They perform in schools all over the Texas panhandle and needed a small PA system for traveling." The portable PA - also configured by Pro AV Texas - features a 12-channel Soundcraft Spirit mixing console, a dbx DSP processor, and JBL Eon loudspeakers.

As the Amarillo Opera completes a production of "Beauty and the Beast" and prepares for a fall production of "Hansel and Gretel," Elliott finally feels confident with his chosen microphone wireless system. "Having the small beltpacks and smaller microphones will be great for all the action involved in 'Hansel and Gretel,'" says Elliott with eager anticipation. "In the spring, we move into a brand new hall and I hope that we don't need to use the microphones there. But if we do..."