"Pedal To The Metal" Captured With Lectrosonics Wireless Technology 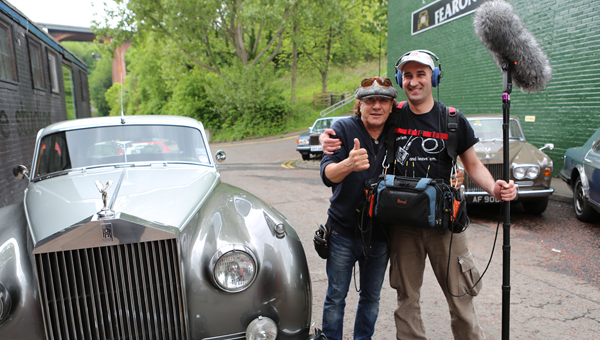 London, England – March 2014… When your job is to capture the sound of cars, the ability to adapt quickly and accurately to the demands of the shoot is central to keeping production on track. If you miss the roar of the engine as the car passes the camera, you’ll likely end up looking for a new project! Such are the challenges of George - Aris Anastassopoulos, one of the location sound engineers for Back2Back Productions’ Pedal to the Metal, an upcoming TV show for the Discovery Channel featuring AC/DC’s Brian Johnson as host. This is challenging work with little margin for error. That’s why Anastassopoulos uses Digital Hybrid Wireless® microphone technology from Rio Rancho, NM-based Lectrosonics.

Anastassopoulos, known as Aris among his industry peers, has been working in professional audio for better than fifteen years—starting as a recording engineer for classical and orchestral recordings in addition to handling live sound reinforcement for open air festivals as well as surround sound system installations. His location sound work has taken him to Germany, Spain, Italy, Brussels and the Greek islands for fourteen feature films, commercials, TV shows, and documentaries. His credits include PBS’s The Cooking Odyssey and DOS, a feature film shot in Athens, Greece and Barcelona, Spain, which won the Best International Feature Film & Audience Award at the 2011 New York Independent Film Festival. He discussed his work on Pedal to the Metal.

“Pedal to the Metal showcases Brian’s expertise on specialty cars and driving and also gives viewers a glimpse at his personal life when he’s not performing on stage,” Aris explained, “so there’s a wide range of shooting scenarios. For this project, I’ve been using Lectrosonics SMB single battery and SMDB dual battery transmitters as well as an HM plug-on transmitter. On the receiving end, I use two SRb dual channel slot mount ENG receivers outfitted with the Lectrosonics Quadpack power and audio interface. I also use the Lectro RM app for Apple’s iOS-based smartphones and tablets, which lets me adjust transmitter level, change frequencies, or just put the unit into sleep mode.”

“I’ve been working with Lectrosonics gear for about one year and I’ve become very fond of the equipment,” Aris continued. “The sound quality is excellent and nothing beats the rugged build quality. The transmitters’ Safety Combo Menu Locks offer protection from accidental menu selection and their backlit LCDs are a godsend during night shoots and in other low light conditions. I also love the fact that the HM plug-on transmitter is a great tool for wireless boom operation and for 48V phantom feeds.”

When queried about issues such as frequency agility, signal reception, and other wireless challenges he encounters, Aris offered the following. “Lectrosonics’ RF Scan and precise RF tuning steps add a great deal to RF agility and make the system very flexible and versatile in crowded RF environments,” he said. “These features make the company’s equipment very well suited for use in the UK, which has the world’s most crammed PMSE RF block (Block 606). Further, being able to use the receivers in true diversity mode or as dual single receivers is extremely useful. For one specific shoot, there was a lot of on-the-fly improvisations and a lot of unexpected performances—requiring on the fly decision making and flexibility from the crew. Being able to accurately monitor the receivers’ antenna reception strength provided considerable peace of mind and enabled strategic placement of my receivers for the best possible reception.”

For anyone working in TV and film, responsive and capable technical support services are essential. Here, too, Aris was very complimentary of Lectrosonics. “Lectro’s customer support and service is second to none,” he reports. “From customer support to calling the factory, getting in touch with Lectrosonics has always been straight forward. Everyone I’ve come in touch has been easy to approach—always taking the extra mile to answer my queries and support me.”

Before turning his attention to preparation for another day’s work, Aris offered these parting thoughts, “Lectrosonics build quality gives me peace of mind for what is unquestionably one of the most important chains of the location sound engineer’s setup—radio systems. Their constant upgrades and tweaks on the SRb means the company is constantly fine-tuning their product, improving the unit’s performance and value, and at the same time making it even more future proof. I’m very happy that I made the switch to Lectrosonics.”

For additional information about George - Aris Anastassopoulos, visit him online at http://www.imdb.com/name/nm3193091/ or www.soundforfilms.com.