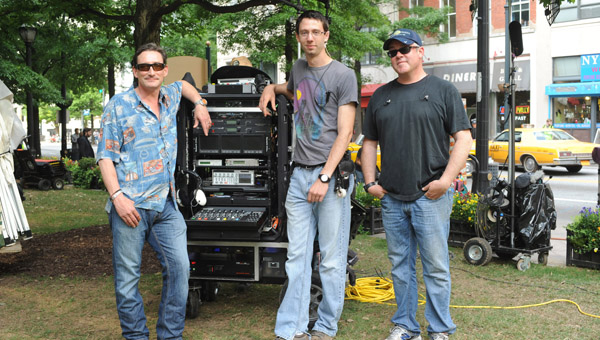 Atlanta, GA… With the 70's behind him, San Diego's top rated newsman, Ron Burgundy (played by Will Ferrell), recently returned to the news desk in Paramount Pictures’ Anchorman 2 The Legend Continues. Also back for more were Ron's co-anchor and wife, Veronica Corningstone, weather man Brick Tamland, man on the street Brian Fantana, and sports guy Champ Kind—all of whom never make it easy to stay classy. The film gets pretty wild and, to ensure the humor was delivered with crystal clarity, audio was captured using Digital Hybrid Wireless® technology from Rio Rancho, NM-based Lectrosonics.

Atlanta, GA-based Production Sound Mixer Whit Norris, CAS, was tasked with capturing location sound for the film. With a pedigree that spans twenty-five years, Norris’ background encompasses industrials, documentaries, commercials, independent films, and episodic television in addition to his work on feature films such as the comedies Dogma and Jay and Silent Bob Strike Back as well as Fast 5, the fifth installment of the Fast and Furious action franchise. For Anchorman 2 The Legend Continues, Norris used a sizeable amount of Lectrosonics gear, including six SMQV and four SMa Super-Miniature transmitters, and two UM400 bodypack transmitters. On the receiving end, his setup consisted of two Venue mainframe receiver systems—each fully stocked with six VRT receiver modules—as well as three UCR411a compact receivers. He discussed the project and his use of the Lectrosonics equipment.

“In addition to our primary Lectrosonics setup,” Norris explained, “we also used an HM plug-on transmitter with a push to talk microphone and a UCR411 receiver attached to a portable loudspeaker. This served as our VOG (Voice of God, communication between the director and cast) for director Adam McKay. And for my team, which consisted of Doug Cameron, Boom Operator and Dana Simmons, 2nd Boom/Sound Utility, we used Lectrosonics R1 and R1A IFB receivers for our private communication and monitoring along with an IFB T4 transmitter.”

When queried about the various attributes of the Lectrosonics equipment that make it so well suited to his type of work, Norris offered the following. “First and foremost is audio quality,” he said, “and in this regard, the Lectrosonics gear is top notch. Secondly, the build quality is terrific: the SMa and SMQV transmitters are really solid. I’ve also been very impressed with the equipment’s easy-to-use design. Both the transmitters and the Venue receivers are very easy to operate.”

“Range is another important consideration,” he added. “Dropout-free performance is critically important and distance is always a concern for someone in my line of work. In my experience, the Lectrosonics equipment has better overall distance capability than other wireless systems I’ve used. I also like the fact that with either the Lectrosonics RM remote or the Lectro RM app for Apple’s iOS, I have the ability to adjust transmitter level, change frequency, or just put the units into sleep mode. It’s really handy so that you don’t have to disrupt an actor’s wardrobe.”

With a film like Anchorman 2 The Legend Continues, one never knows what surprise lines may occur that really help a comedy deliver the laughs. For Norris, capturing everything is critically important. “These days, when you’re filming comedies like Anchorman 2, there are always two to three cameras to cover the many adlibs that occur when you have a cast this creative,” he reports. “No one wants to miss a performance or line. Even with multiple booms, you may not capture every line unless you’re miking and tracking everyone. This is what Lectrosonics wireless helps me do—keep everyone miked! As a sound department, I consider our main job is to capture each and every performance. Giving the post production staff options really helps them in terms of cutting the dialog.”

Before shifting his focus to an upcoming project, Norris offered these final thoughts, “I have been very pleased to have owned and operated Lectrosonics products for over 20 years. Everything about Lectrosonics is first rate. The company’s customer service and support is outstanding. They are always listening to their customers, which I think is very important. I really enjoy the great sense of humor the company has, such as those crazy April Fools’ announcements they always seem to come up with. Overall, I believe they have been very supportive to the sound for picture community. My experience with the company has been great and I’m looking forward to the future with Lectrosonics.”

To learn more about the services of Whit Norris, contact him via email at This email address is being protected from spambots. You need JavaScript enabled to view it..