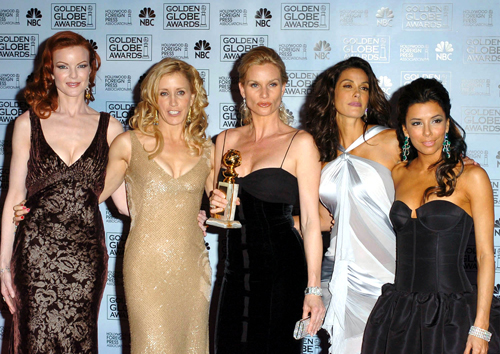 LOS ANGELES, CALIFORNIA: How does one go about putting a wireless microphone transmitter on a desperate housewife? "Quickly and accurately" according to Agamemnon Adrianos, the production sound mixer for the hit series "Desperate Housewives." And the wireless transmitter adopted by Adrianos for use on the show's lead characters is the recently introduced SM from Lectrosonics. The SM (for "Super Mini") is ideal for professionals desiring an incredibly high-powered, cost-effective and compandor-free wireless transmitter in a remarkably tiny and splash-proof package. No stranger to wireless technology, Adrianos has worked as a production sound mixer for television, movies and documentaries for the past 33 years.

Adrianos was intrigued with the SM from the first moment he saw the prototype at NAB 2004. "I got very excited about it because of potential production applications due to the very small size" he relates. "On a movie set or on location, speed is important... and anything to make our job go faster is key. At the same time, size is very important because of practicality. So when they finally offered me a unit for beta testing on the show, I told them that I can't just show up with one of these things - the other actresses will all want one, too. I'll need enough for all of them right away!"

Adrianos describes the particular challenges faced on the show. "Women's wardrobes are becoming scantier than ever thus it's always difficult hiding transmitters. With the SM, once they are set up it's very quick for us to get them on and off the actors as well as hide them in, ahem, places where they are not seen on camera. This product gives us a clear advantage in terms of invisibility." The small size and light weight were important factors in one specific shoot. "In the last episode, there was a scene where the guys get into a fight in a rock quarry. Normally, larger transmitters would have a tendency to shift or come loose in an active scene like this. But with the SM, it was not a problem. We were under pretty difficult conditions; outside and a good distance away because of the wide shots, but they performed great!"

Adrianos is also pleased with the compatibility modes offered in the SM. "The emulation factor - that the transmitter can work with any of the Lectrosonics receivers - makes it very versatile for people who have the different series. I have UCR205s and UCR195s, which are a little older, and I was able to dial the SM right in. It worked immediately with my receivers and sounded great."

One further thing noted by Adrianos is the support given by the manufacturer. "Lectrosonics has been tremendous. I always have the ability to call them for full technical support or any issue from their engineering staff, either through email or on the phone. And typically when radio mics are used, I use Lectrosonics - I've always used them. And the SM is a winner in my book!