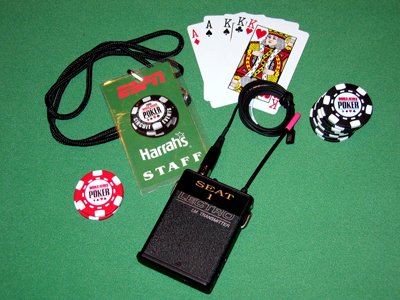 LAS VEGAS, NEVADA: Since its inaugural event in 1970, the World Series of Poker, which will be hosted in June by Harrah's Rio Suite Hotel and Casino, has evolved into a hugely popular sporting event worthy of its ambitious moniker. As a result, ESPN has greatly benefited by the widespread appeal of this burgeoning gaming competition and is currently preparing to air coverage of the 2005 WSOP tournament, held June 2-15.

For Tony Kremer, principal engineer and founder of Kinetic Productions Las Vegas, the World Series of Poker is one of the more enjoyable location recording events. "I work on the Olympics for NBC and have a wide range of other sports clients, such as Championship Boxing for both Showtime and HBO," explains Kremer, who launched Kinetic in 1990. "Obviously, this is not a physically active sport like most you see and hear on television. It's, well, a bunch of people sitting down at a table to play a game of poker! But it does require intense mental skill and stamina."

The intimate, subdued drama of a broadcast event such as the World Series of Poker essentially demands superb location sound. "There is no second chance," explains Kremer. "In terms of actual game play on the table, what happens is what happens, and we've got to get it. If somebody mutters something clever or interesting, ESPN wants it to be there on tape. It's got to be as clean and clear as possible with no breakups or hiss."

Realizing this, Kremer chose to record all current and future WSOP events using the Lectrosonics Venue Series of receivers along with LM Digital Hybrid Wireless(tm) transmitters and Countryman EMW lavaliers. According to Kremer, Kinetic Productions' mobile recording rig greatly benefits from the ergonomics for which the Venue Series has become quickly and deservedly known. "I've had great experiences using all of the Lectrosonics ENG stuff," recalls Kremer. "Lectrosonics is well known for reliability and durability. Their transmitters are made of machined aluminum, and they take a pounding in the field while always working strong. Last year, Lectrosonics' Gordon Moore showed me a prototype for the Venue receiver, which really interested me. At the time, I realized that I was going to start doing more reality-type television programming where multiple microphones would be required in a very small amount of space. After seeing the Venue receiver, I knew it would fit this application nicely." 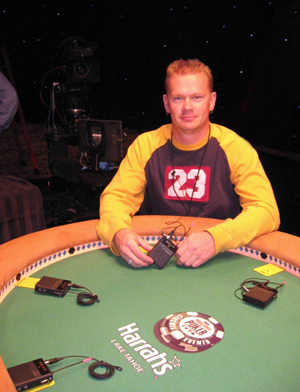 The Venue's DSP compatibility modes, in addition to the Digital Hybrid Wireless mode, allow backwards-compatibility with all Lectrosonics analog wireless systems and certain models from other manufacturers. For Kremer, this was an especially attractive feature. "With the exception of older VHF stuff, the Venue worked with the existing transmitters that I already had," Kremer explains. "That was an interesting benefit of which we are just now starting to take advantage. We had some Sennheiser handheld microphones that we wanted to use with the Venue Receiver, and after testing them, we found that they worked great."

For recording WSOP events, Kremer and sidekick Alan Strusser, record all production audio - ten player mics, two dealer mics, a PA feed and a hardwired stereo effects mic - to two sync'd TASCAM DA-88 machines via a Mackie 1604 VLZ mixer. "The Mackie is used for the reference mix," explains Kremer. "The receivers plug into the Mackie. Then we take the preamp outputs straight to tape. Our configuration uses two Venue receivers and a total of twelve wireless units. At any given time, we can have anywhere up to ten players at the table. We also pre-wire a second dealer because dealers are always changing out, and both dealer mics are always being printed to DA-88."

The addition of the Lectrosonics Venue receiver to Kinetic Productions' mobile rig has also physically lightened Kremer's load. "Suddenly I could fit six receivers in one rack space," Kremer explains. "The Venue has the features I need to do multi-channel wireless without additional bulk. It's not just six receivers. It's six receivers, plus an antenna multi-coupler with looping outputs. That's a great advantage because we only need one set of antennas to feed all twelve receivers instead of a separate antennas, multi-couplers, etc. The Venue receiver has everything I need in one package. It even has a spectrum analyzer built in."