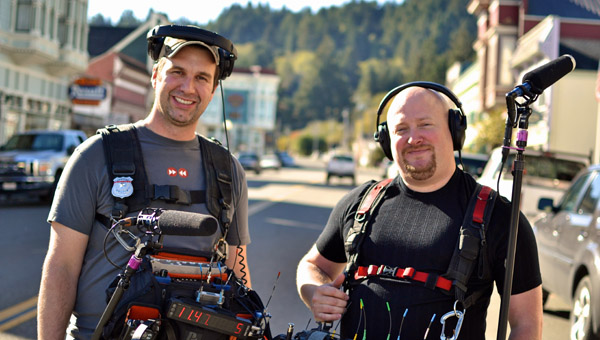 Minneapolis, MN – December 2013… Airing on the Food Network, Diners, Drive-Ins and Dives features a ‘road trip’ concept where show host Guy Fieri travels around North America looking for the best made-from-scratch food in diners, drive-ins, and dive bars. In each city, the show visits multiple locations—frequently on the same day. Hence, the show’s production crew needs to be nimble and ready for just about anything. This is precisely why the location sound operators rely on their arsenal of Digital Hybrid Wireless® microphone technology from Rio Rancho, NM-based Lectrosonics.

Jeff Asell and David Canada are senior sound engineers for Minneapolis-based production house Match/Cut Productions while Canada is also a founding partner. Asell’s background includes freelance work for the network news divisions of both ABC and CBS while Canada’s work history includes projects for ESPN as well as the ABC and CBS news divisions. With their collective experience in news production, they are well suited for the ‘on-the-go’ nature of production that Diners, Drive-Ins and Dives involves.

Production for the show frequently has as many as three shooting locations on any given day. To accommodate this hectic schedule, Asell and Canada typically split into two crews. “This approach enables one crew to be in route to and setting up for a shoot while the other crew is on location at the currently active site,” Asell explained.

In addition to Lectrosonics’ acclaimed audio performance, both Asell and Canada find the equipment’s build quality and RF agility to be exceptional. “Kitchens are hostile environments,” says Asell. “There’s heat, humidity, and vaporized oils in the air. The SM and SR series transmitters and receivers are fantastic for this application because they are well protected from moisture, which is routinely encountered in the kitchen. And when traveling all across North America, frequency agility is necessary. The RF environment can be significantly different from one side of town to the other, or from one coast to the next. Our Lectrosonics gear makes it easy to identify available frequencies and lock them in.”

“Going wireless also keeps our gear and personnel safe,” Asell continued. “We do fully wireless setups most often, as XLRs and slippery floors are a bad combination. Nobody wants a boom mic getting knocked into a 350 degree fryer or somebody slipping. Being able to wirelessly boom gives our crew and our chefs fewer obstacles to dodge in a typically small kitchen—and this is before we add lights, monitors, and so forth. It is always a challenge getting the best quality sound in these loud kitchens where most everything makes a noise, so starting with Lectrosonics gear and its fantastic sound quality helps us to continually succeed.”

The compact form factor present in much of the Lectrosonics product line is yet another consideration that figures prominently into the equation. “I prefer a smaller bag in these environments,” Canada reports. “The smaller bag is more maneuverable and saves one’s back after a week of being in the field. I use a Sound Devices 744t in a compact bag, so having gear that takes up little room is advantageous. Using the SR receiver units not only cut down on the footprint in the bag, it also cuts down on power consumption. The D4 system is one transmitter that is doing the job of three. Without the D4, I would need three transmitters, two for the left and right channel camera feeds plus another transmitter for IFB. The D4 system drops this to only one transmitter. Using an Ambient Recording VPAKII allows me to power everything in my bag without another more bulky system. It makes for a sweet little rig.”

With a good twenty-eight years of Lectrosonics experience among them, Asell and Canada expect to use Lectrosonics for every project they encounter. “I am convinced that I will always have Lectrosonics in my bag,” says Asell. “Lectrosonics has proven to me time and again that they sound great even under the worst conditions. With all of the elements in location sound recording that one can’t control, it’s great to have gear that is rugged, reliable, innovative, and capable. It’s no coincidence these important qualities that Lectrosonics builds into their gear are also the qualities that make a successful audio engineer.”

To learn more about Match/Cut Productions, visit the company website at www.matchcut.tv.