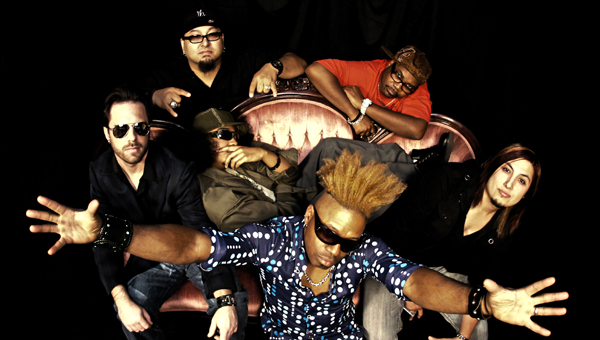 Las Vegas. NV – December 2013… Six-time Grammy considered funk band and InGrooves recording artist, The James Douglas Show, consisting of James Douglas (lead vocals), Mike Cee (keyboards, vocals), Zach Fowler (bass, vocals), Marco Nunez (drums, vocals), Delmone Taylor (saxophones, EWI, keyboards, vocals), and Jessie Martinez (lead guitar) recently completed production of their new video, Vegas Hot. Set in Sin City, the video draws upon the party hard, let-it-all-go mentality that Las Vegas is known for.  During the video’s shoot, the producers of SyFy Network’s Naked Vegas TV show crossed paths with the band and were so impressed with what they saw that they asked to incorporate a segment into their show—and it all came together with the use of Digital Hybrid Wireless technology from Rio Rancho, NM-based Lectrosonics.

Drummer and band leader Marco Nunez reports that the James Douglas Show is a regular user of Lectrosonics equipment. “We use Lectrosonics wireless gear for everything we do,” says Nunez. “We work with three custom finished HH handheld transmitters, the IS400 wireless beltpack instrument system is used by Zach, Jesse, and Delmone, and the Quadra IEM system, which handles our in-ear monitoring, includes three M4T transmitters and five M4R receivers. Lectrosonics gear has extreme range and clarity. You can go outside most venues and still not experience any compromised sound quality. Equally important, the Lectrosonics gear is built really tough. We’ve played over 1000 shows and have never had anything break. It is truly the best wireless equipment in the business.”

During the making of Vegas Hot, the band’s Lectrosonics gear was seemingly everywhere and this attracted the attention of the Naked Vegas crew. “When we arrived on set for the filming of our video, the crew of Naked Vegas noticed that all our wireless gear was Lectrosonics. I told the sound guy that we used Lectrosonics exclusively and he simply said, ‘It’s the best.’ That made me feel great! It’s always good to know you’re using a product that the whole industry holds in such high esteem. All these pros can’t be wrong!”

The use of the Lectrosonics Quadra IEM system is particularly important to the band. The equipment’s operation is fast and intuitive, and this makes the Quadra a hit with everyone, as James Douglas, the band’s lead vocalist, reports, “The sound of the Quadra is amazing. You simply have to hear this system to fully appreciate it. It’s like having a conversation with a friend, but in stereo. There’s no struggling to hear clearly at all—the sound comes to you, as opposed to trying to force the issue as with other systems. Secondly, the build quality is terrific. The weight of the unit conveys a solid feel and it looks beautiful. The machine work is phenomenal. This unit has changed my life in terms of how we approach live performances.”

The James Douglas Show brings a vibrant fusion of their signature “Funk-n-Soul-n-Rock & Roll” flavor to everything they do. Nowhere is this signature trait more visible than in Vegas Hot and the segment that appears in Naked Vegas. The episode that includes the James Douglas Show segment is titled Devil Pirates and Aliens. It aired on November 5th and is now available via video on demand. Vegas Hot can be viewed on YouTube at http://www.youtube.com/watch?v=K9wRLQQWWwI and is also available on Vevo (www.vevo.com).

Before shifting his attention back to the business of the band’s upcoming appearances, Nunez offered these parting thoughts, “We couldn’t be happier with our Lectrosonics gear. It always works and it’s easy to use. We can count on this equipment every time—we just turn it on and go. As to all the thought and technology that goes into the equipment, we leave that to the folks at Lectrosonics!”