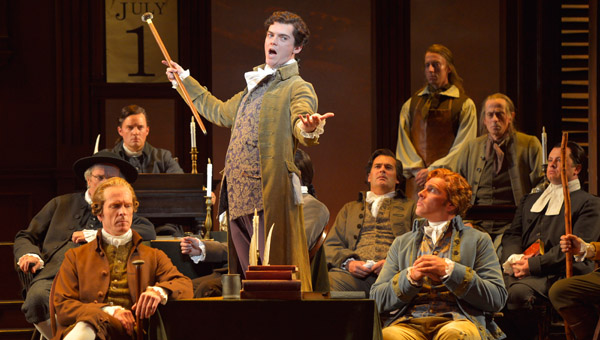 San Francisco, CA – October 2013… Based on a book by Peter Stone and featuring music and lyrics by Sherman Edwards, 1776 is a musical that draws on the events surrounding the creation and signing of our country’s Declaration of Independence. While the show focuses on events dating back some 237 years, there was nothing ‘historical’ about the American Conservatory Theater’s (ACT) audio attributes. That’s because state-of-the-art Digital Hybrid Wireless® microphone technology from Rio Rancho, NM-based Lectrosonics was utilized.

St. Petersburg, FL-based sound designer Kevin Kennedy was contracted to coordinate sound for the American Conservatory Theater’s presentation of 1776. With a comprehensive, 20+ year audio background that spans everything from designing audio systems and mixing for touring Broadway musicals to mixing rock acts such as Alan Parsons, Kennedy is well versed in the sound reinforcement challenges of contemporary theater. He discussed his experience with the theater’s Lectrosonics wireless equipment—all of which employs the company’s highly acclaimed Digital Hybrid Wireless technology.

“The American Conservatory Theater’s presentation of 1776 commenced in September and will play through mid-October,” Kennedy reports. “The Lectrosonics equipment used for 1776 is the theater company’s house system, which includes four Lectrosonics Venue series receiver mainframes—each one fully stocked with six VRT receiver modules for a total of 24 channels neatly housed in four rack spaces. They have a rich assortment of transmitters, including four SMV Super-Miniature beltpacks, eighteen SMQV dual battery Super-Miniature beltpacks, two HM plug-on transmitters for use with handheld microphones, and six SMDa Super-Miniature transmitters.”

“Even though the house system consists of 24 channels, we actually required 26 channels for this production,” Kennedy explained. “As I was unable to secure additional Lectrosonics equipment, I found myself augmenting the Lectrosonics system with a competing manufacturer’s gear. Fortunately, the two systems complemented one another. Lectrosonics’ audio quality is excellent.”

“I was particularly impressed with the build quality and the compact form factor of the Lectrosonics equipment. The small Lectrosonics transmitters are ideal for fitting in wigs and tight costuming situations and are really rugged. I also appreciate the fact that the LectroRM app for iPhone and iPad is available, as this handy tool makes it very easy to adjust audio level, frequency settings, and other system parameters when the SM transmitters are buried deep within wardrobe.”

When queried about his experience with Lectrosonics’ customer and technical support services, Kennedy offered a short, but complimentary assessment. “I haven’t had any interaction with the company because everything works as expected and nothing has ever failed.”

As he turned his attention back to the business of his clients, Kennedy offered these final thoughts about the Lectrosonics equipment used on ACT’s presentation of 1776, “I have nothing but good things to say about the Lectrosonics units. They blend perfectly with the supplemental units that we used on the show and work very well with costuming—enabling us to easily hide the bodypack transmitter. Knowing that Lectrosonics is such a dominant presence in the broadcast market, it’s good to see them doing such good work in theater.”

To learn more about the services of Kevin Kennedy, contact him at This email address is being protected from spambots. You need JavaScript enabled to view it..