INDIANAPOLIS, INDIANA: Tracing its roots to 1924, East 91st Christian Church in Indianapolis has emerged as one of Indiana's most noteworthy houses of worship. That reputation has been aided by the sheer size of the sanctuary itself, built large enough to house the largest Schantz pipe organ in the Hoosier State. 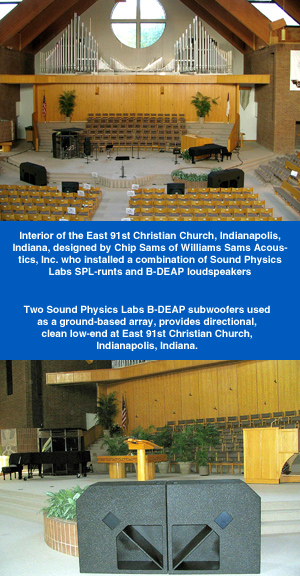 With size have come problems, though, particularly as the church has worked to get in step with the changing times. Like many other churches, East 91st has sought to introduce more contemporary services into the mix in a bid to stay as relevant as possible to the sight-and-sound savvy younger generation. Unfortunately, for all its grandiose size, the facility leaves a lot to be desired as a sound hall, complicating the church's quest to improve its contemporary worship services.

That was the reality that greeted the church's incoming creative programming minister, Don Smith, and the sound expert he consulted early last year, Chip Sams, principal consultant at William Sams Acoustics, Inc., Orlando, Florida. On seeing the facility, Sams concurred with Smith's assessment that the building was an "acoustical and systems nightmare." Nevertheless, Sams accepted the challenge.

"The task was to adapt an enormous, reverberant room, built to house what I'm told is one of the largest pipe organs in the state, to facilitate contemporary music services," Sams says. "Some attempts had been made in the past to upgrade the sound system, but many were clearly not well-advised."

Working within the acoustical constraints of the facility, which couldn't be sufficiently remedied with architectural redesign or acoustical treatments, Sams developed a multi-faceted solution based on retaining and correcting adjustments to all components of the system that were still viable for the next few years, while replacing those that were never appropriate to begin with. From a new console to new speakers and amplifiers to a new wireless microphone system, the church received an audio facelift without a major architectural renovation.

Not surprisingly, powerful and adaptable loudspeakers from Sound Physics Labs, a leader in cutting-edge speaker development, located in Glenview, Illinois ended up playing a central role in making the venue more hospitable to the needs of contemporary worship. Specifically, Sound Physics B-DEAP 32 bass speakers, deployed on the ground in two arrays of two each, proved to be an elegant answer to vexing low-frequency acoustic problems that were inherent in the architecture.

"Prior to the B-DEAPs, omni-directional vented box subs had been placed upstage of nearly all microphones and produced a very muddy bass rumble," Sams says, noting they merely excited the room's reverberance and provided little direct sound.

Since cost, structural and sightline restrictions precluded the preferred solution of a flown directional bass array, a creative solution had to be found within the constraints of available ground space near the platform.

"The best arrangement we were able to come up with was to use the most directional ground-based array possible, and set them up to be deployed by volunteers in the 15-minute changeover between traditional and contemporary services," he says. "The B-DEAP 32 was truly the only bass speaker on the market capable of fulfilling all of our needs for a shallow, but wide, footprint and reference quality sub-bass and mid-bass from the same enclosure. It has sufficient pattern control to noticeably diminish excitation of the room volume above and behind the platform, while covering as many seats within critical distance as possible." Now, most of the audience can clearly make out bass guitar melody lines and a kick drum has the punch it needs.

The SPL-Runt, another Sound Physics product, provided a worthwhile upgrade for a pair of flown balcony delay speakers which were capable of sounding good in a small room, but could not sufficiently control sound dispersion at mid-range frequencies to succeed in a large, reverberant space.

"A pair of the Runts provided a significant improvement in direct-to-reflected energy ratio in the balcony seating area, while also dramatically reducing the amount of sonic bleed back into the main seating area," Sams says. The Runts, he says, have no performance rival in an enclosure of its size and weight.

In addition to the main sanctuary, Sams also addressed a different set of audio problems in a renovation of another facility that houses overflow from the main sanctuary. There, Sams specified Sound Physics B-DEAP-R subwoofers. "Down-firing on low stands, the B-DEAP-R's produce a much tighter and deeper low-frequency sound in this much more intimate space," he says.

While much of Sams' work was loudspeaker-related, he also took on the challenge of moving the church to an entirely new wireless microphone platform. Although East 91st had already been using an assortment of wireless systems, the church had a pressing need for both additional mics and a solution that would provide a standard that would make future wireless system growth easier to accommodate.

"The church's wireless situation gave us an opportunity to standardize all of the church's bodypack systems on an emerging technology that considerably outperforms anything short of esoteric units costing several times as much per channel," Sams says.

Among the benefits the church will get from the Venue system is an absence of RF dropouts and elimination of compandor circuit noise via Lectrosonics' proprietary Digital Hybrid Wireless™ audio.

Relatively new to the market, the Lectrosonics Venue system was essentially beta-tested at the church. Having been in operation for several months, Sams says it's worked so well that the church is eyeing the possibility of adding Venue systems for more wireless needs across its campus.

"With a far more robust RF platform than I've seen in most live sound applications, the Venue system should serve "he says.