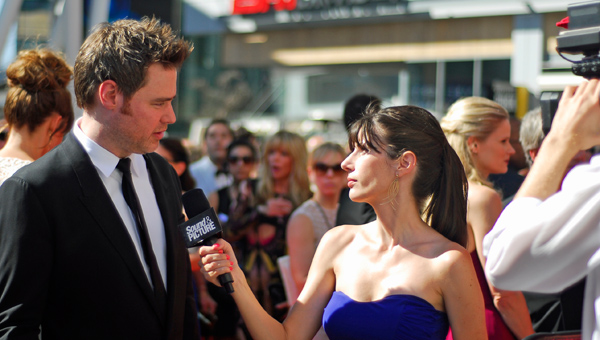 Sound & Picture’s Daron James served as the producer of the red carpet interviews while Lauren Mora served as the host. Mora and James conducted interviews with guests and nominees prior to the start of the Creative Arts Emmys ceremony. For this project, James worked behind the scenes—producing and operating the camera that was outfitted with a Lectrosonics dual channel slot mount ENG receiver. For her interviews, Mora used a Lectrosonics HH handheld transmitter outfitted with the HHC cardioid capsule and an HHXTND mic flag extender. James discussed the attributes of the Lectrosonics wireless system, which employs the company’s acclaimed Digital Hybrid Wireless® technology.

“The interviews took place just a few feet away from the Nokia Center,” James explained. “We interviewed everyone from celebrities to production types, including sound mixers Stephen Tibbo of Modern Family, Frank Stettner of Boardwalk Empire, and DP Rob McLachlan with Game of Thrones. For this project, the SRb was outfitted with a Lectrosonics SRBATTSLEDTOP battery sled that was powered by a Sony NP-F570 as well as the company’s SRSLEEVE that enabled the SRb to be mounted to the camera. I was really impressed with the system’s RF performance. Being in downtown LA, there’s potential RF interference coming at you from all sides. We also had to contend with frequencies being used for the show inside the Nokia and, of course, there were all the additional media organizations next to us fighting for an open frequency. There were over 100 different media outlets along the red carpet, so it was pretty busy from an RF perspective.”

“I love the fact that the Lectrosonics equipment makes it so quick and easy to identify and lock down an open frequency,” he continued. “One simple SRb scan showed several available frequencies, and I was able to select an open channel to pair the HH transmitter in a matter of moments.”

James was equally enamored with Lectrosonics’ ability to achieve a good, strong signal amidst all the ambient noise coming from seemingly everywhere. “The noise floor of the red carpet can be daunting, so setting a proper level is important,” he reports. “Since our host’s proximity to the SRb receiver was close, I was able to set the transmitter’s power to 50mw. I discovered that setting the gain on the HH to 0 worked out best—enabling Lauren to speak at a normal level while not attracting too much attention from the bustling red carpet activities. As the event progressed and the red carpet became more crowded with guests and nominees, I could quickly and easily adjust the level on the SRb receiver with only a few button clicks. This approach enabled us to keep the noise floor down.”

For an event of this nature, having confidence in the equipment’s ability to deliver is crucial. Here, too, James reports he couldn’t be happier with the Lectrosonics system, “The Lectrosonics equipment was really intuitive to operate. I had one or two questions going into the event and Karl Winkler (the company’s Director of Business Development) was extremely supportive in providing the information I needed.”

Reflecting on the events that took place, James offered this final assessment of his experience with the Lectrosonics wireless system. “We couldn’t be more content with the quality of audio we recorded using the Lectrosonics wireless equipment,” he says. “The sun was very bright on Emmy day, but I had no problems viewing the SRb’s LED while I was scrolling the membrane switches on the unit. From reaching out to Karl, to scanning Block 22 to find available frequencies, pairing the devices, and setting levels throughout the day, everything went really well. It was so easy. I couldn’t be happier with the way the production turned out.”