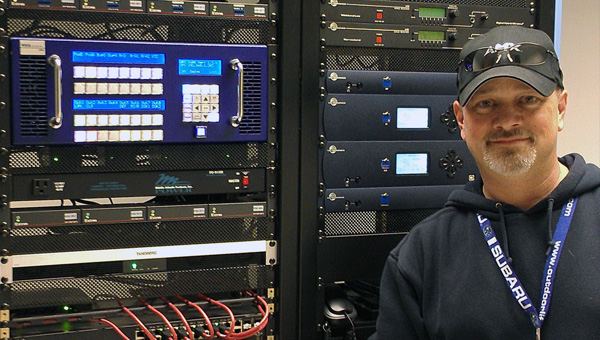 Littleton, CO – August 2013… For companies and organizations with multiple locations, the ability to teleconference and exchange ideas and information is essential to conducting business. The process of assembling a reliable, easy-to-use system, however, remains one of the ongoing technological challenges for many companies. To ensure the deployment of a world-class, intuitive, and trouble-free system for their applications, Monroe, LA-based CenturyLink, Inc., the third largest telecommunications company in the United States, had a new system installed at their Littleton, CO facility—and central to its operation is a collection of Aspen audio processing equipment from Lectrosonics.

Johnstown, CO-based Singularity Technologies, a design / build firm that specializes in providing AV solutions for a variety of businesses, was contracted to design and deploy the new conferencing system for CenturyLink’s Littleton, CO complex. Matt Zavakos, President of Singularity Technologies, discussed the project and his firm’s decision to include a Lectrosonics Aspen system consisting of an SPNDNT full function DSP mixer/processor with Dante audio networking capability, an SPN1624 (16 Input / 24 Output) processor, an SPNCONF audio conferencing / telepresence interface, and an SPN32i 32-input expansion unit.

“The Aspen system handles all audio mixing, interfacing, and distribution for CenturyLink’s corporate auditorium in Littleton, CO,” Zavakos explained.  “All microphones and source audio are processed and mixed via the system and output to a seven zone mix-minus, overhead sound system. Additionally, the Lectrosonics SPNDNT processor is utilized to allow for numerous additional inputs, outputs, and mixes to be tied into an audio engineering mixing console that facilitates multi-camera shoots and streaming to CenturyLink’s internal IPTV solution for company wide distribution.”

When queried about those project requirements that ultimately led to the selection of the Lectrosonics Aspen processing equipment, Zavakos offered the following thoughts. “CenturyLink wanted a top notch audio system that would consistently perform well whether it was being used for a single audio teleconference, a multi-point video teleconference, or company-wide streamed town hall meeting. The quality, flexibility, and well thought out functionality of the Lectrosonics Aspen equipment made this an easy choice. The Aspen system’s proprietary gain / sharing algorithm for automixing is the best in the world and I have installed a lot of Lectrosonics systems for very happy clients.”Matt

In today’s sophisticated AV environments, automation plays a huge role in simplifying the operation of the many types of equipment utilized in corporate conferencing setups. The CenturyLink installation designed and installed by Singularity Technologies is no exception. In this particular case, the Lectrosonics Aspen processing equipment is interfaced via RS-232 with an AMX control system.

When designing and implementing AV systems on the scale of the one at CenturyLink, technical questions inevitably arise. On that note, Zavakos considers Lectrosonics’ customer and technical support services to be exceptional, “We rely on Lectrosonics because of their dedication to standing behind the products they design and sell. Bar none, Lectrosonics is one of the best companies in the industry to work with—not only because they engineer good products, but because they are heavily invested in supporting customers like us when we install their gear as part of our AV solutions. Just being able to call and talk to one of the dedicated, talented, and friendly people in their Rio Rancho, NM headquarters is a big differentiator for us when we decide to include their products in our complex installs.”

The CenturyLink AV system installation was completed in March 2013 and has been in regular use since that time. According to Zavakos, his client is very pleased. “Our client is very happy with the result of this extensive rebuild of their auditorium,” Zavakos reports. “The first time we spoke into one the microphones and they heard the system, the response was disbelief that it could sound so good. The system exhibits great tone and automixing, resulting in phenomenal gain before feedback. In addition, the quality of the teleconferencing / VTC audio makes them very happy. I have worked with Lectrosonics for 20 years and hold them in the highest regard. I am continually impressed with their products and the staff. Lectrosonics is, by far, one of my favorite vendors to deal with and I count quite a few of them as friends.”

To learn more about Singularity Technologies, visit the company online at http://singularity-technologies.com.