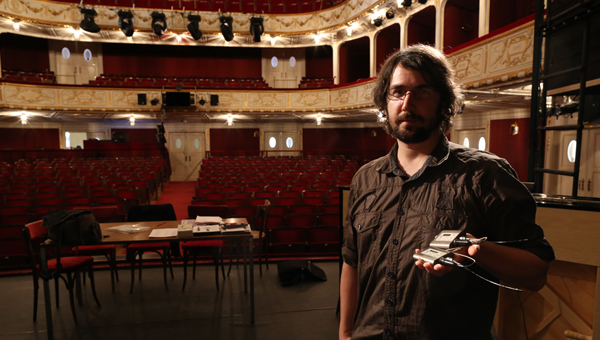 Baden, Lower Austria, Austria – August 2013… Located in the northeastern-most state of the nine states in Austria, Bühne Baden—formally known as Theater Baden Betriebs GmbH.—is one of the leading theatrical houses in the country. Offering a broad range of performances, including spoken-word theatre, opera, operetta, musicals, plus classical, rock, and pop concerts, Bühne Baden employs wireless microphones on a regular basis. In an effort to improve the audio performance of their wireless systems, the venerable theatre recently upgraded to Digital Hybrid Wireless® technology from Rio Rancho, NM-based Lectrosonics.

Vienna, Austria-based TON Eichinger Professional Sound Systems, which provides audio equipment sales and rentals in addition to acoustical and audio restoration services, was contracted to handle the theatre’s wireless system upgrade. Othmar Eichinger, the company’s technical director, discussed the nature of the project and the factors that led to the sale of the Lectrosonics equipment.

“Bühne Baden wanted to upgrade their wireless microphone system to match the high-end digital mixing setup recently installed by our firm,” Eichinger reports. “In addition to seeking equipment that offered superior audio performance compared to their prior wireless system, they really stressed the importance of transmitters that were resistant to perspiration, and had a slim, compact build that could be more readily hidden on the talent. After performing a thorough on-site spectrum analysis—the results of which I included in the frequency planning—I specified a system that incorporated thirty Lectrosonics transmitters, including SMDB/E01 beltpack transmitters, HH/E01 handheld transmitters, and HM/E01 plug-on transmitters. On the receiving end, I chose a 24-channel Venue system consisting of four modular receiver mainframes, each stocked with six VRS receiver modules.”

Eichinger was particularly complimentary of the Lectrosonics Venue receiver’s design. “Before upgrading to Lectrosonics,” he explained, “they had to use a big equipment rack with double receivers and splitters, plus extra antennas with combiners. This equipment occupied a lot of rack space. By contrast, the 24-channel Lectrosonics Venue system occupies a mere four rack spaces. With this benefit alone, they will never change back!”

In addition to the system’s overall space efficiency, Eichinger was equally complimentary of the Lectrosonics equipment’s additional attributes. “The Lectrosonics system delivers perfect sound with higher dynamic range—free from the sonic artifacts that wireless systems using a compandor frequently exhibit. I also like the redundant powering of the SMDB transmitters and their very compact form factor, which makes them easy to hide on tight dancer's costumes.”

“There is one additional feature that can’t be beaten,” Eichinger continued. “When actors unintentionally swap the transmitters, which can easily occur when multiple actors have identical costumes, and the sound guys don’t know about this, they can always set the correct frequency before the actors enter the stage via the Lectrosonics RM remote or the iPhone audio-remote app—without removing the transmitter from the costume!”

Since deploying Bühne Baden’s new Lectrosonics wireless microphone system, Eichinger reports the system has performed above and beyond expectations, “When they first started using the Lectrosonics system, their expectations were exceeded. The sound is really clean, with lots of detail and the range of clean reception is considerably greater than it was with the previous system. The audio tech can receive actors in wardrobes without any extra antennas, whereas the previous installation used extra antennas near wardrobes plus antenna-combiners to be able to reach the required distance. Bühne Baden’s new Lectrosonics system has made a dramatic difference in all the theatre’s presentations.”