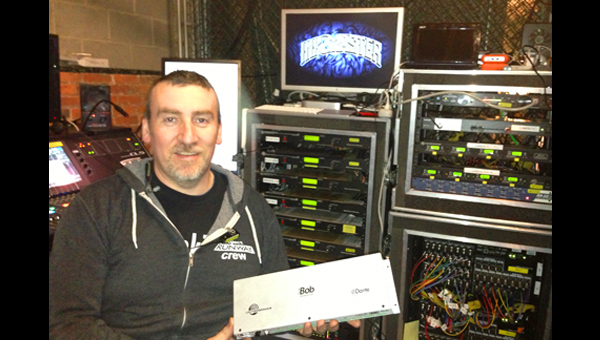 Rio Rancho, NM… For those with a fascination for body art, Spike TV’s Ink Master is ‘must-watch’ TV. Sixteen of the country’s most skilled tattoo artists compete for $100K and the title of Ink Master. ‘Living Canvasses’ are permanently marked in a series of extreme challenges that push the contestants to their limit in this high-stakes elimination competition, hosted by rock legend Dave Navarro and judged by tattoo icons Chris Nunez and Oliver Peck. The show’s production utilizes a lot of wireless microphones and audio processing / networking technology—all of it coming from Rio Rancho, NM-based Lectrosonics.

Martin Kelly is the Audio Supervisor on the show. This BBC trained Londoner has worked in motion pictures and TV for over 23 years and Comedians in Cars with Jerry Seinfeld and The Royals for BBC America are among his recent credits. Stating that he loves the technical challenges of reality TV, Kelly discussed the Ink Master project and his selection of a vast array of Lectrosonics equipment.
“For Ink Master,” Kelly explained, “we’re working with Lectrosonics VR Field receiver systems that are outfitted with both VRT and VRS receiver modules. We’re using 84 channels—with the Studio and Location rigs each equipped with 42 channels on frequency blocks 19, 20, 21, 24, 25, and 26. There are sixteen Lectrosonics T4 IFB transmitters for camera transmission feeding sixteen UCR411 receivers as camera hops. Further, there are another sixteen UCR411 receivers that are used for two 8-track location mixer bags.”

As part of the massive equipment setup, Kelly reports using 28 Lectrosonics SMQV Super-Miniature dual battery transmitters, 3 SMa Super-Miniature transmitters, and 4 UM400a beltpack transmitters for the talent in both the studio and on location—all of which utilize Lectrosonics’ acclaimed Digital Hybrid Wireless® technology. Additionally, there are SNA600 Adjustable Dipole Antennas and ALP500 shark fin antennas with PF25 passive filters in use.

“In order for us to have complete control of the entire audio stream within our 80,000 square foot production complex, which is completely RF live, we’re using Lectrosonics’ ASPEN SPNDNT Dante™ DSP mixer / processors, a DNTBOB general purpose interface, and ASPEN SPN2412 and SPN1624 audio processors,” Kelly continued. “Two SPNDNT units in the studio control camera and IFB mixes while the SPN2412 and SPN1624 audio processors are used for the location rig. The DNTBOB provides additional Dante channels for foldback and monitoring, for a total of 75 Dante channels as needed.”

“This show is very reliant on wireless microphones: 44 of them, in fact, with 40 for the talent and 4 wireless booms, along with camera transmitters plus IFB and ENG multitrack,” Kelly said. “The ASPEN units are key in routing and controlling the flow and dispersal of audio—both in our studio setup and on location. We’re utilizing a touchscreen system to create multiple camera mixes through Dante. In addition to the 62 active record tracks, we utilize the DNTBOB to expand the number of Dante tracks available, which enables us to route camera returns mixes to the board for monitoring.”

When asked about his clear preference for Lectrosonics equipment, Kelly offered the following, “I use Lectrosonics because of its robust performance, the exceptional audio quality, and its reliability. Their field gear is built like a tank. The equipment has no easily broken knobs and switches, and the casing looks new—even after years of abuse. After approximately 13 years of using Lectrosonics products, the company’s equipment remains a key production element on nearly all my shows.”

As he prepared for another day’s production, Kelly offered these final thoughts, “I love working with Lectrosonics gear and my dealer, Gotham Sound and Communications, Inc. in New York, has been terrific as my Lectrosonics dealer. In addition to the wireless technology, the ASPEN processing equipment and its ability to operate on a Dante network is a huge plus. I can’t wait to see what the new generation of products is going to be, and how we can incorporate them into our workflow!”

To learn more about Martin Kelly, contact him via This email address is being protected from spambots. You need JavaScript enabled to view it..