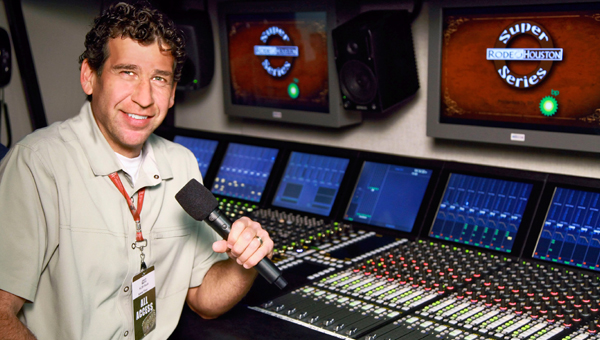 Houston, TX… The Houston Livestock Show and Rodeo, held at Reliant Stadium, is the world's largest live entertainment and livestock exhibition featuring a regular-season world-class rodeo. This year’s show, which ran from February 25th through March 17th, attracted more than 2 million spectators and was supported by more than 24,000 volunteers. Getting all the various announcements to both the on-site spectators as well as those following on TV via Fox Sports Southwest is a very involved process—and it included the use of wireless microphone systems from Rio Rancho, NM-based Lectrosonics.

Houston, TX-based Jason Martin Audio provides a variety of services to the professional audio community, including equipment rentals and consulting. Owner Jason Martin—an A1 with an extensive list of credits—regularly supplies Fox Sports Net, operator of regional sports networks for cable TV, with equipment for their televised programs. He’s a big fan of Lectrosonics’ Digital Hybrid Wireless® technology and houses an impressive inventory of product for his rental business. As the ‘go-to’ guy for wireless microphones during this year’s Houston Livestock Show and Rodeo, he discussed the nature of the project.
“For this year’s event, I used Lectrosonics Venue receiver mainframes outfitted with VRT receiver modules,” Martin explained. “The primary system involved eight wireless channels using a combination of six Lectrosonics HH handheld transmitters and two SMQV Super-Miniature beltpack transmitters. These particular models were chosen both for their audio performance and for their robust build quality. The setup was augmented by a combination of Lectrosonics SNA600 adjustable dipole antennas and some helical units as well.”

“The Houston Livestock Show and Rodeo is a huge and complex event,” Martin continued. “In addition to accommodating the various announcements that were directed to the spectators, these signals were also fed to Fox Sports Southwest for broadcast. The broadcast booth was located hundreds of feet above the action on the field, so range was a critical factor. The Lectrosonics wireless systems delivered amazing results.”

Predictably, a livestock show and rodeo is a dirty, dusty place—particularly down in the trenches where all the action occurs. While the distance from the ground floor to the broadcast booth was certainly a concern in order to ensure dropout-free performance, the dirt and dust of the environment is problematic for electronic equipment. Here, too, Lectrosonics gets high marks from Martin. “The build quality of the Lectrosonics gear is one of its most impressive features,” states Martin. “Everything is built tough—with metal casings, sealed membrane housings for the displays, and so forth. For a project like this, Lectrosonics build quality was essential.”

The Lectrosonics HH handheld transmitter played an integral role at this year’s Houston Livestock Show and Rodeo. The talkback button on the HH handheld transmitter enabled Martin to configure the equipment setup for both announcements and communication among the staff. “Announcer Boyd Polhamus would go to the floor of the Houston Livestock Show and Rodeo to make announcements with the HH handheld transmitter,” Martin explained. “Because there’s a push-to-talk button on the transmitter, I was able to route the signal from his mic—take it off air—and route it to the play-by-play announcers’ monitors in the stand. The announcers could communicate back and forth behind the scenes utilizing his HH transmitter and the IFB wireless system we created. This feature proved invaluable on this project.”
In addition to the equipment’s solid performance attributes, Martin is equally enthusiastic about Lectrosonics customer and technical support services, “The Lectrosonics gear sounds great and it’s extremely well built,” he says, “and the company’s customer support services are just as impressive. Of the few occasions the equipment has required any kind of update or other service, Lectrosonics performed the required servicing quickly—and that’s extremely important in this business.”

Reflecting on the challenges the Houston Livestock Show and Rodeo presented, Martin offered these final thoughts. “Everyone was extremely pleased with the performance of the Lectrosonics wireless gear,” Martin reports. “As a broadcast A1, it gives me great assurance knowing I work with Lectrosonics wireless. The equipment delivers in every way—inspiring confidence in the process.”
For additional information about Jason Martin Audio, visit the company online at www.jasonmartinaudio.com.  To learn more about the Houston Livestock Show and Rodeo, visit them online at www.rodeohouston.com.