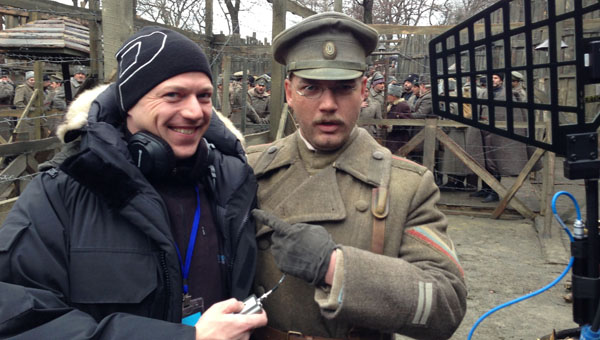 Moscow, Russia – March 2013… In the business of location sound, there are three constants all audio engineers must address when it comes to wireless microphone usage: sound quality, range, and reliability. The challenge comes amidst the ‘real world’ conditions on the set, where dust and dirt, heat, moisture, and a host of additional variables tend to complicate matters. That’s why Prague, Czech Republic-based production sound mixer Igor Pokorný relies on his arsenal of wireless transmitters, receivers, antennas, and more from Rio Rancho, NM-based Lectrosonics.

“My most recent project,” states Pokorný, “is a movie called Sunstroke. This project is based on author Ivan Bunin’s novel of the same name and is directed by Nikita Mikhalkov. It’s a Russian historical drama covering the beginning of the 20th century through the end of Russia’s civil war in 1920. For this project, I used SMQV and MM400c transmitters with Sanken lavaliere omnidirectional microphones on the actors with the VR Field receiver system. For delivering sound to the director, script supervisor, and my boom operators, I used the UM400 transmitter and they’ve been monitoring via the UCR100 receivers with headphones.”

When queried about those aspects of the Lectrosonics equipment he finds most appealing, Pokorný offered the following thoughts. Upon taking delivery of some Lectrosonics equipment from Bystrouška sound studio in Prague,” he said, “I shot two films and found the sound quality, range, and reliability to be exceptional. Unlike previous systems I had used, the Lectrosonics equipment was much less prone to dropouts—particularly when used with the antennas. I found the Lectrosonics gear to be an ideal solution for shooting movies with big scenes, numerous cameras, yet only limited setup time. I also discovered that the SMQV transmitters—because of their very small form factor—made a great choice for concealing among wardrobe.”

Pokorný also offered some thoughts regarding Lectrosonics’ ease of use. “One of the actors on the set—the main hero—became very interested in the transmitter,” he said. “So much, in fact, that he wanted me to teach him about its various functions. In no time at all, he was changing the batteries and adjusting the audio gain. It just goes to show how intuitive this equipment really is.”

Customer support is yet another area where Pokorný feels Lectrosonics excels, “I experienced an issue where some SMQV transmitters I had just taken delivery of were switching to PLL mode. I wrote to Lectrosonics’ technical support and I received immediate feedback—directing me to a European dealer, Ambient Recording, in Munich. I already had a good rapport with this company and, in no time at all, they changed the firmware. All of this occurred without any disruption to the shooting schedule.”

To learn more about Igor Pokorný, contact him via email: This email address is being protected from spambots. You need JavaScript enabled to view it..