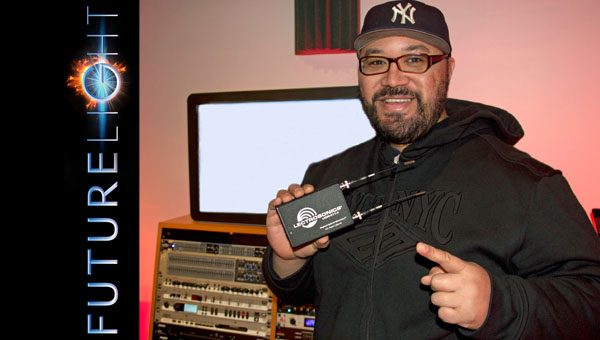 Rio Rancho, NM – February 2013… Be it live show concert sound, location sound recording for TV and film, special events such as the NY Film Festival, theatrical projects, etc., FutureLight Entertainment is a management, production, and creative design company specializing in delivering artistic and revolutionary content for all platforms of entertainment media. With well-known projects such as ABC’s Ugly Betty and concert work for artists such as Pitbull and Carlos Santana to their credit, the ability to deliver the best possible audio quality is a given. That’s precisely why the FutureLight Entertainment team relies on Lectrosonics wireless microphone technology.

Stephanotis ‘Nōtis’ Fulivai is FutureLight Entertainment’s CEO, Head Creative and Field Producer. As an industry trained sound designer, engineer, and music programmer, Nōtis oversees all projects, events, and campaigns the company is involved with. Over the years, he’s used a lot of Lectrosonics equipment, including the company’s LMa beltpack and WM watertight beltpack transmitters, UCR411a compact receivers, and SRb two-channel slot-mount diversity receivers. He discussed his preference for Lectrosonics products and the Digital Hybrid Wireless® technology they employ.

“Lectrosonics’ wired sound quality harnessed in a mobile pack that gives me little or no RF frequency hits makes me call up their gear time and time again,” Nōtis reports. “I’ve used Lectrosonics equipment since 2007 when I was a FOH engineer at the Rio All-Suite Hotel in Las Vegas. During my time there, I always requested products like Lectrosonics’ IS400 wireless beltpack instrument system or R400 diversity receivers in the Tech/Production rider for any event or high level production I was involved in that required a reliable wireless pack for a musician-heavy gig.”

“For me, just seeing the words ‘Lectrosonics’ written down on any tech or production rider makes my life easier from the get go,” Nōtis continued. “I just know I’m going to have a reliable piece of equipment that will work flawlessly and seamlessly in my production and work flow. Lectrosonics’ gear inspires confidence, which is great because it’s one less thing to worry about and, for me; this enables the work pace and energy to be focused on other issues.”

For a recent theatrical production, Nōtis and his crew augmented their LMa and WM transmitters with Lectrosonics’ HM172 earset and M152 lavaliere microphones. “I’ve been really impressed with every Lectrosonics product I’ve encountered,” Nōtis says, “and at some point, I’m going to get my hands on the company’s HH Digital Hybrid handheld transmitter with the interchangeable capsules. I’ve been particularly impressed with the capabilities of that model.”

In addition to the pristine sound quality, drop-out free performance, and RF agility of Lectrosonics’ products, Nōtis is equally impressed with the equipment’s reliability, “In all the time I’ve been working with Lectrosonics gear, I’ve never had a failure. Their equipment is built like a tank. Further, I consider the gear very user-friendly. I’ve never once needed to call and ask for technical assistance. It just works!”

Before shifting his attention to his forthcoming projects, Nōtis offered this final comment. “Having Lectrosonics gear on any project—big or small—automatically brings a high level of production value to what we’re working on,” he said. “The company’s gear delivers instant credibility. I am really thankful for Lectrosonics and all that they do to make all of us in this industry deliver and create the best possible art and media we can.”

For additional information about FutureLight Entertainment, visit the company online at www.futurelightentertainment.com.